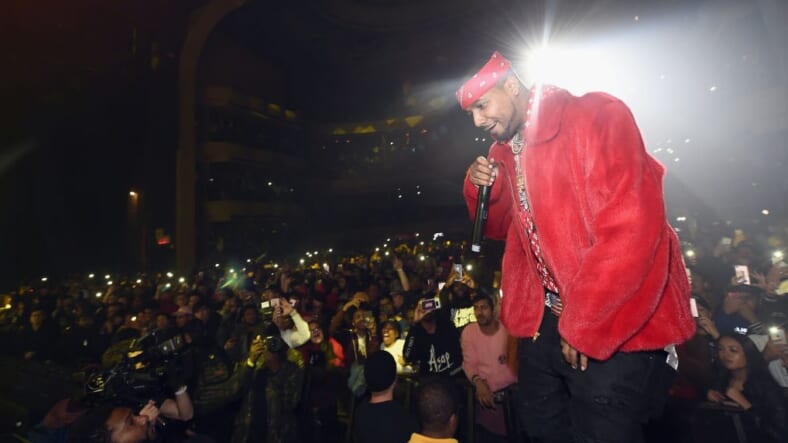 The latest season of “Love & Hip Hop: New York” has come to an end, and it’s the end of the road for one of its stars, Juelz Santana, who is now in prison after delaying his surrender so he could film the show’s reunion episode late last month. Santana turned himself in to Petersburg Medium FCI in Hopewell, Virginia.

As previously reported, the Harlem-born rapper and reality star has been sentenced to two years in prison for having a loaded handgun and non-prescription Oxycodone pills in his carry-on bag as he went through security at the Newark New Jersey Airport. He is being held at a Hopewell Virginia facility called FCI Petersburg Medium, reports the Blast.

Santana tried to get away by leaving the airport in a taxi but ultimately turned himself in three days later.

Santana, whose real name is LaRon James, was facing up to 20 years in prison, but was ultimately sentenced to 27 months instead. Earlier this year, he plead guilty to unlawful possession of a weapon and possession of a controlled dangerous substance. After Santana serves his time, he’ll be under supervision for an additional 12 months.

Santana proposed to his longtime girlfriend Kimbella Vanderhee and the two got married in January ahead of the start of his prison sentence.

The two had been dating on-and-off for nearly a decade and fans were just as thrilled as she was when he finally popped the question while performing at the Apollo Theater.

After nine years together and two children, Vanderhee has dealt with everything from Santana’s infidelity to his drugs addiction. She and the rapper have disclosed this and even more tea about their personal lives and issues on LHHNY, including a therapy session where Santana admits to “dabbling” in prescription pills and opening up about transitioning to “being clean and sober.”

“I had been drinking like a cough syrup, we call it ’lean.’ The hip-hop industry I was in just made it a cool thing and I had a lot of teeth problems,” he shares. “I was prescribed Percocets from the doctor and I kinda’ started abusing that.”

Now Santana has the time to think about how he will turn things around once he gets released in 2021.