‘I want to go back to having fun’: Magic Johnson quits job as Lakers President

The NBA legend whose name is synonymous to the Lakers has stepped down from leading the team after two lackluster seasons to return to a simpler life, he says 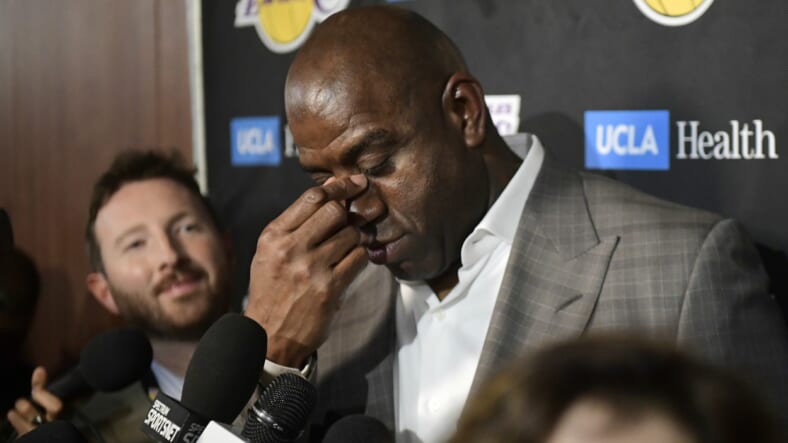 Magic Johnson wipes his eyes as he speaks to reporters prior to an NBA basketball game between the Los Angeles Lakers and the Portland Trail Blazers. (AP Photo/Mark J. Terrill)

In a surprising move, Magic Johnson quit his job as President of Basketball Operations with the Los Angeles Lakers without advanced notice on Tuesday. In an emotional announcement, he told reporters he was stepping down to return to happier times in his life, ESPN reports.

Johnson, who returned to the Lakers in Feb. 2017 to take over the team, has had a difficult two years as the team’s President of Basketball Operations and had not returned the Lakers to championship caliber for the team within that time, said he’s simply in pursuit of happiness.

In speaking to reporters, Johnson said he was tired of the many things plaguing the team ranging from injuries, to internal politics to even betrayals.

“What I didn’t like is the backstabbing and the whispering,” Johnson said. “I don’t like a lot of things that went on that didn’t have to go on.”

Johnson made the announcement ahead of the Lakers’ regular-season finale against the Portland Trail Blazers, in which they lost 104-101. The team, known for multiple NBA Championships through the 80s, 90s and 2000s, have not made a playoff appearance since 2013.

Johnson also put to rest that this unexpected move wasn’t made because of Luke Walton’s future as the team’s head coach. His record in the position so far is 98-148 in three seasons with the Lakers.

“We love Luke [Walton], so I got to make a decision and that’s a tough thing,” Johnson said. “I’m good with where I am. I’m happy. I want to do the things I used to do, so I had to weigh both situations, so this is better for me.”

Johnson’s announcement sent shockwaves throughout the sports community, especially for Buss or general manager Rob Pelinka who was not warned ahead of time of his decision.

Johnson admitted that he didn’t want Pelinka to talk him out of it so instead he told reporters first to cement his decision.

The Lakers released a statement of support and thanks Johnson for his contributions, saying in part:

“There is no greater Los Angeles Laker than Earvin Johnson. … He will always be not only a Lakers icon, but our family.”

Although Johnson worried about Buss’ response, she sent a supportive tweet saying:

“Earvin, I loved working side by side with you. You’ve brought us a long way. We will continue the journey. We love you.”

A source told ESPN that the Lakers franchise is “paralyzed” by Johnson’s announcement.

“Nobody had an idea,” said Rondo. “I didn’t know if it was true or not. What shocked me is how everybody else is shocked. Because nobody knew.

“I walked in … and thought LeBron had retired or something.”

Johnson who is a prolific businessman, said he “ happier when I wasn’t president [of the Lakers],” Johnson said.

“We [the Lakers] are halfway there with LeBron coming. Think this summer, with that other star coming in, whoever is going to bring him in, I think this team is really going to be in position to contend for a championship with the growth of the young players.”

“I’m a free bird and I’ve been handcuffed,” Johnson said. “And I don’t like that. … This is the right time. The right move. The right decision. I’m so happy. I’m a guy who always knows when things are right, and this is right. It feels good.”