What was he thinking? Student banned from prom after racist promposal sign 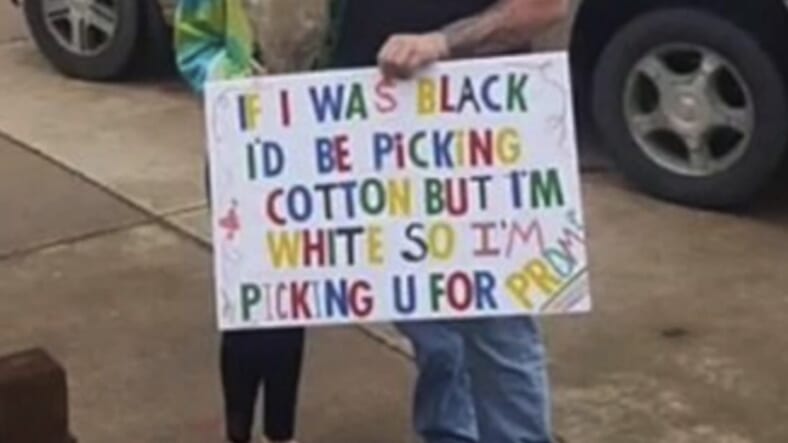 A white high school student in rural Ohio has been banned from his prom after a displaying a racist sign to his intended that is drawing death threats, CNN is reporting.

“If I was black I’d be picking cotton but I’m white so I’m picking u for prom,” the promposal sign read.

The student attends Clear Fork High School in Belleville, Ohio, a small town between Columbus and Cleveland. CNN said it is not naming the student and reported that he has received a number of death threats.

Teachers have spoken with the student, and he understands why his action was wrong and has apologized, Clear Fork Valley Local Schools Superintendent Janice Wyckoff told the network.

In response to a question about how she felt when learning about the sign, the superintendent responded, “What I thought was, how disappointing — this is in 2019; we are still dealing with this stuff, with racial slurs,” she said.

She also recounted the student’s apology, which she said was made via social media.

“I’m sorry for upsetting anyone. I didn’t mean it like that. I’m really sorry. I will say sorry to anyone,” Wyckoff said the student wrote. “I didn’t mean to hurt you or anything like that, it was just for a laugh. I’m sorry, I really am. I’ll say it to your face or anything really.”

Wyckoff told CNN that she would use the incident as an opportunity to teach her students about race.

The very same phrase used on the sign in this incident was used on a sign in another promposal in April 2018 in Sarasota, Fla.

In that case, the sign was condemned by school officials and the local NAACP chapter, and the teen and his parents apologized to the community, CNN reported.

The Florida high school senior and his family on their own decided that he would not attend prom or graduation, according to CNN.