WATCH: Miss USA 2019 has words for strangers who keep touching her hair

Heavy is the head that wears the crown. 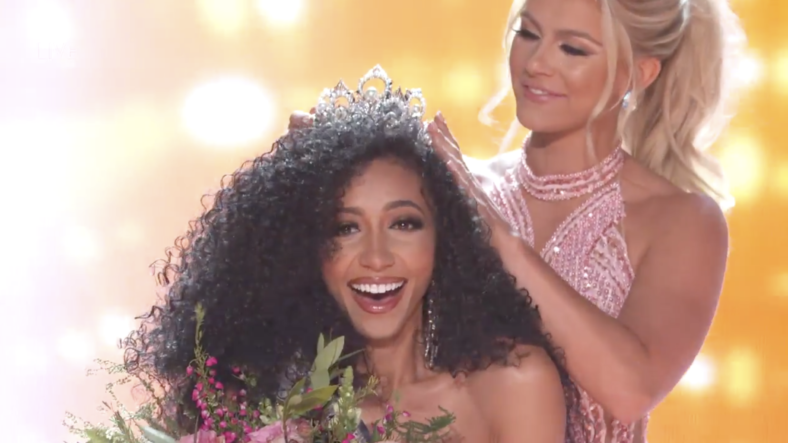 When Solange Knowles sang the words, “Don’t Touch My Hair,” they resonated with just about every Black woman who’s ever been petted without permission.

Turns out the struggle to not have your crown touched by random strangers is an experience that the newly crowned Miss USA also understands all too well.

READ MORE: Great-grandmother gets cuffed by cops at Disney World for having CBD Oil

In an interview with theGrio, the 2019 Miss USA Cheslie Kryst says as much as she loved rocking her natural crown of curls as part of the pageant, these days people keep crossing the line.

“The only issue I find or run across nowadays is there a lot of people who want to touch my hair,” Kryst tells theGrio. “Generally if I’m like friends or really cool with somebody, then I don’t mind. But, if I’m at an networking event like don’t touch my hair.”

“It’s weird. It’s very strange. I’ve been at networking events before while random people will come up and just think ‘Oh my God, you’re so beautiful.’ I’m like please don’t do that.”

Kryst says wearing her hair naturally during the pageant was intentional.

“Winning with my natural hair was really important to me because I thought, this is the way that my hair grows out of my head. I should be OK to wear my hair like this,” she explains.

In addition to being a beauty queen, Kryst, has both a law degree and an MBA from Wake Forest. The 28-year old works as a litigation attorney in North Carolina and does pro bono work to help free prisoners who have been wrongly accused of crimes. She also runs a fashion blog called White Collar Glam in her spare time.

Kryst, who grew up in Charlotte, NC, has an African-American mother (and a former Mrs. North Carolina pageant winner) and a Polish father.

During our interview, Kryst opened up about her journey to understand her racial identity in a world that wasn’t always so accepting of her.

“I call myself a Black woman. That’s how I identify,” Kryst tells theGrio. “When I was younger, there were no identity boxes for mixed race people.”

Cheslie celebrates her MBA graduation with her siblings. (Courtesy of Miss USA)

“My siblings, who are also mixed race, I remember us all talking like you know, are we sandy? Are we tan? At one point in time somebody told my sister…you can’t be mixed. You have to be Black or white.”

“We all talk to each other and figured out our own way and how we should really identify. I think that I had to grow into that and figure out how I identify and what what mattered most to me.”

What’s next for Miss USA

Now that she won the title, Kryst is moving to New York City and preparing for the Miss Universe pageant. She’ll also be advocating on behalf of Dress For Success, a nonprofit that helps women by providing clothing for interviews and supporting their personal advancement.

While she has the spotlight, Kryst wants young Black girls to know that becoming a confident and successful woman doesn’t always happen overnight.

“I didn’t like who I was, but eventually I grew to understand that I’m different and I don’t have to be like everybody else. Love yourself and just be happy with who you are.”

Watch the full interview with Miss USA Cheslie Kryst and theGrio’s Deputy Editor Natasha Alford below and hit us up in the comments with your #DontTouchMyHair stories.