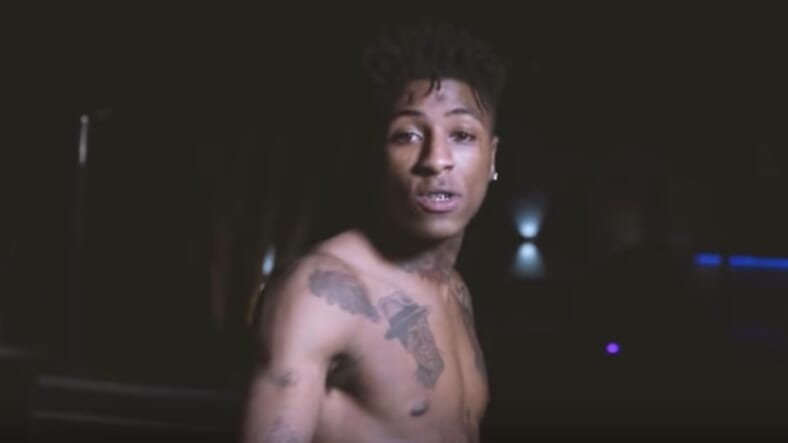 NBA Youngboy has found himself embroiled in another feud. (Photo: NBA Youngboy/ YouTube)

It all started when Molina recently made an appearance on Adam’s show, which he co-hosts with fellow personality, Lena the Plug. During the interview with Adam and Lena, the ex-girlfriend of incarcerated rapper 6ix9ine revealed that NBA Youngboy once slid in her DM inbox, however, it wasn’t for the reason most might assume.

“He sent me a video and cursed me out,” Molina revealed. “Someone asked me on my [Instagram] Live like, ‘What do you think of YoungBoy’s music?’ I think he’s disrespectful so I said, ‘I think he’s an angry little boy.’ Then he hit me up like, ‘Stop talking ’bout me bitch’ and I was like what?”

Apparently Molina’s interview was enough to make Adam guilty by association, as NBA Youngboy took to his own Instagram Live on Thursday, to send the podcaster a stern warning about letting “lying ass h**s” come on his show.

“Aye, say Adam you got one more time to let one of those stupid lying ass h**s come on your show and speak on me, dog. You know damn well that I don’t [sic] with none of them hoes. I seen what she said about me and she don’t even know me! How can you hate somebody…I didn’t even respond to the sh*t,” the 19-year-old Youngboy claimed.

#nbayoungboy says he doesn’t even know #tekashi69 baby Mama #sarahmolina . |#adam22 (view a few post before this one)

However, this is not Youngboy’s first time being in an aggressive situation with another woman, nor is it Molina’s first time calling out rappers for their hostility towards women.

Back in February 2018, footage surfaced of a then 18-year-old Youngboy body slamming and dragging his then 17-year-old girlfriend, Jania, in a hotel lobby. Surveillance footage of the assault was seen on TMZ, and soon went viral all over social media.

Meanwhile, Molina, who has been open about being a victim of abuse herself, took to social media as recently as a month ago, to call out rapper GHerbo for his alleged assault against ex-girlfriend and baby mother, Ariana Fletcher.

#PressPlay: #Tekashi69’s baby mama #SaraMolina offers her 2 cents on the alleged assault between #GHerbo and #Ari ? Was she speaking facts or nah?