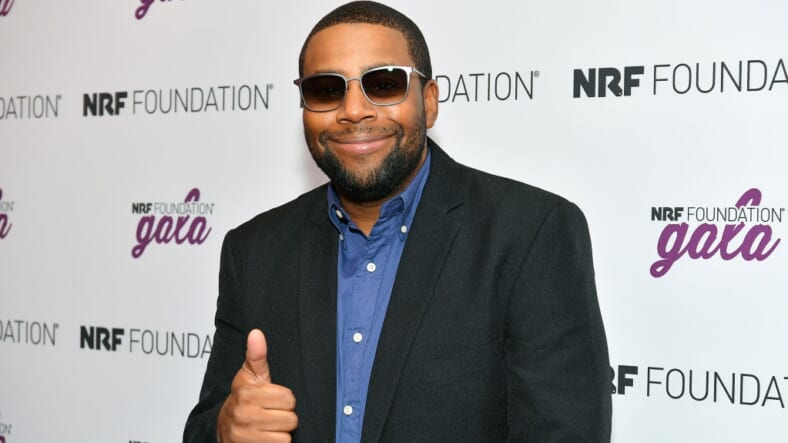 Kenan Thompson just received the thumbs up from NBC for a new sitcom. (Photo by Dia Dipasupil/Getty Images)

The announcement for the 41-year-old Thompson’s single-camera comedy rwent public on the actor’s birthday (May 10). Written by Jackie Clarke, The Kenan Show (aka Saving Kenan), will feature Thompson as a newly widowed father tasked with raising his two daughters.

According to the network’s official website, Thompson’s character “strives to be a super dad to his two adorable girls while simultaneously balancing his job and a father-in-law who ‘helps’ in the most inappropriate ways.”

The half-hour TV special, executive produced by Thompson, will be the third NBC series under this belt.

While many fans speculated whether or not The Kenan Show signaled the star’s departure from Saturday Night Live, Thompson was quick to dismiss those rumors during a recent appearance on The Ellen DeGeneres Show.

“It’s the best job in the world,” Thompson told DeGeneres of his time on SNL. “I can’t see myself just walking away from it like that, even with how busy I’ve been with another show on NBC called Bring the Funny.”

As it stands, Thompson has been the longest running actor on the late-night sketch comedy show, having been on SNL for a whopping 16 years.

Along with The Kenan Show, Saturday Night Live and Bring the Funny – an unscripted competition show in which Thompson plays one of three judges alongside Jeff Foxworthy and Chrissy Teigen- the star may also have a fourth show on his plate.

Back in February, Variety reported that Nickelodeon has plans to revive the kid-friendly comedy sketch show All That, with Thompson to take on the role of executive producer.

Thompson, who made his TV debut on the show back in 1994, told the publication, “It was my first job that I ever had. It gave me an opportunity.”

The Kenan Show is slated to premiere Fall 2019.