Portland Police Bureau said in a statement no one was injured and the man is in custody. 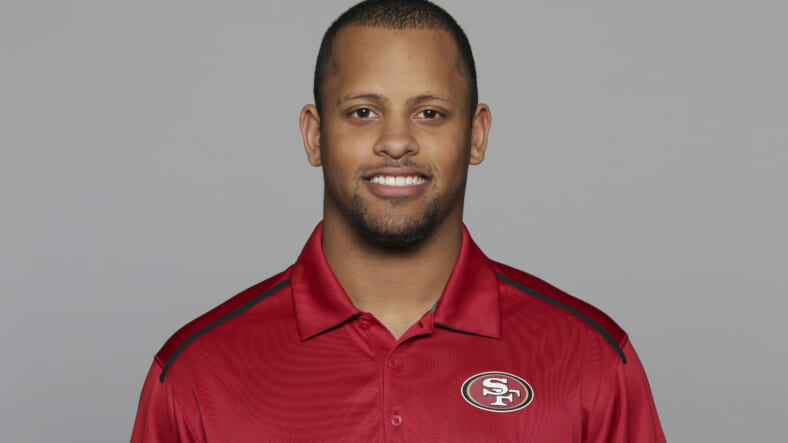 Keanon Lowe a former analyst for the 49ers and wide receiver at the University of Oregon, subdued a person with a gun who appeared on a Portland, Oregon high school campus Friday, May 17, 2019. Lowe is now a coach at Parkrose High School. (AP Photo/File)

Keanon Lowe who was a standout at the University of Oregon is being hailed as a hero after he diffused the situation by tackling an armed student at Parkrose High School where he serves as a football and track coach and a security guard before anyone was injured, The Oregonian/OregonLive reported.

“I’m just happy everyone was OK,” Lowe said four hours after the ordeal. “I’m happy I was able to be there for the kids and for the community.”

Parkrose School District Superintendent Michael Lopes Serrao informed parents through a letter on Friday that two students alerted them that a student was exhibiting “concerning behavior”.

“Thanks to their heroic efforts all students and staff are safe,” Lopes Serrao wrote.

Police spokesman Sgt. Brad Yakots said the gunman was detained by a staff member in the hallway, but he declined to confirm that it was Lowe. A gun was recovered, he said.

The outcome, Yakots said was “the best-case scenario, absolutely.”

“The staff member did an excellent job by all accounts, (and) our officers arrived within minutes and went right in.”

The school and a nearby middle school was on lockdown for hours as police scoured the area and investigated. Students were bused to a nearby parking lot where they were met by their parents.

A senior Justyn Wilcox recounted what he witnessed at the scene.

Wilcox said the gunman, who he said was a student, appeared in the doorway in a black trench coat and pulled out a long gun from beneath his coat, 10 minutes before the end of class, he told The Oregonian/OregonLive.

Students then escaped fled out of a back door because they could not get out the main doorway since the gunman was blocking it.

“As I was running, I was just like, ‘Lord don’t let this be it,’ ” student Alexa Pope told the outlet.

Olivia Katbi Smith said she coaches track with Lowe at Parkrose and wrote on Twitter that he is a standup guy.

“As soon as I heard what happened I knew it was him because he would do anything for these kids. It was surreal to be waiting for my athletes behind caution tape today, but might have been much worse if not for Keanon,” she wrote.

I coach track at Parkrose with Keanon. As soon as I heard what happened I knew it was him because he would do anything for these kids. It was surreal to be waiting for my athletes behind caution tape today, but might have been much worse if not for Keanon. He IS a hero. https://t.co/9jzaUAfEqg

According to his LinkedIn profile, Lowe started his tenure at Parkrose in 2018, as the school’s head football and track and field coach.

Students and parents and his community have taken to social media to call Lowe a hero. The school prom, which is scheduled for tonight is expected to go on.