We waited 8 years for this? The ‘Game of Thrones’ series finale was as disappointing as the entire final season

Do I really need to tell you that there are spoilers ahead? 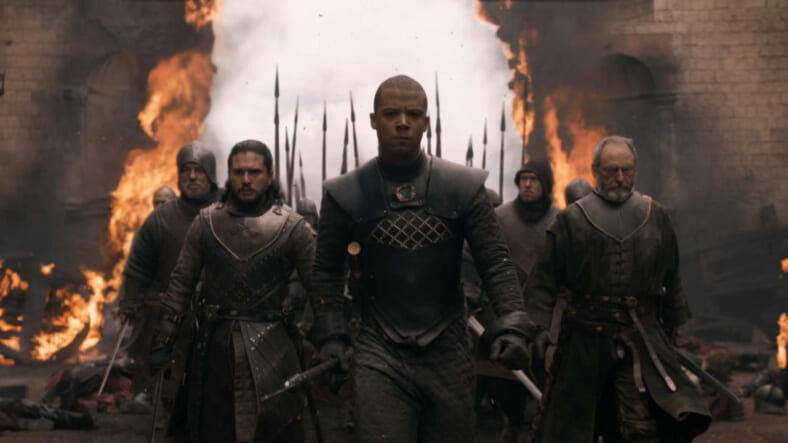 What a fitting coda to a disappointing final season of Game of Thrones.

The series finale, “The Iron Throne”, was the perfect culmination of the five episodes that preceded it – terrible pacing, confounding decisions from characters whose motivations we thought we understood and shit that would have made far more sense had the showrunners just spent more time with it. Instead of sprinting toward the finish line, Game of Thrones started limping, fell down and crawled to it, begging for water the whole time.

No fan of the show I’ve spoken to was as excited for this finale as they wanted to be. The show’s primary antagonists (The Night King, Cersei Lannister) were dead going into the episode, leaving “The Mad Queen” Daenerys Targaryen as the “problem” after she  slaughtered countless innocent people and broke the hearts of everyone who hasn’t been paying attention to her true nature all this time.

Daenerys’ death was probably the most anticipated incident of the episode, so no surprise there. Many folks figured Arya would be the assassin, but instead, it was Daenerys’ homie-lover-nephew Jon Snow, who killed her in the most movie-cliché way possible: in the middle of a kiss. What damn near no one expected was Brandon Stark becoming the “winner” of the game of thrones; there are maybe two or three office pool winners somewhere who are very happy this morning.

The Stark children come out on top, with Sansa being dubbed Queen of the North. Jon is banished to Night’s Watch even though there’s nothing to watch except the cold breath from his mouth. Tyrion Lannister somehow survives to reluctantly become the Hand of the King again. Arya is going god knows where to do god knows what. In a show that had no problems killing off the good guys, I would’ve welcomed a less tidy ending where more beloved characters caught hot death.

The finale still left us with more questions than it answered (How did everyone find out Jon killed Dany? Why the f— is Grey Worm taking all these ships to Naath?), along with a decent helping of incredulity. Why didn’t Drogon murk Jon when he knew damn well Jon just slaughtered his mother? Why did Jon get the exile treatment he did when everyone knows he did the best thing for Westeros?

My ni$$a Jon Snow is the epitome of Good Guys Finish Last. My boy did EVERYTHING right and STILL ended up in the wilderness ???? #DemThrones

Disappointment seems to be the general sentiment of what might be the most anticipated season of television in history. It’s understandably difficult to please everyone when placed in the unenviable position to please so many, but I’m sure showrunners D.B. Weiss and David Benioff wanted to land somewhere better than a petition with more than a million signatures for HBO to remake the whole final season that was drawn up before the season even concluded.

The show had to abandon its source material – George R.R. Martin’s A Song of Ice and Fire series – several seasons ago, apparently because Martin is somewhere fat, happy, rich and generally unconcerned with completing the last book of his series in any kind of hurry. Many believe the show took a dive in quality when the show’s writers took a more Hollywood approach to finishing the story on their own: While the last couple season has been full of the stuff that good television is made of (Dragons! Mass murder! Incest!), the quality of writing has certainly taken a nosedive.

#GameOfThonesFinale that’s was painful to watch ? let’s wait for the books ? pic.twitter.com/SNux2yaBcN

That hasn’t stopped the show’s ever-growing popularity: despite the wishes of HBO, who would’ve loved for their biggest money maker to go on for at least a couple more seasons, Weiss and Benioff wanted to focus on different projects (including a Star Wars film no one asked for). I’m sure tending to the scale and breadth of the single most expensive television show of all time is stressful, but this is what everyone signed up for – not seeing it through with the same level of quality that turned it into such a phenomenon to begin with is a profound disservice to the fans.

Alas, Benioff and Weiss became victims of their own creation and essentially shat the bed. “The Iron Throne” wasn’t a cataclysmically bad ending like Dexter, nor did it confound people who wondered if their cable went out like The Sopranos. But it was “meh, okay” when it should have been so much more.

For a show like Game of Thrones, that’s the most disappointing part.