The actress was honored with the Rising Star Award at the empowering event hosted by Shaun Robinson. 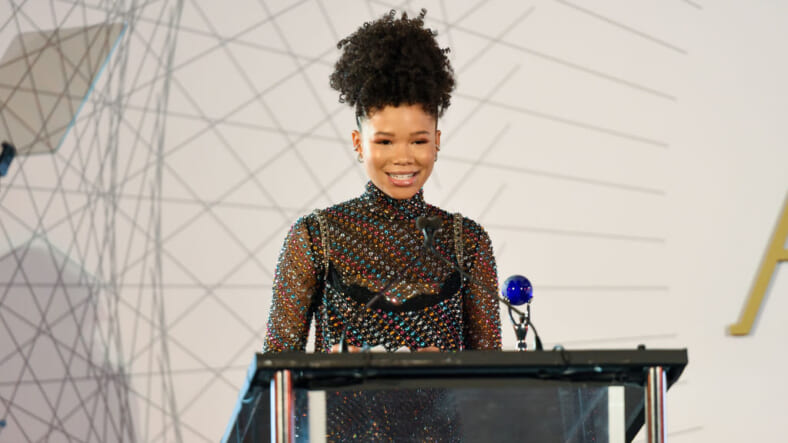 Storm Reid was honored with the Rising Star Award at the 2nd annual BETher Awards Dinner in Beverly Hills on Friday night.

The empowering event was hosted by Shaun Robinson and is dedicated to celebrating women of color who have inspired change and redefined the standard of success in their respective arenas at the 2nd Annual BETher Awards Dinner.

All of the women who were honored delivered inspiring acceptance speeches that highlighted the strength, resilience, and impact of Black women across multiple fields.

We caught up with the Storm Reid on the red carpet to find out how she feels about taking on more mature roles.

“I love it. I feel like this is what I do this for; to tell people stories and to be inclusive and really try to impact people’s lives. To have Zendaya in my corner as a big sister on and off screen is a blessing,” she said of her role on HBO’s gritty new teen drama, Euphoria.

“A lot of people have been saying it is very gritty and it is very heightened in a sense but we are talking about real situations and real things that teenagers go through, so I’m glad to be a part of that conversation. Even though it may be uncomfortable for some, I feel like it’s a conversation that needs to be had.”

She also revealed the most rewarding aspect of her work on Ava DuVernay‘s When They See Us.

“I feel like that project gave those five men a piece of justice that they deserved. I’m not saying it gave them back the years that they lost and the adolescence that they lost back, but people are finally seeing them now,” she said. “The criminal justice system and the media dehumanized them and now people who didn’t see them as humans before see them as human beings. I’m so glad to have been a part of it for that reason.”