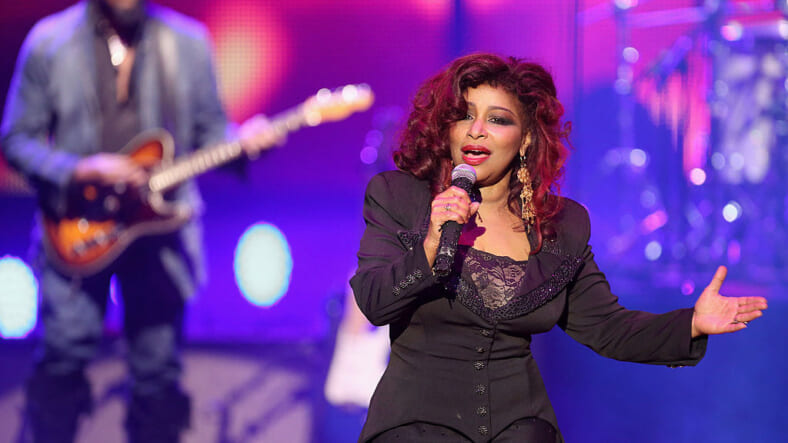 Chaka Khan performs at the GQ Men of the Year Award . (Photo by Sean Gallup/Getty Images for GQ)

Through the Wire, which sampled Chaka Khan‘s 1985 classic Through the Fire, may have been Kanye West‘s breakout hit back in 2003, but now Ms. Khan is revealing she actually hated the remake the moment she heard it.

According to PEOPLE, during Wednesday’s live taping of Watch What Happens Live, host Bravo host Andy Cohen asked the legendary singer, “How did the conversations go with Kanye when he used your song ‘Through the Fire’ on ‘Through the Wire?’”

“Very differently than the song turned out,” Khan responded candidly.

“You were not happy with how the song [turned out]?” Cohen pushed, to which she emphatically responded, “No.”

West notoriously recorded his version while his jaw was wired shut following a nearly-fatal car accident and released it as a song about redemption and pushing past adversity.

“He called me when he got out of the hospital,” Khan continued. “He said, ‘You were so instrumental in my healing process. I had to change the words a little bit to the song, but I had to eat through a wire, you know, and I was wired shut, through a straw.’”

READ MORE: Drugs were a factor in the death of Toni and Tamar Braxton’s niece, autopsy reveals

“It meant that much to me, and it really got my heart,” Khan admitted.

Alas, despite her emotional reasons for agreeing to be a part of the project, when she heard the track for the first time, Khan was artistically turned off by how much the hook to her classic ballad had been sped up.

“I was pissed,” Khan said. “I was a little insulted — not insulted, I thought it was stupid.”

Yikes! No word yet on how West feels about that scathing admission, but you can check out the segment for yourself below.