Sen. Kamala Harris says Trump should be scared to debate her

Is Trump afraid to debate her? She has an answer for that. 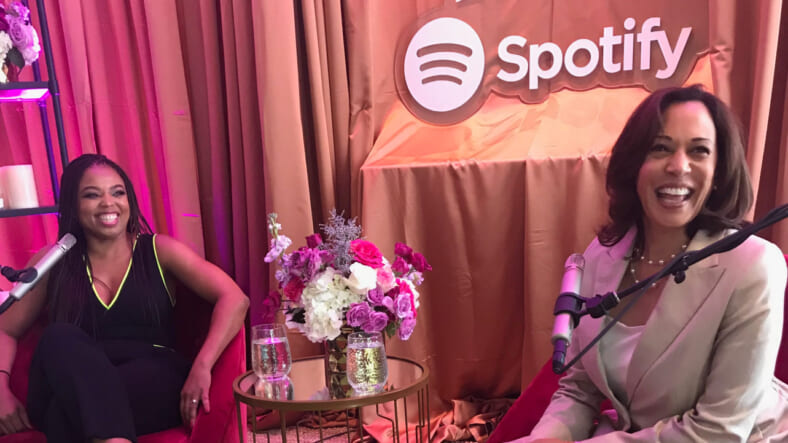 On the latest podcast episode of Jemele Hill is Unbothered, Sen. Kamala Harris (D-CA) pulled no punches. While the senator’s well-known megawatt smile and infectious laugh were on display, the former California attorney general also had a few stern and serious messages to convey.

The fun and informative interview by Hill, a veteran journalist, pulled out some notable quotables from Harris who was at the time of the podcast recording during Essence Fest, firmly in an impressive second place amongst Democratic 2020 presidential candidates. Several Democratic candidates made it down to New Orleans to mingle with the 500,000 attendees of the annual display of #BlackGirlMagic drip, but Sen. Harris is the only one who is actually in the legacy publication’s target demographic. She was in her bag and her answers reflected her comfort level.


Why She Decided to Run
The thing that really at the end of the day compelled me to make the decision to jump in this race and I was talking to my sister about it, is I felt so strongly and really quite emotional. And what this is what I said: “If I don’t get in this race, there is a voice that will not be present on that stage and a voice that needs to be heard.”

Why She Wants to Include Bills Like Rent and Utilities in the Credit Score
So here’s the thing, credit score is your credit score. If it’s good or bad, we’ll determine whether you have access to capital, whether you have access to loans. One of the things that we don’t measure, which I intend to change, is we don’t really have [an] accurate measure of people’s financial responsibility. For example, in your credit scores, they’re not measuring the fact that you pay rent on time. Let’s measure that. Let’s measure the fact that people pay their phone bill on time. Let’s measure the fact people pay their utilities on time because that’s an indication of financial responsibility, which is the whole point of it. Are you financially responsible so that I loan you this money? Well, so I want to change it.


Creating True Pay Equity for Women
So here’s what I’m prepared to do. I’m prepared to say I’m going to shift the burden from that working woman to prove to the employer that she’s not getting paid the same amount for the same work and shift the burden to the corporations to prove that they are paying women equally for equal work. If they are not, they will have to pay a fine, which will be for every 1% differential between what they pay men and women. It will be an equal 1% of their profits from the year before. That’ll get their attention.

If She Thinks Donald Trump is Afraid to Debate Her
He should be.

What Her Favorite Curse Word Is
It starts with “m” and ends in “ah.”

*Mic Drop* And on that note, you’ll have to go check out the entire episode of Jemele Hill is Unbothered to hear the rest of Sen. Harris’ thoughts on a myriad of subjects, including her record as a prosecutor, her candid thoughts on her heated debate exchange with Joe Biden and more.