The opening defied expectations, poised to possibly rake in over $185 million. 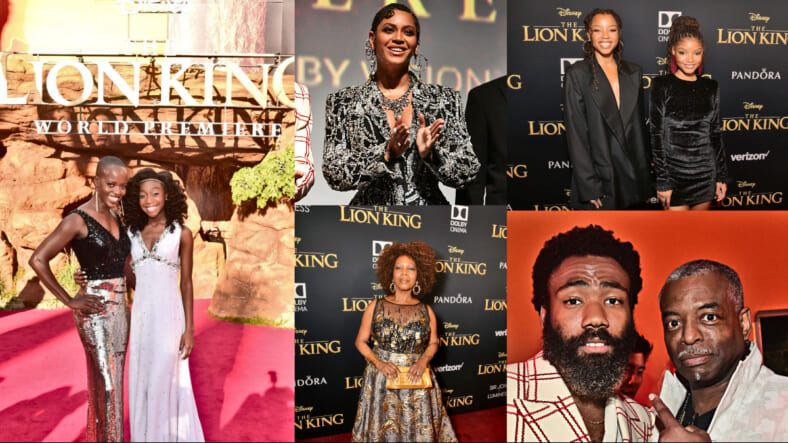 Celebs come out for the World Premiere of Disney’s “THE LION KING” at the Dolby Theatre on July 09, 2019 in Hollywood, California. (Photo by Getty Images for Disney)

The Lion King fans are showing love at the box office this weekend for the movie’s North American premiere, wining praise for the star-studded cast, including Beyoncé.

The film is looking at possibly raking in over $185 million by the end of its opening weekend, estimates showed Friday.

If this number stands The Lion King will be the recorded as the second biggest opening of 2019. The Incredibles 2 currently holds the number two spot coming in at $182.7 million opening weekend, making it the ninth biggest North American launch in history, Variety reported.

Although U.S. box offices have been struggling to draw movie-goers this year, The Lion King surpassed pre-release projections. The original prediction was between $150 million to $180 million in 4,725 U.S locations.

At Thursday night’s preview drew $23 million, which was recorded as the biggest since Disney-Marvel’s Avengers: Endgame. The Avengers set the record in April at $60 million, and grossed a whopping $357 million on its opening weekend, the report notes.

The once animated film is now turned into a photo-realistic movie, directed by Jon Favreau. The movie focuses on a young lion prince named Simba, who eventually has to take over as king of the Pride Lands animal kingdom after his father, Mufasa, is murdered. Although a Rotten Tomatoes rating of 56% has been released, moviegoers are still going to see the film, according to Variety.

The cast of the remake has proven to be star-studded with Donald Glover as Simba; Beyoncé as Nala; Chiwetel Ejiofor as Scar; and Billy Eichner and Seth Rogen as Timon and Pumbaa, respectively.

But not all voices are new, James Earl Jones returns as the original Mufasa from the animated movie that was released in 1994. Although the movie has created buzz, so has the music in the film. Elton John recreated his musical compositions from the original film with Beyoncé’s assistance.

Beyoncé even released a new album called The Lion King:The Gift. She said the project was meant to be “a love letter to Africa.” The album has artists from various African culture and traditions and even a cameo from daughter Blue Ivy Carter on song “Brown Skin Girl”, according to CBS News.