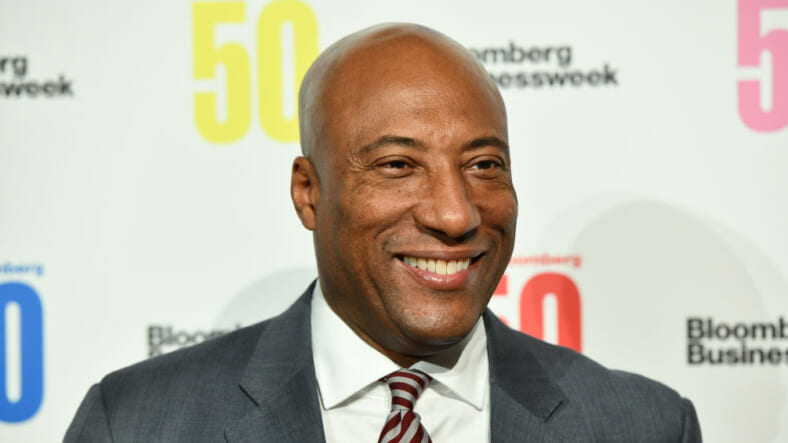 Byron Allen, chief of Entertainment Studios, theGrio’s parent company, is not backing down in his U.S. Supreme Court battle against two cable mega-corporations.

According to an exclusive story posted on Deadline, this fall Allen’s long-running racial discrimination lawsuit against the media giant is set to come to a head. As the $20 billion showdown approaches, on Monday, he slammed Comcast Corp., during an intervention by the Department of Justice.

Essentially, the Amicus Brief fielded last week by the DOJ says they want Allen to prove that race was the singular motivating factor in his claim that Comcast and Charter Communications, which was also named in the suit, were in violation of the Civil Rights Act of 1866.

This prohibits racial discrimination in contracting, when he tried to get the two cable giants to carry his television channels but was denied. He believes that he was treated this way because his Entertainment Studios is African American-owned, something the companies deny. He filed suit in 2015 against them and the court battle has been heating up ever since.

READ MORE: Byron Allen wins another round in racial discrimination cases against cable operators ‘We will continue to win these cases because we are on the right side of history’

“This is historic,” Allen said of the brief which seek to tighten the definitions of a statute that dates back to the 19th century in Comcast’s favor, according to the website. “Donald Trump’s DOJ and Comcast are working together to destroy a civil rights statute in the U.S. Supreme Court.”

“You have one of the biggest media companies in the world, which has been beating up Donald Trump for racism, and now they are saying we will work together to maintain institutionalized racism in America, in this Amicus Brief they delivered last Thursday,” Allen continued.

The DOJ’s action comes as all parties await their November 13 hearing before the Supreme Court. But Allen says it seems to favor the defendants in the case.

“They said, we need to go to the Supreme Court and change the definition of the statute so African Americans cannot use it and we can compromise everyone’s civil rights,” Allen told Deadline.

But the language from the briefing, which can be read here, differs significantly.

“Although the statute does not expressly describe the necessary causal link between a plaintiff ’s race and a defendant’s refusal to contract, the text is most naturally read to require but-for causation, and background common-law principles confirm that a but-for rule applies,” last week’s incensory submission from Solicitor General Noel Francisco and Assistant AG Joseph Hunt argues.

Allen, who serves as chairman and CEO of Entertainment Studios first filed his landmark case in early 2015, along with a $10 billion suit against Charter several months later. Since then both Comcast and Charter have tried to get the matter dismissed and failed.

Last week, the government elaborated on its point by stating that “because ‘making’ a contract means entering a contract, a person does not enjoy ‘the same right’ guaranteed by Section 1981 if race prevents her from entering a contract that a similarly situated white person would have entered. And the inverse is also true.”

The DOJ’s current interpretation of the stature means Allen’s lawyers could be required to prove that race was the only reason that Comcast didn’t place the company’s channels on its distribution services and platforms. Many would argue this is a nearly impossible metric for Entertainment Studios or any other person or entity for that matter, to meet and which gives Comcast and their well-funded lobbyists in D.C. a blatant advantage.

“Comcast, in the name of profits, is compromising everyone’s civil rights,” declared the CEO. “If you think you have a good case, take me to court. Deal with me. Don’t jeopardize everybody’s civil rights.”