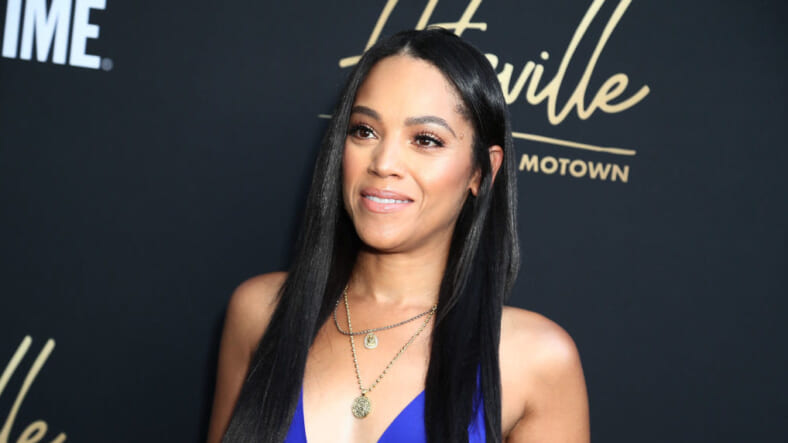 Now in its fourth season, Queen Sugar has endeared itself to a legion of OWN viewers by presenting a beautiful tapestry of Black family life via the Bordelons in Louisiana’s St. Joseph Parish. The highs and lows of family, companionship, and career have been explored at length.

One of the most intriguing characters is that of Darla (Bianca Lawson), the ex-fiancee of Ralph Angel Borderlon (Kofi Siriboe). They share a precious child Blue (Ethan Hutchison). Darla is a former sex worker and recovering addict. Her loving relationship with Blue and roller-coaster connection with Ralph Angel make her a much talked about character.

In episode 10 called “Oh Mamere,” Darla comes face to face with some harsh realities about her past and she struggles to stay afloat.

TheGrio caught up with Bianca Lawson to talk about Darla’s growth on the show, finding light when she has to withdraw to Darla’s darker moments, and whether she thinks Darla and Ralph Angel will get back together.

theGrio: Darla seems to exude a quiet strength. How do you feel about Darla’s story arc over these past four seasons?

Bianca Lawson: I think Darla is one of the strongest characters I’ve ever played. To have that kind of vulnerability and fragility, to be so isolated, most of the time and still find a way to be  positive takes a lot of strength. I love her, I love her journey.

theGrio: This latest episode gets into trauma and PTSD. People think of war veterans and mass shooting survivors  when they think of PTSD, but not necessarily rape or intimiate partner violence. Do you think having storylines like this on Queen Sugar will help the Darlas of the world or help people have more empathy for people like Darla?


Bianca  Lawson: There’s something really powerful dynamic about how they portrayed it in an artistic way. Hopefully people will be more compassionate and like you said, the Darlas of the world can feel less alone. Sometimes, people are very quiet about their trauma, carrying the weight of their pasts on their own. Showing this kind of story on Queen Sugar can help them understand they are not alone and feel okay to talk about it. I feel honored and blessed to tell Darla’s story.

theGrio: Darla has pretty heavy storylines where she is sometimes in very dark places. How do you protect yourself as a person from lingering too long in those dark places?

Bianca Lawson: If you really take a deep dive into a character, there’s always that risk that you could be going too deep too many times. You have to just hang in there and surround yourself with good people, good friends. For me, reading also helps. It’s something that can get me into another headspace.

theGrio: Here’s a curve ball question for you.  What characters on other shows past or present do you think would make good friends for Darla? Darla needs some friends!

Bianca Lawson: Ooooh, that’s a good question. She does need some friends! If I could pick someone, I think it would be Claire Danes’ character on Homeland because she has her own struggles. And I think with her training, she would really get Darla. I think she would have a level of understanding about situations and getting those non-verbal cues.

Bianca Lawson:I wasn’t sure until I watched this latest episode. There’s something about going through so much together. Even if it’s been very difficult, nobody really understands you as well as they do and they have such a deep connection. Do I think they can get back together in a healthy way, yeah. As long as they each have grown. There’s so much there! But then it’s like, are you willing to truly commit to this person and make that choice again and again?

theGrio: Moving on to your other on-screen love on Queen Sugar, Blue played brilliantly by Ethan Hutchison. You were a child actor once, do you ever have advice for Ethan  or his parents?

Bianca Lawson: Ethan has wonderful parents who do an extraordinary job protecting him, looking out for him, and just being his container. You have to look at it as a marathon, not a sprint. Sometimes people trip up and get discouraged, but you have to keep going and figure out how to break out of it. It’s about the long game and doing it for the right reasons and having the right people around you. Ethan has all of that, I’m not worried about him at all.

theGrio: Your Black don’t crackness is pretty legendary. Can you let the Grio readers know what your secret to aging backwards is other than genetics or vampire blood?


Bianca Lawson: Ha! So funny. Everyone asks me that, but I don’t really have a great answer. But lowkey, I think stress is a big ager. I always ask myself “Do I want to be right or happy?” On principle you might want to fight something, but then is it worth your peace. Regrets also seem like an ager. So, I try to let go of things I have no control over. Keep it moving. People laugh when I say this, but I think love and affection help too. That’s it. I don’t really have a secret.

Bianca Lawson says to get some lovin’ and stop stressing and maybe you too can age backwards. Just kidding, but tune into to Queen Sugar on OWN every Wednesday at 9pm EST.