The triple homicide suspect ran circles around a police officer, choked a bystander, and was apprehended without a single gunshot wound. 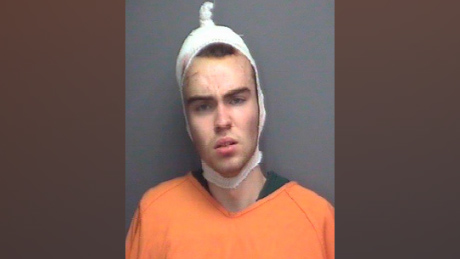 It’s one of the most bizarre videos to hit the internet, an 18-year-old man accused of murdering three family members, shows us what a double-standard in American policing looks like.

Matthew Thomas Bernard, of Keeling, VA, was arrested after police say he killed his mother, sister and sister’s child with a shotgun.  Bernard’s sister is the wife of Tampa Bay Rays baseball pitcher Blake Bivens.

But before Bernard would be taken by police, video from WSET shows him running around naked, running directly towards a police officer and charging him.  After the officer runs away from Bernard, he sprays the suspect with pepper spray.  The suspect the runs away and towards a church groundskeeper, who he begins to choke by the neck.

Bernard eventually lets him go after the police officer swats at him with a baton.  Watch for yourself as Bernard survives the encounter.

Suspect in Pittsylvania Co. triple homicide is in custody

EXCLUSIVE VIDEO: The suspect in a triple homicide in Pittsylvania County, 19-year-old Matthew Bernard, ran toward Kyle Wilcox WSET & Brion D. Humphrey while they were at a staging area — he also choked the church's caretaker.Bernard was taken into custody shortly after.https://bit.ly/2KWQFYy

The apprehension of white mass shooters and suspects has made national news, as critics wonder how they manage to be taken alive by law enforcement, while Black people accused of far-lesser crimes like selling cigarettes or reaching for an ID are often killed by police instantaneously.

He’s a murderer & will get to see his day in court.

There have always been 2 americas. https://t.co/5OZajnaBVX

Matthew Bernard just killed 3 people and strangle a 4th, CHASED a cop to assault her, did I mention he was butt naked? And THE COPS DID NOT KILL HIM.#WhitePrivilege

El Paso shooter, Patrick Crusius, surrendered to police after driving into an intersection after murdering 22 people at a Walmart.

A recent report says Black men are 2.5 times more likely to be killed by police than white men.

Still, there are numerous case of Black people suffering from mental health issues who die during police encounters.  In March of this year, police shot and killed 29-year-old Osaze Osagie, an autistic student at State College in Pennsylvania.  Osagie’s father had requested a mental health check on his son.  Police say the young man confronted them with a knife and use of force was justified.

Since his arrest, Matthew Bernard has put on suicide watch in jail. Police say he banged his head against the police cruiser while being arrested.

Bernard is being held without bail on three counts of first-degree murder.