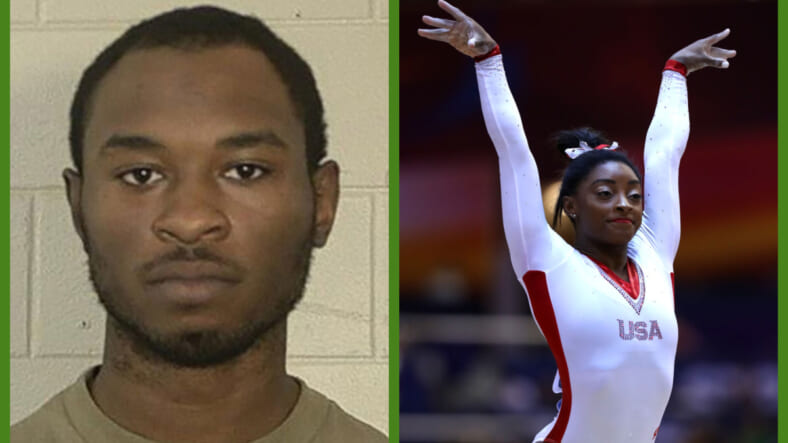 Tevin Biles-Thomas (Photo: Liberty County Sheriff's Office) is the brother of Olympic phenom Simone Biles (Photo by Francois Nel/Getty Images) and has been accused of a triple homicide.

Olympic gymnast Simone Biles recently took to Twitter just moments after her brother, Tevin Biles-Thomas, was arrested in connection to a triple-homicide in Ohio.

Biles-Thomas, 24, was arrested Thursday and charged with murder, voluntary manslaughter, felonious assault and perjury, according to a statement from Cleveland police. At the time of his arrest, Biles-Thomas was an active duty U.S. Army service member based in Fort Stewart, according to an official with the Liberty County Sheriff’s Office in Georgia.

Hours after his arrest, the 22-year-old gold-medalist and gymnast took to her official twitter to state: “Eating my feelings don’t talk to me.”

eating my feelings don’t talk to me

READ MORE: Simone Biles’ brother arrested for a triple murder at an Airbnb

While the tweet doesn’t directly address the incident, fans and followers assumed it was about her brother and responded with an outpouring of support and virtual hugs.

We love you Simone. I won’t talk to you since i can’t imagine what it’s like to be you, just sending a virtual hug ? pic.twitter.com/8NmaKGJS1c

Although Biles and her brother grew up in different households, the two still remained in contact, with the gymnast even once uploading a photo of her and her brother to her Twitter back in 2017.

my brother tevin | everyone says we look like twins but we don't see it pic.twitter.com/WnljD48rMQ

Due to her mother’s ongoing battle with drug and alcohol addiction, when the star athlete was just six years old, she was placed in foster care, along with her brother Tevin, and sisters Adria and Ashley, according to The Washington Post. Although born in Columbus, Ohio, Simone and Adria later moved to Texas to live with their grandfather, while Tevin and Ashley remained in Ohio, where they were raised by their great aunt in Cleveland.

Biles-Thomas is being investigated for an alleged shooting that took place at an AirBnB rental, during a New Year’s Eve party back on Dec. 31, 2018, where Delvante Johnson, 19, Toshaun Banks, 21, and Devaughn Gibson, 23, were killed when gunfire erupted.

Biles-Thomas is currently being held at Liberty County Jail in Hinesville, Georgia. According to court records, he is scheduled for an arraignment hearing in Cleveland on Sept. 13.