Are Jay-Z and the NFL bankrolling a non-profit that thinks cutting Black locs is progress?

OPINION: A non-profit that is getting funding form Roc Nation and the league seems to have espoused a tone-deaf message toward race, but do they realize what their messaging is saying? 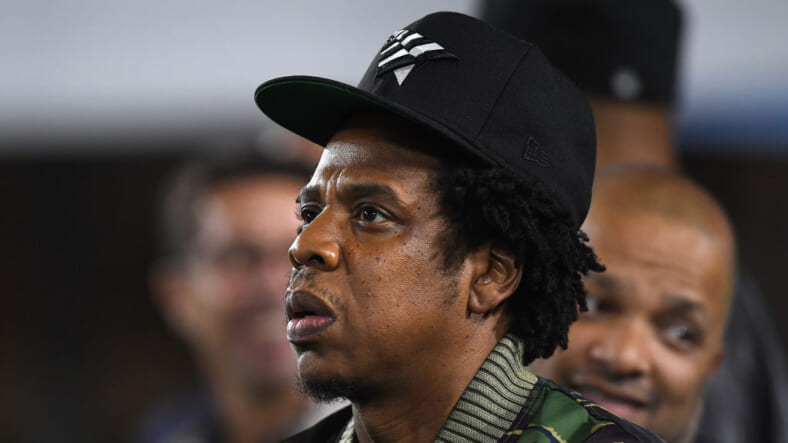 The internet has been ablaze in debate since it was announced that rapper Jay-Z would be partnering with the NFL and even more fuel has been added to that fire, due to claims that one of organizations benefitting from this partnership may be harboring anti-Black sentiments of the All Lives Matter variety.

According to the official press release, through his company ROC Nation, Hov will be co-producing the Super Bowl Halftime show and also contribute to Inspire Change, a foundation the NFL started in response to public outrage over their mishandling of free agent quarterback Colin Kaepernick’s protest.

But Thursday, disturbing photos started circulating on the internet showing a white woman gleefully cutting locs off of a Black boy’s head. In the original post, dated Oct. 25, 2016, Crusher Club President Sally Hazelgrove — who is the one wielding the scissors — says in her caption that the haircut is, “symbolic of change and their desire for a better life.”

Twitter account @RzstProgramming which is responsible for uncovering the old posts from social media profiles associated with the organization goes on the explain that the club likes to engage youth with fun activities and yet this appears to be, part of their “cop agenda” which includes, “encouraging young Black males to allow the director to cut off their dreads.”

So what does any of this have to do with Jay-Z?

Well, apparently, the Crushers Club is one of two groups working with at-risk youth in Chicago that is slated to receive part of $400,000 donation from Roc Nation and the NFL as part of their “Inspire Change” initiative, according to Sports Illustrated.

Put the scissors away Sally!

In addition to Hazelgrove’s racially charged assertion that cutting off dreadlocs will suddenly make the lives of Black children better, the organization also made several posts with the phrase “All Lives Matter,” and seems to also encourage young people to go into law enforcement.

While having more officers of color on the force isn’t necessarily a bad thing, (unless they’re anti-Black themselves), tweets that say things like, “They cant wait to arrest someone! Especially hearing they can start making 70k as a cop!” speak of a cultural tone deafness that is almost satirical.

Even though whoever runs the account for this group has been busy over the last 24 hours scrubbing every problematic and culturally insensitive quip off their page, unfortunately for them, screenshots are forever.

And after being dragged all up and through Al Gore’s internet, Friday, Hazelgrove issued a statement that denounces the claims that the Crushers Club discouraged Black young from having dreadlocks or any other ethnic styles.

“The Crusher’s Club does not have any policies prohibiting dreadlocks — we welcome all hairstyles from our youth. On occasion, our kids look to change their hairstyles and ask us to assist, especially since haircuts can be a costly expense for them,” she explains. “Our goal is — and will always be — to equip our youth with the resources to improve their neighborhoods, maximize their potential and develop into the leaders of tomorrow.”

While this is a nice cover story, most Black people who peeped the big creepy smile on ole Sally’s face as she not only gets permission to touch a Black person’s hair, but also gets to cut those nappy tresses off to boot (double win!) can peep exactly what’s going on here.

Today, the NFL’s #InspireChange “social justice” group is funding & visiting a non-profit that wants to cut off the locks of Chicago Black youth for “a better life.” https://t.co/JdvWliIEqv pic.twitter.com/GpPV0DqK2M

This is nothing more than respectability politics, wrapped up in that tired “I don’t see race,” rhetoric that so many whites love to spit out to keep any honest and uncomfortable examinations of their own biases at bay.

In fact, a concerned reader on Facebook reached out to the Crusher’s Club to explain, “There’s a rich cultural heritage associated with locs,” and also note, “Unfortunately, systemic racist systems seek to force compliance to white ideas of acceptable hairstyles.”

Rather than take in that feedback and use it to re-asses the tone of their messaging, whoever runs the organization’s page instead chose to dismiss the valid pushback with, “I don’t see race, children are children to me.”

In that statement lies everything wrong with this.

As hard as it may be for some to admit, you need to see race in order to properly address the myriad of things Black children have to face that their white counterparts don’t. You can’t truly help Black children if you won’t even acknowledge their Blackness, and the rich culture that is tied to it.

Jay Z needs to holla at his team

Now, I’m not naïve and recognize while Jay Z is the face of this NFL partnership there is a whole army of staff working on his behalf to keep this machine running. So he may not have hand picked this dumpster fire of a non profit himself.

However, heavy is the head that wears the crown and regardless of whose directly responsible for this oversight he’s ultimately going to be held accountable for how all of this is handled (or mishandled) especially given how much scrutiny he’s already under at the moment.

While many immediately gave the hip-hop mogul the side-eye for what they perceive to be a direct betrayal of both Kaepernick and the social justice movement as a whole, I was one of the more cautious voices in the crowd saying, “let’s see what they have planned first.”

But er uh… even I have to admit it’s waaaay too early to be messing up this badly.

Somebody over at Roc Nation needs to call a team meeting asapedly and find a way to swiftly get this group off their list and find someone else to give this money to. Otherwise the public may never truly trust their discernment or even the true intentions behind this partnership.

Let’s replace those images of a Trump supporter gleefully cutting a young black man’s locs to give him a “better life”… with the beauty and majesty of life with locs. If you adorn yourself with natural locs, share your pictures with the hashtag #loclife. I’ll start. xo pic.twitter.com/IAw0zjfwWN

While neither Jay, Z, Roc Nation or the NFL have responded to concerns about how the Crusher’s Club made it’s way onto their radar or their check books, Black celebrities and community leaders alike have already started chiming in with their attempts to take back the narrative.

“Let’s replace those images of a Trump supporter gleefully cutting a young black man’s locs to give him a “better life”… with the beauty and majesty of life with locs,” wrote director Ava DuVernay. “If you adorn yourself with natural locs, share your pictures with the hashtag #loclife. I’ll start.”

And as usual, somehow in the midst of all this mess, our community has been able to advocate for itself, with dozens of people sharing their gorgeous pictures of themselves in locs, living full and vibrant lives. But it’s a shame it still take all of that.

If this sloppy rollout is what the NFL has in store, whoo child!

Hov you in danger.