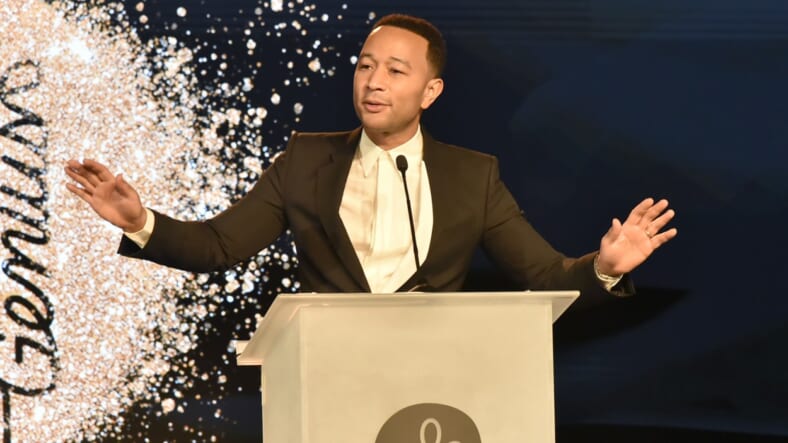 Singer John Legend was named “Sexiest Man Alive” by PEOPLE magazine earlier this week and before the ink could even dry on the EGOT winner’s magazine cover the internet was already clamoring to make hilarious memes that all ask the same question, “How did this happen?”

Now, granted, I know that an honor that usually celebrates the über macho likes of Idris Elba and Dwayne Johnson doesn’t seem like the lane that one would associate the gracious crooner with.

But…after my own initial wave of confusion, I found myself thinking of several reasons why the “All of Me” crooner is actually the exact sort of man that we should be celebrating to represent what “sexy” looks like in 2019.

Before y’all start rolling your eyes, hear me out. These are my top five.

Let’s be frank, we are experiencing an age of extreme tribalism right now where thanks to somebody’s president, bigots are feeling more emboldened than ever to perpetuate this idea of “Us vs. Them.”

The FBI has even released data that hate crimes and racially motivated homicides are at a record high since Trump was elected, with Black and brown bodies being the main targets.

In the midst of all that nastiness, there are voices like Legend who consistently go toe-to-toe with those who seek to oppress us, while also educating his community on how to identify (and eradicate) the anti-Blackness that they have unfortunately been spoon-fed as well.

Even though his delivery is admittedly more Martin than Malcolm, you gotta admit there’s something sexy about a brother who loves his people so wholeheartedly.

I sat down with Jamilah Lemieux and Cory Townes to talk about the state of racial bias in America, the impact of socially conscious music, and what "the look" really is. https://t.co/FB9FAwEcU7 pic.twitter.com/P8OqmCXiAr

Let’s be real here. Even the most committed John Legend critics have to admit that his choice of a mate is compelling as hell.

Chrissy Teigen is a beautiful, hilarious, incredibly unashamed woman who runs towards life with both hands and grabs it by the…. *cough* cojones. She is a robust modern-day social media heroine who takes no prisoners with her energy and wit.

There’s no way that an insecure man would last 10 months let alone more than a decade with a sister like that. For all of us girls out there who have always been told we had to be demure, shrinking violets in order to find love, there’s something so affirming about seeing how this gentleman loves his spitfire of a wife without a shred of resentment.

I suspect the reason why Legend doesn’t get the usual, “why isn’t he with a Black woman?” flack that most woke brothers in interracial relationships get is because even though Teigen isn’t Black, she’s universally our type of woman and has been incredibly unproblematic.

Love her or loathe her, sis is a real one. Period. The fact that he’s man enough to stand beside her makes him the truth too.

my secret is out. I have fulfilled my dream of having boned @people's sexiest man alive!! an honor!!!!! pic.twitter.com/xu7ygnhOZk

He stood up to R. Kelly

Now look, I’ve already waxed poetic about my thoughts on R. Kelly and his apologists for years in this column so I won’t bore you all with any more of that.

But I will say that the Surviving R. Kelly docu-series was one of those moments when we all had to sit up and admit that as chill as he may seem, when it comes to standing up for women or social justice in general, John Legend is “bout that life!”

“To everyone telling me how courageous I am for appearing in the doc, it didn’t feel risky at all. I believe these women and don’t give a f*ck about protecting a serial child rapist. Easy decision,” Legend tweeted back in January.

He consistently lands on the right side of history even when the rest of the internet is determined to be strong and wrong, and it hasn’t gone unnoticed.

*Taps mic* Ahem. "Sexy" is subjective. No doubt. But John Legend made "Baby It's Cold Outside" less rapey. And he appeared in Surviving R. Kelly. That's pretty sexy to me.#LateTweet #SexiestManAlive pic.twitter.com/SEoOehMmy2

At this point, you would have to flat out lie to deny Legend’s talent. In fact, the singer is one of the few people on the planet who can boast that they’ve pulled off an EGOT (Emmy, Grammy, Oscar, Tony).

Most creatives in the industry can only dream of achieving such a feat. In fact, eons ago during the first half of her career, Beyonce once admitted that one of her ultimate dreams is to be an EGOT winner, one of the few goals of her career that still alludes her.

So far only 15 people have ever been able to pull this off.

As Teigen shamelessly pointed out, her beloved is the only EGOT winner to also pull off being crowned People’s Sexiest on top of that. As a result, the hashtag #EGOTPSMA has even started trending on Twitter.

He’s in on the joke

Last but certainly not least is — Legend is in on the joke.

Because while he surely has a healthy ego (it would be physically impossible not to have one in an industry that would eat you up otherwise), he also has an incredibly sharp sense of humor.

He knows some of y’all think he’s corny. He knows nice guys like him usually don’t get cast as heartthrobs and he’s even aware that he looks nothing like his predecessor Idris Elba; a fact that social media users still insist on reminding him of incessantly.

1995 John would be very perplexed to be following 2018 @IdrisElba as #SexiestManAlive. Hell, 2019 John is about as equally perplexed but thank you @People for finding me sexy. I'll take it ? pic.twitter.com/Gw1la5Ebv4

Do you know how much confidence it takes to get dragged simply for being called sexy and still keep your head up? Had this man not been as well adjusted as he is, this pseudo-backlash and constant critique could have been incredibly hurtful and even damaging.

For years traditionalists have been complaining that the public outcry against “toxic masculinity” was just going to breed a generation of “soft” men who can’t take a joke.

Welp, this week our boy John just proved all of y’all wrong.

While far from the traditional “manly man” archetype, John Legend’s masculinity is neither toxic or fragile. He’s laughing along with us, while still going home to his brilliant wife, gorgeous children, and a career that most could only dream of catching a glimpse of — from a distance.

The fact that he’s not stunting on you heauxs or pulling out receipts to shut this mockery down just goes to show how secure he is. And that is actually sexy as hell.

Suddenly, I get it. Well played PEOPLE.