Pinterest and The Knot will change how they promote plantation weddings 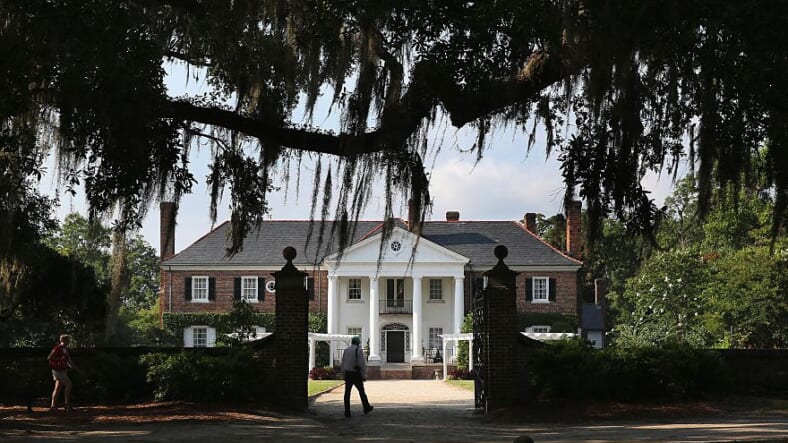 MT PLEASANT, SC - JULY 16: People walk through the grounds of the Boone Hill Slave Plantation, founded in 1681, is one of the oldest working plantations in the United States, once producing cotton and pecans but now fruits and vegetables. The plantation is a popular tourist destination, where visitors can tour the main house, the extensive grounds and the former slave quarters. (Photo by John Moore/Getty Images)

UPDATE: As a result of this article, theGrio received a statement on behalf of Zola regarding their new policy. Below is the statement they provided:

“We re-evaluated all our venues listed on Zola and determined we will not allow vendors to list who are plantations. We recognize that this is a painful issue and have been evaluating on an ongoing basis. We appreciate Color of Change for bringing this issue forward and will work with them and additional organizations to ensure our policies and guidelines are inclusive and make everyone feel welcome.”

We’re glad to see that systematic changes have been made. –The Editors

Two well-liked wedding sites have agreed to change their policies around how they market former slave plantations after they were contacted and urged to do so by Color of Change, a national civil rights organization that shines a light on injustices and challenges discriminatory people, organizations and practices.

The Knot Worldwide, which owns The Knot and Wedding Wire, and Pinterest have agreed to stop promoting former slave plantations as romantic wedding sites and/or to alter the romanticized language that these venues are allowed to use on their web sites to try and attract couples, according to BuzzFeed.

“Weddings should be a symbol of love and unity. Plantations represent none of those things,” a spokesperson from Pinterest emailed to BuzzFeed. “We are working to limit the distribution of this content and accounts across our platform, and continue to not accept advertisements for them.”

Pinterest added in its email to NBC News that they are “grateful to Color of Change for bringing attention to this disrespectful practice.”

Pinterest says it will revise its policies to now restrict former plantation wedding content on its website and will also turn off search recommendations to these sites. Users will still be able to hop on Google and look at former slave plantation venues on Pinterest, however, those searches will soon be accompanied by an advisory warning that some content may violate Pinterest’s policies. Pinterest also vowed to no longer run advertisements on plantation search results so it will no longer make money from these venues.

Although The Knot will still allow former slave plantations to advertise on its sites as wedding venues, it will alter the flowery adjectives these venues can use. The Knot is working with Color of Change on its updates, but said its new language rules would also apply to all wedding venues advertising on its sites and not just former slave plantations to try and thwart any effort from former plantations to change its branding to something altogether different, like a manor, according to NBC News.

“Color of Change brought an issue to light about the way venues with a history of slavery describe their properties to couples. We’re currently working with Color of Change to create additions to our current content guidelines that will ensure all couples feel welcomed and respected on our sites,” according to a statement The Knot released to NBC News.

Arisha Hatch, vice president at Color Of Change, said the civil rights organization is attempting to draw attention to “all the different ways that the wedding industry is disrespecting Black folks by romanticizing forced labor camps that brutalized millions of slaves.” One way the organization is doing this is to show that this sort of thing would never be allowed to occur at former concentration camps.

“If we were talking about concentration camps, it would be weird and disrespectful and egregious for folks to be seeking to have their weddings at these locations,” Hatch said in an email to theGrio.

Color of Change also reached out to Martha Stewart Weddings, Brides magazine, and Zola, but the organization said so far Pinterest and The Knot are the only two that have responded.

Might be time to see if their advertisers will respond.