The truth is that opioid addiction is hitting Black urban centers in the same fashion that it is hitting white rural ones but the opioid narrative has led us to believe otherwise. 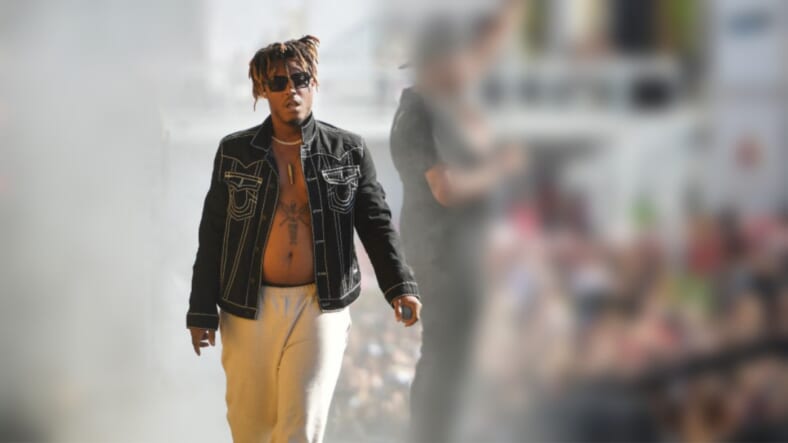 Juice Wrld is at the center of the debate between white and Black people who are victims of the opioid crisis. (Photo by Matt Winkelmeyer/Getty Images for iHeartMedia)

The opioid crisis isn’t a white problem. It is a problem that has been given a white face and many of us fell for it. In the wake of Juice WRLD’s death less than a week ago, there needs to be a conversation about Black opioid addiction because we’ve already ignored it for far too long.

As I watch the commentary on the end of this blossoming 21-year-old rapper, two thoughts come to mind. We failed him and others like him by treating a global health crisis as simply “white people shit.” And, for those of us who have watched hip-hop culture in its entirety first-hand, we have conveniently ignored the history that makes a Juice WRLD possible.

“It’s wild because I even have insight into how the white community must’ve felt watching the Black community go through the scourge of Crack… because I don’t care either. ‘Hang in there, whites. Just say no! What’s so hard about that?’” —Dave Chapelle, Sticks and Stones

I don’t agree with Dave Chappelle on much but the opioid epidemic annoyed the shit out of me having watched the crack epidemic first hand. The criminalization of what was a health crisis stings, even more, when you see the compassion and mobilization for drug-addicted whites.

Juice WRLD’s death is more emblematic of the Black portion of the opioid crisis than many of us recognize or care to admit and the numbers are there to prove this.

In 2017, Blacks accounted for 12 percent of overdose deaths related to opioids. While that is far less than the 78 percent of white deaths, it is still a very significant number.

This becomes more disturbing when you consider that Blacks are only half as likely to be prescribed pain medication than whites because opioid addiction commonly begins with legally prescribed drugs. Worse still, Blacks with opioid addictions are 35 times less likely to get the treatment they need.

We are literally being ignored from the beginning to the end.

The largely white face of the opioid crisis has served not only to create a means for Blacks to be ignored in the fight for adequate treatment but has also resulted in us not recognizing that we need those services in the first place. The truth is that opioid addiction is hitting Black urban centers in the same fashion that it is hitting white rural ones but the opioid narrative has led us to believe otherwise.

As far as the hip hop community is concerned, to paraphrase Jay-Z, old ni**as need to stop acting brand new. Drug addiction, opioids, in particular, have had their place in the hip hop community since its inception. And this includes lean which has been the poor man’s heroin since the 1960s. That’s right, there’s nothing new about the sweet concoction of prescription-strength cough medicine mixed with soda and candy. Even now middle-aged Blacks account for the greatest increase in opioid overdose deaths with the vast majority being linked to fentanyl. We aren’t simply watching a trend in hip hop; we created it.

Juice WRLD had struggled with addiction since the sixth grade. In an interview with Billboard Magazine earlier this year, he explained how upon meeting his favorite rapper Future how the “Mask Off” rapper inspired him to try lean saying, “Oh, yeah. I think I broke his heart a little bit.”

At 42 years old, I won’t pretend to have been a fan of his music, or to be even more honest, ever heard of his work beyond one song. But, to deny seeing the nearly 50-year arc from “White Lines” to “Sippin On Some Syrup” to “I Feel Like Dying” and culminating with “WRLD On Drugs” would be a complete and utter lie.

Juice WRLD’s life was a complicated one. Too complicated to be distilled in a few hundred words. He was a talented yet troubled musician plagued by bad choices and addiction. And yes those are two separate things. If we are going to begin to treat addiction like the health crisis that it is then it is time for all of us to get off of your collective moral high horses. Addiction isn’t a sin, but maybe watching and enjoying the entertainment derived from it should be.

We have grown accustomed to watching slow death play out for our enjoyment. Before her passing, I remember asking whether or not Amy Winehouse would live long enough to produce another album. At that moment I acknowledged that her death was inevitable while selfishly clamoring for more of her music. In a similar fashion, nothing about Juice WRLD’s life leads us to believe he was meant to be in this world for very long but we seem satisfied with letting the band play on.

For the old heads, Juice WRLD is easy to write off. He was young, he looked weird, quickly rich and famous, and even slightly androgynous. He rapped about being heartbroken in a way our generation never could. And yet, to deny our connection to Juice WRLD is to deny that he was ever our son and how we all failed to look after him.

Shane Paul Neil is a writer, podcast producer, and editor from The Bronx. He has covered tech, pop culture, and current events.