OPINION: The Democratic Party seems to want Black votes, but discouraged by the making of another Black president

Exactly what are they doing to help the cause? 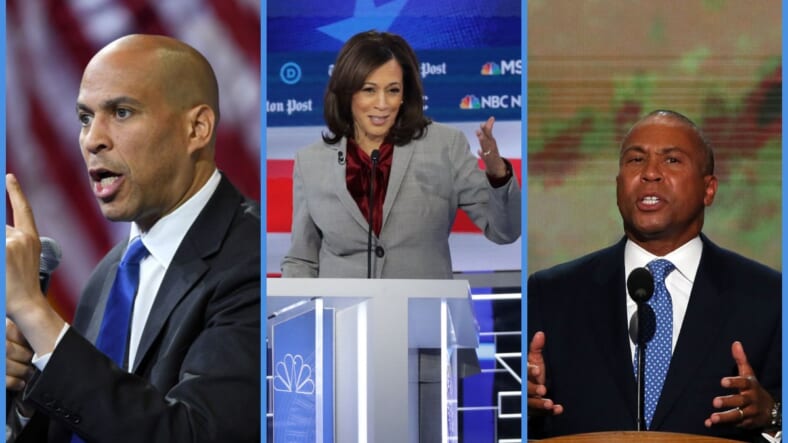 As the three Black Democratic candidates for the presidency, Sen Cory Booker, Sen. Kamala Harris, Deval Patrick, seem to be stuck on pause or completely out, what exactly is the Democratic Party doing to help move things along for those still in the fight? (Photos courtesy of Getty Images)

Democratic Senator and Presidential candidate Cory Booker recently announced that he will not make an appearance on stage during this week’s Democratic nomination debate at Loyola Marymount University in Los Angeles on Dec. 19. Booker didn’t raise the required funds needed to qualify. Sen. Kamala Harris was forced to step down from her campaign a few weeks ago because she couldn’t financially sustain her efforts while former Governor Deval Patrick literally seems like a pinch hitter who just showed up to play ball.

As the two Black Democratic candidates for the presidency seem to be stuck on pause and one is now completely out of the race, what exactly is the Democratic Party doing to help move things along for our people?

The Democratic Party cannot claim to represent the interests of Black voters if there are no Black candidates. Not a single vote has been cast, and yet the self-professed party of diversity and inclusion has emerged with the very real prospect of an all-white, top-tier roster headed into the primary season. This is going to be an embarrassment to Democrats who have got to change their ways lest they are accused, yet again, of taking the base for granted.

The premature departure of Harris from the Democratic presidential primary field raises some issues. When she entered the race, she was touted as a former San Francisco prosecutor, the former California state attorney general, and one shrewd politician. She was attracting that Hillary Clinton money.

As a senator, Harris has established her by serving up mediocre white men such as Jefferson Beauregard Sessions—who lives up to his name—during his nomination hearing for U.S. attorney general.

Let’s be honest, Harris made her share of mistakes. For example, she could not decide if she wanted to be a moderate or a progressive, while also promoting a hawkish Clintonesque foreign policy and embracing Israeli apartheid and the likes of Prime Minister Benjamin Netanyahu, who once referred to African migrants and refugees as “illegal infiltrators” who threatened the existence of his country. Further, Senator Harris took a hit for her record as a “tough on crime” prosecutor and allegations that her policies hurt Black people.

Being Black Is Not Enough

While no one has a right to the nomination, white candidates apparently have more of a right than others, highlighting the need for Democrats to change their selection process. Now, Black candidates must own their record, including accomplishments and victories, blemishes and discrepancies, and not expect Black allegiance just because. In the post-Obama era, being Black is not enough to gain support, and it is misplaced to assume that a particular candidate is best for Black America simply because of skin solidarity.

However, while presidential hopefuls such as Harris are barred from making mistakes and evolving, white politicians like Mayor Pete Buttigieg are allowed to fail up.

Although the honeymoon might soon be over for the mayor of South Bend, Indiana, white male competitors are also the beneficiaries of biased media coverage that have put Booker, Patrick, Julian Castro, and Andrew Yang at a disadvantage, hard-pressed to make it out the gate.

Praised for his Harvard pedigree and the bragging rights of being a Rhodes scholar who is fluent in several foreign languages, Mayor Pete is not the only person in the race with those attributes. After all, Booker was a Rhodes Scholar, Castro attended Harvard Law School and Sen. Elizabeth Warren was a law professor at Harvard, for all it’s worth.

READ MORE:Cory Booker responds to Mike Bloomberg’s “well-spoken” comments, assures there is “no beef” between friends

Meanwhile, while former Vice President Joe Biden leads among African-American voters, according to most polls, we have to ask whether skewed media coverage from white-dominated newsrooms and the Beltway chatter class are at fault for creating a self-fulfilling prophecy favoring a moderate Great White Hope.

In the Democratic Party and the so-called mainstream media, the narrative that in order to win in 2020 or any election, Democrats must appeal to white working-class voters who lack a college education. If the Dems hope to position themselves as the party of white people against the white nationalist Republicans, they will always lose. They cannot focus on courting Trump voters rather than solidifying and prioritizing their own base of Black and Brown voters and courting nonvoters. It’s simply a fool’s errand.

And the role of money in politics doesn’t help. However compelling their messages may be, those running for office cannot succeed without money, and lots of it, in a prohibitively long election season Ours is a political system that allows the unlimited corrupting influence of dollars as the equivalent of free speech.

Oligarchs in both parties put their thumbs on the scales and control the policy discussion by purchasing the laws and the candidates. Consider the vanity project of late entrant former mayor of New York City, Mike Bloomberg, who has been accused of attempting to steal the election and substituting door-to-door campaigning by writing checks.

Bloomberg, like Buttigieg, cannot hope to win the Democratic nomination without Black votes, which will be difficult due to a problematic policing record during their respective tenures as mayor. In Bloomberg’s case, the targeting of Black and Latino men using stop and frisk. Yet, Bloomberg is discussed as a viable candidate because he possesses the right color scheme: white and green.

Meanwhile, Black people, the base of the party, seem to be getting the short end of the stick, as politicians ignore our concerns which go beyond visiting a Black church and clapping offbeat to the choir, right before Election Day.

The needs and concerns of Black voters are serious and require more than window dressing, lip service and platitudes from the Democratic Party or anyone else. In a nation of systemic institutional racism and rising inequality, the racial wealth gap is widening, Black America experienced a historic loss of Black wealth from the Great Recession and the racially discriminatory practices of the predatory mortgage lenders. And for all the good he accomplished, remember that Obama bailed out Wall Street, not Black homeowners.

Well into the 21st century, we are still hunted like game, similar to the animals Trump Jr. kills as trophies in Africa and Asia. We are treated like lab rats and test animals given poisoned water and air and directly exposed to the impact of climate change. Our children are punished for their hair, and Black girls are suspended at double the rate of their white counterparts because of racial stereotypes. Meanwhile, Black people built this country. While it is encouraging that many Democratic presidential candidates to support reparations when actualized, how will they react to the price tag?

The Democratic Party must change its way of doing primaries. A party that wants Black votes but discourages the making of Black presidents, makes for bad optics and even worse, bad politics.