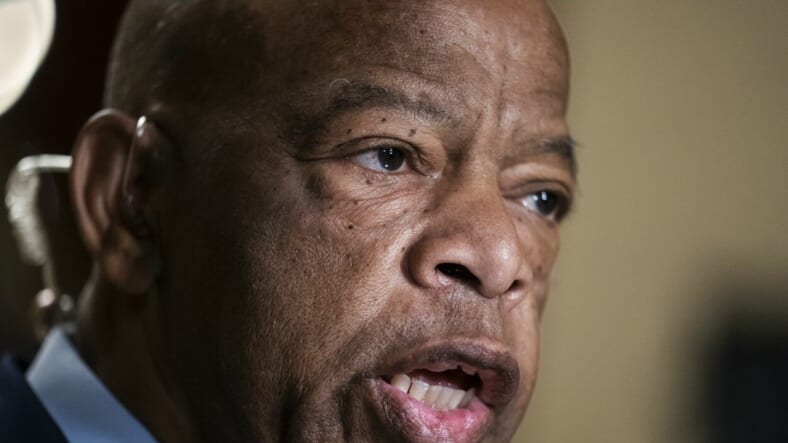 The country on Sunday felt a collective weight after the announcement that civil rights icon Rep. John Lewis of Georgia was battling stage 4 pancreatic cancer — news that prompted political figures and celebrities to express their emotions on social media.

The outpouring of support came from a parade of people, from former President Barack Obama to celebrated filmmaker Ava DuVernay, and echoed the feelings of the country about a man who has been called a national treasure.

Lewis, a longtime U.S. Congress member representing Atlanta and a longtime member of the Democratic Congressional leadership, is the last surviving organizer of the 1963 March on Washington. He was a disciple of the late Martin Luther King Jr. and one of the Freedom Riders, who bussed through the South to win voting rights for Black Americans.

If there’s one thing I love about @RepJohnLewis, it’s his incomparable will to fight. I know he’s got a lot more of that left in him. Praying for you, my friend.

Dear Congressman.
You are loved.
You are respected.
You are magnificent.
Lifting you up in prayer, peace and the power of your ancestors this day.
May God continue to bless you in all the ways you’ve blessed us, sir.#GoodTrouble pic.twitter.com/vF0S9JN3pD

DuVernay directed the 2014 film Selma that depicted the 1965 Selma to Montgomery marches led by Lewis, King, James Bevel and Hosea Williams. In her tweet, she posted photos of her, Lewis and others involved in the cast. In one photo, she and actor David Oyelowo are kissing Lewis on each side of his face as the congressman breaks up.

A host of others showed their support for the congressman on social media, pledging their prayers and support for him.

Tweeted former President Bill Clinton, “If there’s anyone with the strength and courage to fight this, it’s you, John. Hillary and I love you, and we join with millions of other Americans in praying for you and your family.”

READ MORE: Democrats are vying for the coveted support and endorsement of Rep. John Lewis

Stacey Abrams, former candidate for Georgia governor, tweeted, “Rep. John Lewis is America’s conscience and Georgia’s heart. We stand with him as he fights one more battle – to defeat pancreatic cancer. As he wages that war, he continues to do the people’s work, buoyed by the prayers and good will of millions. God bless you, my friend.”

Atlanta Mayor Keisha Lance Bottoms held up Lewis as a “national treasure” in a statement released to Twitter, and hailed him for spending his “entire life on the front lines of the fight for equality.”

She tweeted, “As he now takes on his next fight, as a community of faith, we stand in agreement with him, believing that God is still on the throne, and that healing and restoration are on the horizon.”

Tweeted Bernice King, CEO of The King Center in Atlanta and daughter of the late Martin Luther King, “I am praying for him and encouraged by the knowledge that he is a legendary fighter. Fight on, sir.”

Lewis’ longtime colleague in the Democratic leadership in Congress – House Speaker Nancy Pelosi of California – tweeted out a photo of herself with the congressman at a former slave fort in Ghana, on a trip in which a delegation of lawmakers visited the nation.

.@RepJohnLewis, we are all praying for you following this diagnosis. John, know that generations of Americans have you in their thoughts & prayers as you face this fight. We are all praying that you are comfortable. We know that you will be well. pic.twitter.com/j7YMUGLPC2

In announcing the news via a statement on Sunday, Lewis said, “I have been in some kind of fight — for freedom, equality, basic human rights — for nearly my entire life. I have never faced a fight quite like the one I have now.”

The congressman said he will return to Washington in the coming days and continue to work while undergoing treatment.