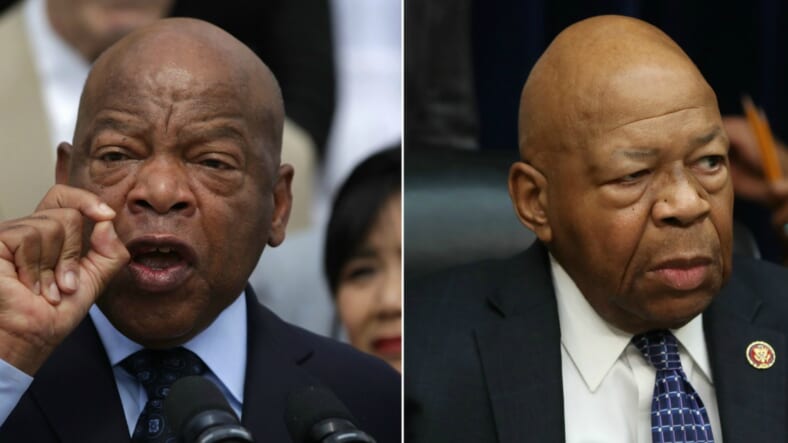 CBS News admitted Tuesday that it made what seems to be a common media mistake: reporters and producers confusing Rep. John Lewis and the late Rep. Elijah Cummings.

About an hour after airing a report on the health of Lewis, the civil rights icon and Georgia congressman, who revealed that he is battling stage IV pancreatic cancer, using a photo of Cummings, the Maryland congressman who died in October at age 68. CBS issued an apology for the mistake saying:  “We deeply regret the error,’’ the apology statement read, in part.

The hour in between broadcasting the mistake on the CBS Evening News and making their apologies, social media roasted the network nonstop, spreading the error far and wide.

Both Lewis and Cummings are legendary for their work in the area of civil rights and both men have played significant roles in progressive politics for more than half a century. While both are African American men from the Civil Rights generation (and do bear a similar physical appearance), they represent different districts and have served different purposes in Congress. Lewis chairs the Oversight subcommittee of the House Ways and Means Committee. Cummings was chair of the House Oversight Committee.

CBS is at least the second network this year to mix Cummings and Lewis up.

Back in June, Fox News aired a clip of Lewis in a committee hearing — with his nameplate in the camera shot — and identified him as Cummings. The network was criticized apologized soon after. Also, in 2017, CNN tweeted out a link to an interview with Cummings using Lewis’ picture.

Several social media posts surfaced with either condolences about the passing of Lewis, or condolences for Cummings with photos of Lewis, or both. For a while the day of Cummings’ passing, John Lewis was trending on Twitter, enraging many.

Confusing Black people in the media is not a new phenomenon, as singer Patti LaBelle discovered last year after Aretha Franklin died and this surfaced on, again, Fox News. And also as Angela Bassett and Omarosa found out after an item from last year’s Emmy Awards was published in The New York Times.