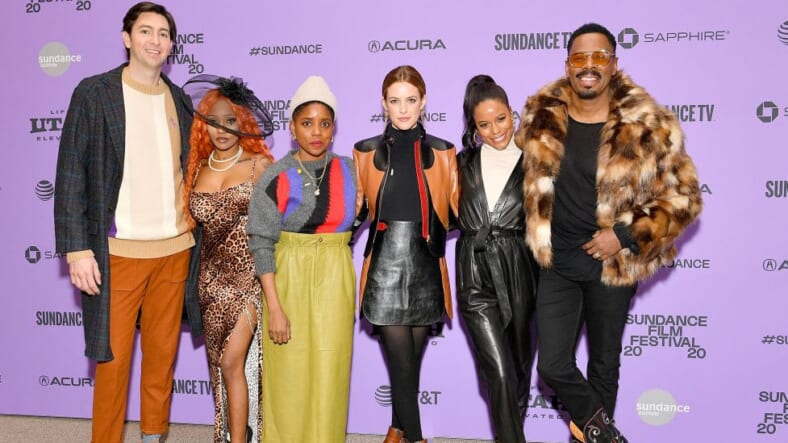 “Y’all wanna hear a story about why me & this bitch here fell out? It’s kind of long but full of suspense.”

Thus began the odyssey of one A’Ziah King, aka Zola. From acclaimed writer/director Janicza Bravo, Zola’s stranger than fiction saga, which she first told in a now-iconic series of viral, uproarious tweets, comes to dazzling cinematic life.

On October 27, 2015, enthralling readers with a whopper of a tale that quickly went viral with its raw, rollicking, and raunchy account of female friends on a trip to Tampa gone awry. The 144-tweet thread known as #TheStory began— fittingly—in a Detroit Hooters, where then-20-year-old A’Ziah “Zola” King was working as a waitress when her life changed dramatically following a chance encounter with a customer known as Jessica.

Zola Tells All: The Real Story Behind the Greatest Stripper Saga Ever Tweeted

In the film, Zola (Taylour Paige), a Detroit waitress, strikes up a new friendship with a customer, Stefani (Riley Keough), who seduces her to join a weekend of dancing and partying in Florida. What at first seems like a glamorous trip full of “hoeism” rapidly transforms into a 48-hour journey involving a nameless pimp, an idiot boyfriend, some Tampa gangsters, and other unexpected adventures in this wild, see-it-to-believe-it tale.

The highly-anticipated film premiered at the 2020 Sundance Film Festival to raucous applause four years after the Twitter thread went viral. The film’s director, Janicza Bravo (Lemon) infused her unique vision into the project and managed to make it feel just as entertaining as the original tweets while highlighting the more sinister parts of the story. Let’s be clear: there’s nothing funny about realizing just how degrading sex work can be, and Bravo walks the line between comic relief and intensely realistic scenes.

“Humor, in general, is something that everybody can relate to — we can heal through laughter,” says King. “I tried to intertwine a serious topic with a sense of humor, and it became relatable to people even if they thought something like this only happens in movies, or could never happen to them. The humor made them want to dig deeper into the story, and they realized it’s something that could happen in their backyard — I was their waitress. I was the girl they walked past in the grocery store or hotel lobby.”

The casting couldn’t have been better. Taylour Paige proves she can carry a film on her back and shows off some skills that make stripping look like it should be an Olympic event. Riley Keough is flawless as the obnoxious, deceitful prostitute with a mean blaccent and  Colman Domingo is spot-on in his portrayal of an undercover pimp. Nicholas Braun (Succession) is hilarious as a gullible moron and the chemistry between the cast is palpable.

The film also features Jason Mitchell in a pretty prominent role, but the actor who has been the subject of sexual misconduct allegations was noticeably absent from the film’s premiere and production notes. Still, his performance strengthens the film and is worth noting.

WATCH: Jason Mitchell denies sexual misconduct and opens up about being fired from ‘The Chi’

The Sundance Film Festival is still in full effect but the film ‘s international distribution rights have already been purchased by Sony Pictures Worldwide Acquisitions (SPWA). According to Deadline, the SPWA will distribute the film in all territories except North America, China and Japan. VVS films has also acquired distribution rights in Canada. A24 is planning a summer release of the film.