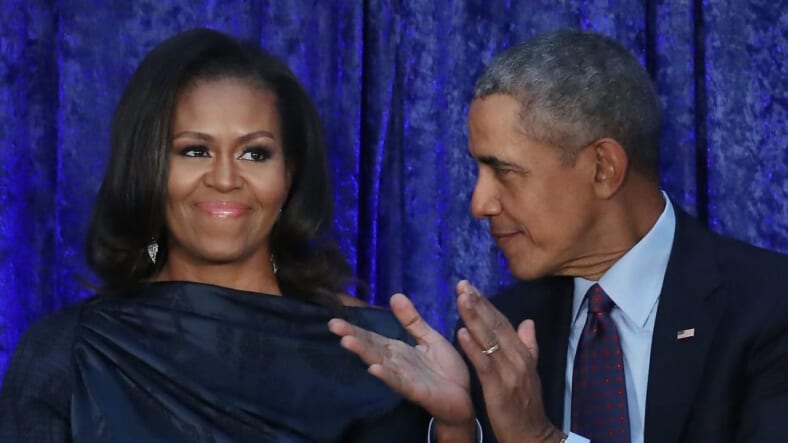 Former U.S. President Barack Obama and first lady Michelle Obama participate in the unveiling of their official portraits during a ceremony at the Smithsonian’s National Portrait Gallery, on February 12, 2018 in Washington, DC. The portraits were commissioned by the Gallery, for Kehinde Wiley to create President Obama’s portrait, and Amy Sherald that of Michelle Obama. (Photo by Mark Wilson/Getty Images)

American Factory took home the Academy Award in the category of “Best Documentary Feature” on Sunday night, besting The Edge of Democracy and For Sama. In American Factory, filmmakers Steven Bognar, Julia Eichert and Jeff Eichert followed the story of an Ohio factory that was reopened by a Chinese billionaire inside of an abandoned General Motors plant.

While accepting the award, Bognar and the Eicherts thanked the Obamas’ production company, Higher Ground, for allowing the important story to be told, according to The Hill.

The documentary, which streamed on Netflix, marked the Obamas’ first film project from their Higher Ground production company. The Obamas signed a multi-year contract deal with Netflix in 2018 to produce several films.

American Factory “focuses on post-industrial Ohio, where a Chinese billionaire opens a new factory in the husk of an abandoned General Motors plant, hiring 2,000 blue-collar Americans. Early days of hope and optimism give way to setbacks as high-tech China clashes with working-class America,” according to the film description, which adds: “The filmmakers capture every key moment in this high-stakes intercultural chess game, revealing how American and Chinese workers view themselves within systems of authority. It’s a collision of the future of American labor and Chinese economic dominance, all within the confines of a factory in Ohio.”

READ MORE: Our list of Black folks and films that should have been nominated for Oscars

Filmmakers were given permission to go behind the scenes at the company, Fuyao. In the film, Cao Dewang, founder and chairman, complained about the American workers saying “American workers are not efficient. Output is low, I can’t manage them.”

After the film won the Oscar, Barack Obama took to Twitter to congratulate the team.

“Congrats to Julia and Steven, the filmmakers behind American Factory, for telling such a complex, moving story about the very human consequences of wrenching economic change. Glad to see two talented and downright good people take home the Oscar for Higher Ground’s first release,” Obama tweeted.

Others tweeted their awe and love of the 44th president.

“If there was an Oscar for favorite president … you’d win. p.s. you are truly missed,” Angela Belcamino tweeted to Obama.