In 2016, President Trump praised the controversial policy of stopping Black and Brown men 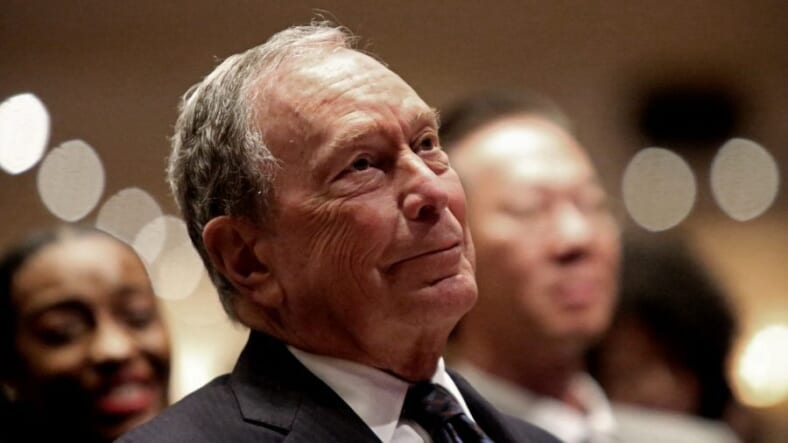 Trump’s tweet included a viral video of Bloomberg speaking at the Aspen Institute five years ago on his troublesome “stop-and-frisk” police policy, which he pursued vigorously while mayor of New York. In the video, Bloomberg tells the audience that the reason police target minority communities is because “that’s where all the crime is.”

“95% of your murders – murderers and murder victims – fit one MO,” Bloomberg says, according to The Guardian. “You can just take the description, Xerox it and pass it out to all the cops. They are male, minorities, 16 to 25. That’s true in New York, that’s true in virtually every city.”

Bloomberg has since apologized for the policy. At a Black church in Brooklyn last November, Bloomberg said he missed the mark and is sorry.

“I can’t change history,” he told congregants. “However today, I want you to know that I realize back then I was wrong.”

“The fact is, far too many innocent people were being stopped while we tried to do that. The overwhelming majority of them were black and Latino,” Bloomberg added. “That may have included, I’m sorry to say, some of you here today. Perhaps yourself or your children, or your grandchildren, or your neighbors, or your relatives.”

What Trump’s tweet failed to acknowledge is that Trump still supports stop-and-frisk, according to CNN Political Correspondent Abby D. Phillip.

“Trump calling Bloomberg racist for describing a policy he supports **to this day** is very 2020,” tweeted.

Trump calling Bloomberg racist for describing a policy he supports **to this day** is very 2020.

In another post, Phillip adds: “There’s just one little problem with this… Donald J. Trump in 2016: “I would do stop-and-frisk. I think you have to. We did it in New York, it worked incredibly well and you have to be proactive and, you know, you really help people sort of change their mind automatically,” Phillip tweeted.

There’s just one little problem with this…

Donald J. Trump in 2016: “I would do stop-and-frisk. I think you have to. We did it in New York, it worked incredibly well and you have to be proactive and, you know, you really help people sort of change their mind automatically,” https://t.co/gVl6iz8vXA

“Says the guy who locks up families at the border who are seeking asylum to escape atrocities in their home nation. While Bloomberg has promoted & initiated terrible stop & frisk policies, he’s renounced their use. We’ll see how the public decides to respond to his new views,” tweeted Tracy Corrigan in response to Trump’s tweet.

Bloomberg is reportedly worth $60 billion. He is self-funding his presidential campaign and opting out of the early Democratic primaries. Recently, his poll numbers show signs of improving, particularly with Black voters, according to The Guardian.

Trump appears to have taken notice. But calling Bloomberg racist is an interesting approach for Trump considering his own record – from personal attacks on late Congressman Elijah Cummings’ district in Baltimore to a race discrimination lawsuit lobbed at him as a property developer in New York.

The former mayor of New York responded to Trump and the controversy in a series of tweets later in the day. Bloomberg claimed to have inherited the “stop and frisk” policy and that he had apologized for his actions. He further declared that Trump was attempting to divide Americans.

Trump’s deleted tweet is the latest example of his endless efforts to divide Americans. The President’s attack clearly reflects his fear over the growing strength of our campaign. https://t.co/nj2hBJcQP6