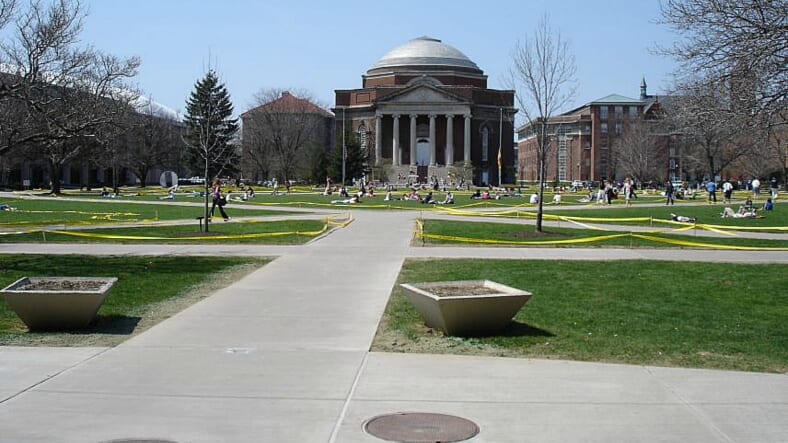 Syracuse University has suspended roughly 30 students for protesting white supremacy hate crimes that students say have not been properly dealt with by school officials.

The students, from the group #NotAgainsSU, staged an “occupation” Monday night inside of Crouse-Hinds Hall, an administrative building where Chancellor Kent Syverud’s offices are located. The students, who have called for Syverud’s resignation, live-streamed the protest on social media and also posted the suspension letters they received, according to Syracuse University News.

A look at the crowd by Crouse-Hinds hall, as #NotAgainSU protestors on the inside ask those outside to come to the window. @CitrusTVNews pic.twitter.com/K5XlhVLihE

This is bad, real bad y’all.

Syracuse University just handed our suspension notices to students staging a sit in.

In the live-stream video, students held conversations with college administrators who told them they needed to comply with campus rules and cited the “Disruption Policy” which prohibits students from being in Crouse-Hinds Hall after hours. At first, administrators issued warning letters, giving students until 9 p.m. to vacate the building or face a violation of student code. The interim suspensions were issued to about 30 students who remained after 9 p.m., the school news site reported.

The suspension allows students who live on campus to only be allowed in their dormitories and dining halls, but not in any other Syracuse University-owned property. Any student found in violation of this could be arrested for trespass, according to the letters.

This stand-off between students and Syracuse University officials began last year and has escalated in recent months. Students started the #NotAgainSU group in response to multiple racist and anti-Semitic incidents on campus and in the greater community.

Not pleased with the university’s response to those incidents, students from the group protested in November during an eight-day sit-in and school leaders gave them immunity from certain campus rules at that time. Last year, the group also sent to Syverud a list of demands, which he ultimately signed in an edited draft.

The students continued to protest and have added to their list of demands. In addition to calling for the resignations of Syverud and other school leaders, protesters have asked SU to publicly identify any perpetrators from the hate-crime incidents, disarm public safety officers, freeze tuition, acknowledge the school has systemic race and anti-Semitic issues on campus, and change the housing selection process for people with disabilities, according to Syracuse University News.

However, this time school administrators are so far refusing to acquiesce.

Keith Alford, Syracuse University’s chief diversity and inclusion officer, and Robert Hradsky, the school’s vice president for the student experience, jointly sent out a campus-wide email telling students they could protest at Bird Library, which is open 24 hours a day. Both Alford and Hradsky said in the letter that they aren’t against protest, but need students to follow campus rules.

“Though we continue to support peaceful demonstration and the free and respectful exchange of ideas, at this time, we must enforce established policies that help maintain an environment that fosters sensitivity, understanding and respect for all 22,000 students in our community, as well as our faculty, staff and visitors,” Alford and Hradsky said in the email.

After the suspensions, students continued their protest on Twitter.

The Dissertating D*ke tweeted some halting Syracuse University stats. She tweeted that more than 20 white supremacy hate crimes had occurred at the university, for which no students were arrested. Instead, she wrote, the university chooses to penalize 30 students for protesting those very hate crimes.

Jenn M. Jackson, whose Twitter account says she’s a political scientist at Syracuse, tweeted “Three of my students have been suspended because they are protesting on campus. How does this encourage students at the margins to voice their concerns about racism on campus?”