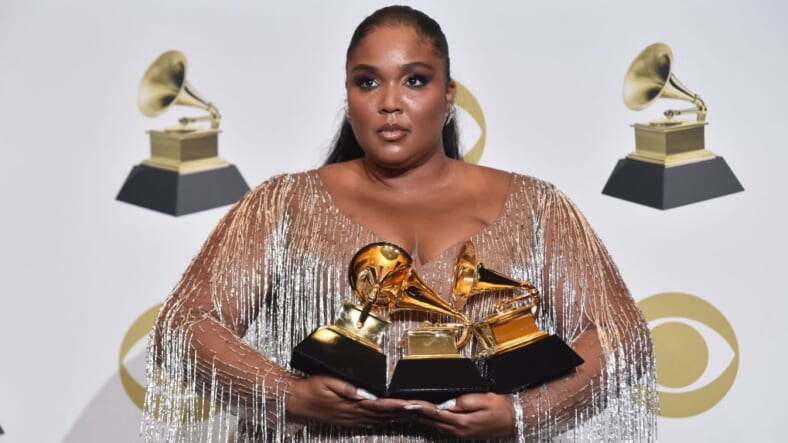 (Photo by Alberto E. Rodriguez/Getty Images for The Recording Academy)

Do big girls get censored more heavily on TikTok than their smaller counterparts? Lizzo seems to think so and she has no intention of staying quiet about it.

Tuesday, the three-time Grammy winner got on the popular app and posted her lip-synch to Erin McMillen‘s cover of Irving Kaufman’s 1926 song, “Tonight You Belong to Me”. She also took it as a moment to blast the service for targeting some of her recent videos.

“Tiktok keeps taking down my videos of me in my bathing suits,” the entertainer, who has 15.2M social media followers, wrote in the caption to her post. “But allows other videos with girls in bathing suits. I wonder why? TikTok…we need to talk.”

To her point, the video-sharing social networking service that launched in 2017 recently put one of their biggest users Charli D’Amelio‘s latest bikini dance clip on their trending list. It does beg the question of why her scantily clad videos are ok but others are not.

@lizzo YOU KNOW, SHE KNOWS, like look what followed her video about bikinis! I’m shook ! @tiktok_uk @tiktok_us SORT IT OUT #LIZZO #tiktokexposed pic.twitter.com/WjJeyVNthD

READ MORE: Lizzo on changing her mind about motherhood: ‘I’m open to the idea of children’

Lizzo has always been a body positivity advocate. During an incredibly candid discussion with The Sunday Times recently, she revealed that in the past she struggled with “body dysmorphia,” a mental health disorder in which a person obsesses over a perceived flaw in their appearance.

Due to that, these days she’s more concerned about addressing her own feelings about her body than responding to hate from trolls.

“I’ve come to terms with body dysmorphia and evolved,” she concluded. “The body-positive movement is doing the same thing. We’re growing together, and it’s growing pains, but I’m just glad that I’m attached to something so organic and alive.”