The 'Daily Show' host joked that he expected Harris to demand $10,000 in unmarked bills if her family ever wanted to see her again 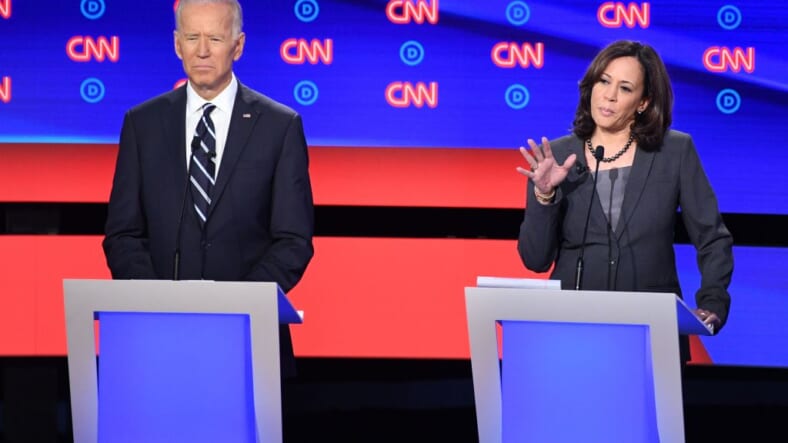 Democratic presidential hopeful US Senator from California Kamala Harris (R) delivers her closing statement flanked by Former Vice President Joe Biden during the second round of the second Democratic primary debate of the 2020 presidential campaign season hosted by CNN at the Fox Theatre in Detroit, Michigan on July 31, 2019. (Photo by Jim WATSON / AFP) (Photo credit should read JIM WATSON/AFP via Getty Images)

Sen. Kamala Harris may be endorsing Joe Biden but Comedy Central’s Trevor Noah couldn’t help taking note of and then mocking the incredibly awkward “hostage-style video” aspect of it all.

During Monday’s episode of The Daily Show, Noah called out what he believed to be a jarring lack of actual enthusiasm from Harris as she robotically (and ironically) declared her “great enthusiasm” for Biden in his bid to become the Democratic nominee.

“Now, please send $10,000 in unmarked bills so that my family can see me again,” the comedian teased after playing a clip of the senator’s video. “I don’t understand why Kamala Harris shot this hostage-style video to show her support for Joe Biden. It looks weird. It really does. I bet even the Taliban is looking at this video, like: ‘We had better lighting and we were in a cave! Much better, much better!’”

“American Politics is a little strange. How is Kamala going to endorse Joe Biden and not acknowledge that she once called him a friend of racists who opposed integrated public schools?” he asked.

Noah was alluding to how Harris came after Biden’s civil rights record in the first Democratic primary debate last June.

“For me, you have to at least say, ‘Look, I know we’ve had our differences, but…’ or something like that, otherwise, you make it seem like we’re crazy. It’s like you’re gaslighting us,” Noah said.

He then effortlessly slipped into a Harris impersonation. ‘I’ve known him for a long time and he’s great.’ During the debate? ‘Aw, that was different.’

“This is like when you were a kid, did you sleep over at a friend’s house and you could hear their parents screaming at each other in the next room? And then they’d come out like, ‘Hey, do you want pizza for dinner?’ Are we not going to acknowledge the Dateline NBC shit that just went down? Alright, because I’ll have pepperoni.”