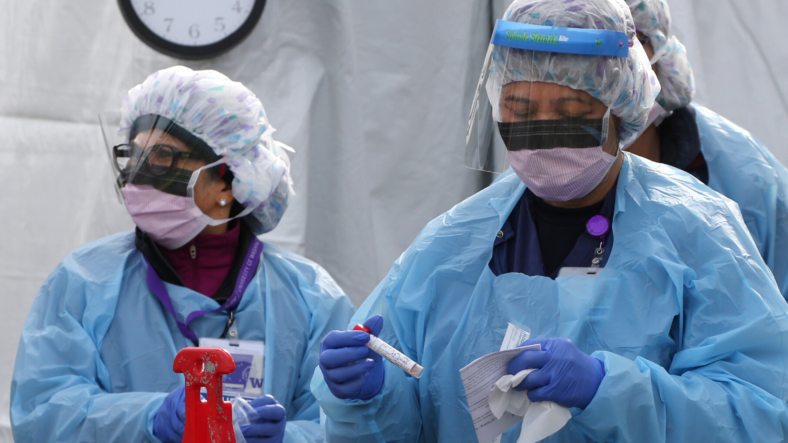 Nurses process a sample for COVID-19 after a patient was screened at an appointment-only, drive-up clinic.(Karen Ducey/Getty Images)

Two Georgia health care workers, both in their forties, have died after contracting COVID-19. The women are the first two medical personnel in the state to succumb to the disease.

One woman, 48, worked at Donalsonville Hospital in southwestern Georgia. She died last Thursday in a Tallahassee, Florida hospital and had a chronic health condition, according to the Georgia Department of Public Health. Donalsonville Hospital officials released a statement after news of her passing but did not disclose the woman’s name or job.

“Healthcare workers are on the front lines of fighting the virus and deserve the utmost respect and honor for doing their jobs,” the hospital wrote in the statement, according to the Atlanta Journal-Constitution.

The second woman, 42, who is also unnamed, worked at Piedmont Newnam Hospital as a mammogram technician. She was discovered dead inside her home last Thursday. Test results confirmed a positive result for COVID-19, Coweta County Coroner Richard Hawk told the Atlanta Journal-Constitution.

Hawk told the newspaper that the second woman may have been dead up to 16 hours by the time police made a welfare check at her home and found her body. Sadly, the woman’s child, believed to be four or five years old, was also in the home.

The state tally of coronavirus cases, as of Monday, grew to 800. This number was up by 180 people since Sunday, according to state officials. The two women are included in the 26 Georgians who have died of the disease, the Atlanta Journal-Constitution reported.

Also in Georgia, a school employee has tested positive for the coronavirus, the DeKalb County school district reported on Monday, adding that no students were exposed to this employee.