Why we called for Black people to support, not shame, Andrew Gillum

OPINION: Preston Mitchum and Dr. Michael J. Seaberry penned an open letter in solidarity with the Florida politician -- 450 Black men have since signed it.

Mayor Andrew Gillum deserves our support because we rarely receive it in a white America hell-bent on devouring Black people whole. We have seen this exemplified in far too many situations, both on a local and national level. And we are tired.

As we know, it wasn’t long ago when people took to social media to express their disappointment at Gillum’s questionable hotel incident earlier this month. Though we still don’t know exactly what unfolded in the Mondrian Hotel on the morning of March 13, that hasn’t stopped nearly everyone from speculating as if they were present in the room. 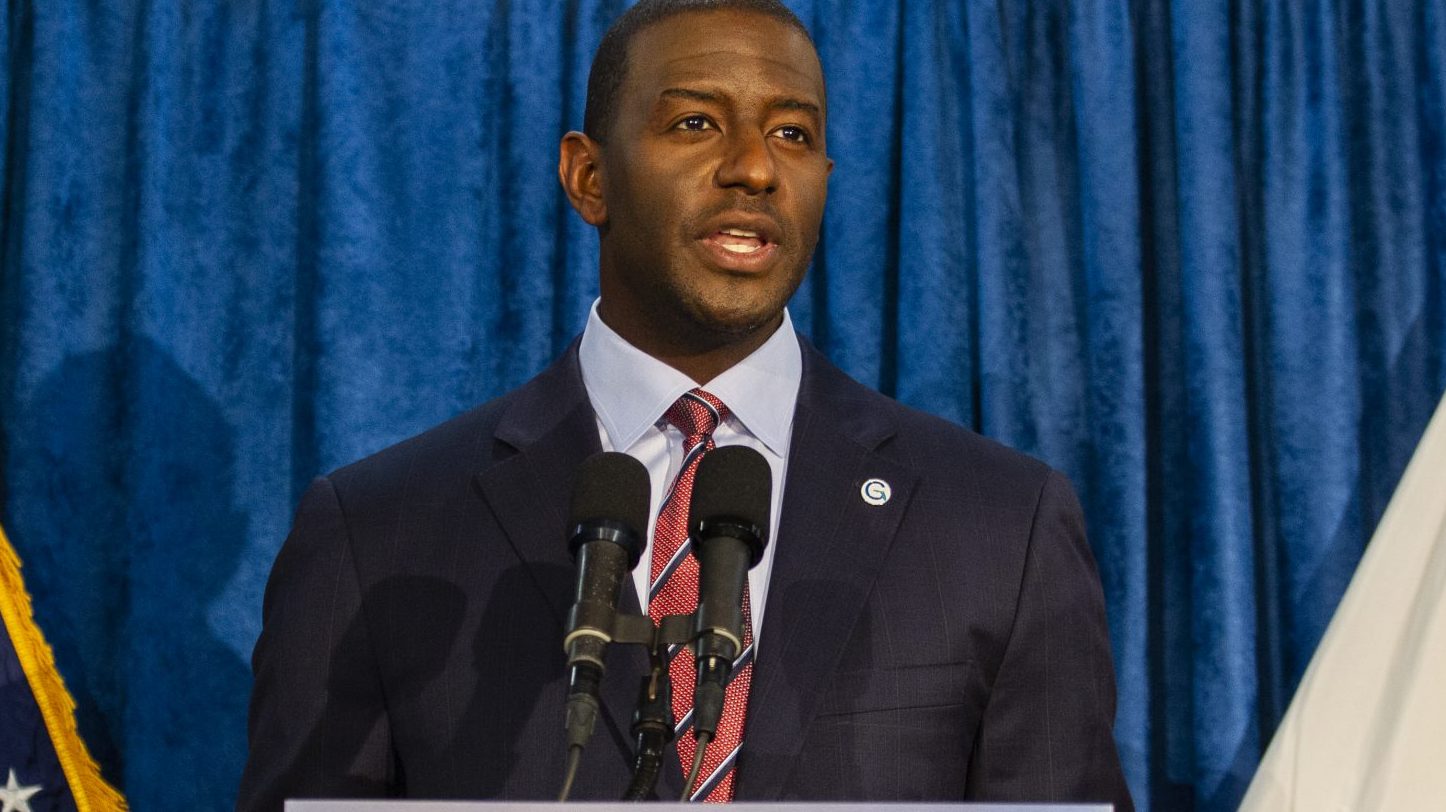 What followed the initial incident was half-baked and problematic news coverage from mainstream media, leaving many of us uneasy about Gillum’s story.

This news coverage was fueled, in large part, by Black conservative Candace Owens obtaining Gillum’s police report and sharing it with her two million Twitter followers. An investigation has since been launched against Owens, though it is unclear what kind of penalty she could face for posting a copy of a possible illegally obtained police report.

This coverage has also been fueled by the sensationalizing of a Black male body being laid on the ground and sold in an effort to entice readers to click, like, and share. Let us be honest, Owens was, and always has been, a conduit for white male patriarchy.

That’s just one reason this takedown of Gillum feels personal. We also know over the last several years, Gillum built a particularly large fan base as the first Black mayor of Tallahassee, Florida. That base significantly increased in his high-profile close defeat in Florida’s 2018 gubernatorial election against Governor Rob DeSantis. For many, he was viewed as the next President Barack Obama, and with his rhetoric and progressive policy proposals, it was easy to rile support. 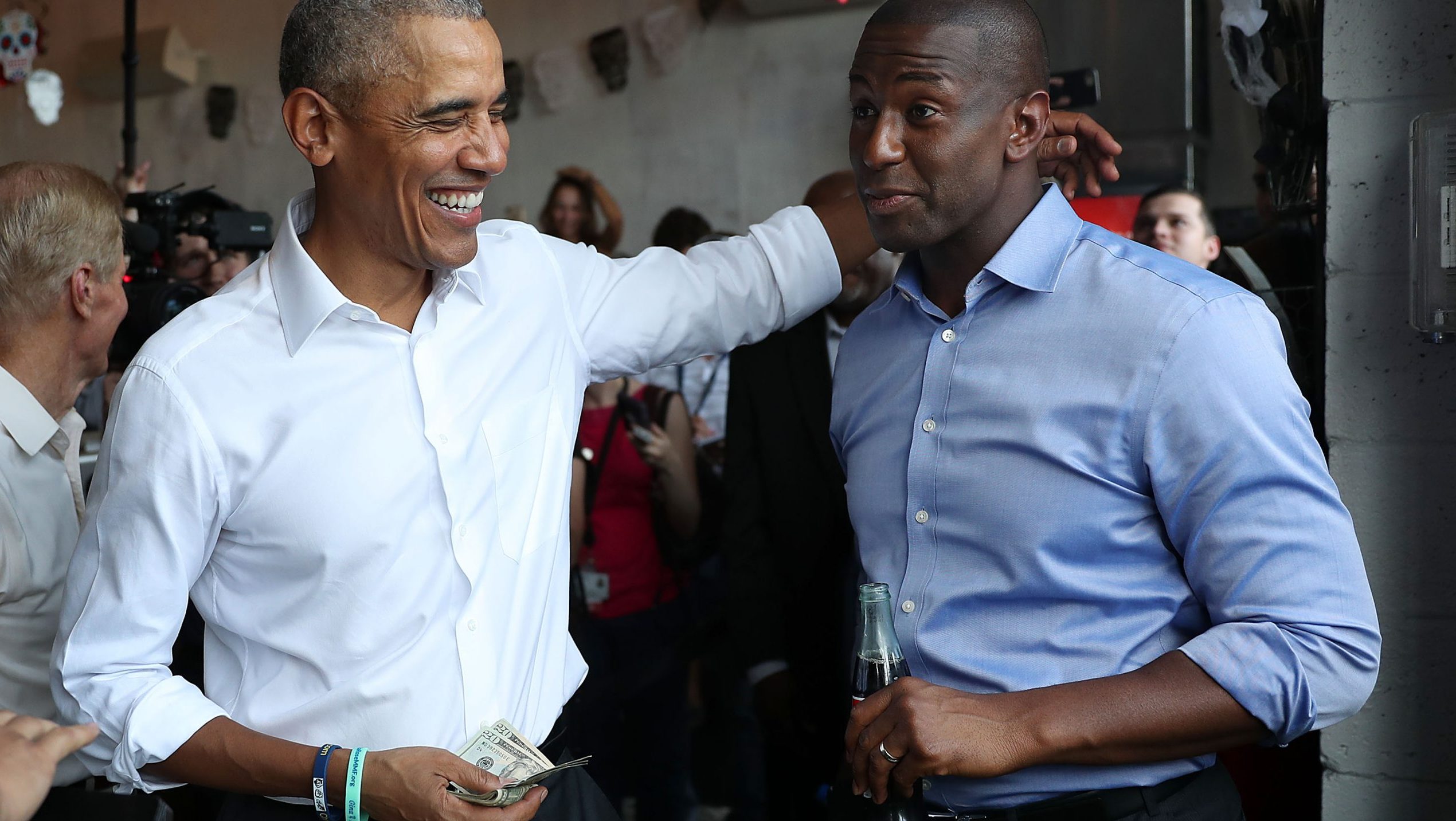 Former President Barack Obama orders lunch with Florida Democratic gubernatorial candidate Andrew Gillum at the Coyo Taco restaurant on November 02, 2018 in Miami, Florida. Former President Obama visited the area to campaign for Nelson and Gillum who are in tight races against their Republican opponents. (Photo by Joe Raedle/Getty Images)

But that’s not why we penned our open letter supporting Gillum and his family. We did so because all too often Black men are rarely afforded opportunities to fail, perpetuated by media coverage willing to swallow us whole.

We decided to write the open letter a mere few days after the Daily Mail published revolting photos of Gillum, while in a vulnerable state. It is that precise reason why many people found it difficult to discuss what’s happening with Gillum — we aren’t exactly sure how to have this conversation.

Since long before the deaths of Michael Brown, Sean Bell, and Philando Castile, Black men’s bodies have been slain across the ground and amplified across every screen we own, and we have not been afforded the chance for redemption.

We penned this letter because, this time, the Black body that was lying on the ground, surrounded by limbs of white men, reminded us of the same emotional, spiritual, and psychological trauma we endured when we watched our brothers be killed on slave boats, lynched on trees, and now in city streets. 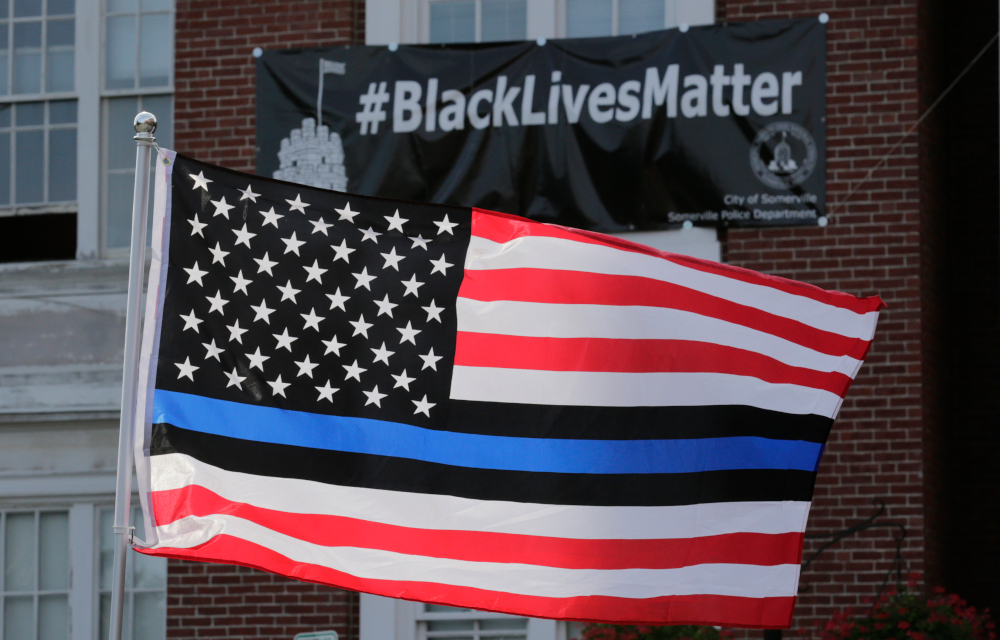 The only difference is that this one is still alive and deserves grace. Instead of a smear campaign against his integrity, honesty, and livelihood that is led by a conservative Black woman and fueled by hatred and homophobia from Black men, Gillum deserves support.

“Fellow Black men, allow this letter to be a reminder that we, too, must be allowed the space to explore, mess up, reevaluate ourselves and become anew,” our letter reads, in part.

“Unfortunately, the world often decides our fate based upon our trials, while white men are regularly afforded myriad opportunities and space to ‘fail.’ Failure often backed by a system that protects them and incentivizes this dangerous cycle. We have the power to change that.” 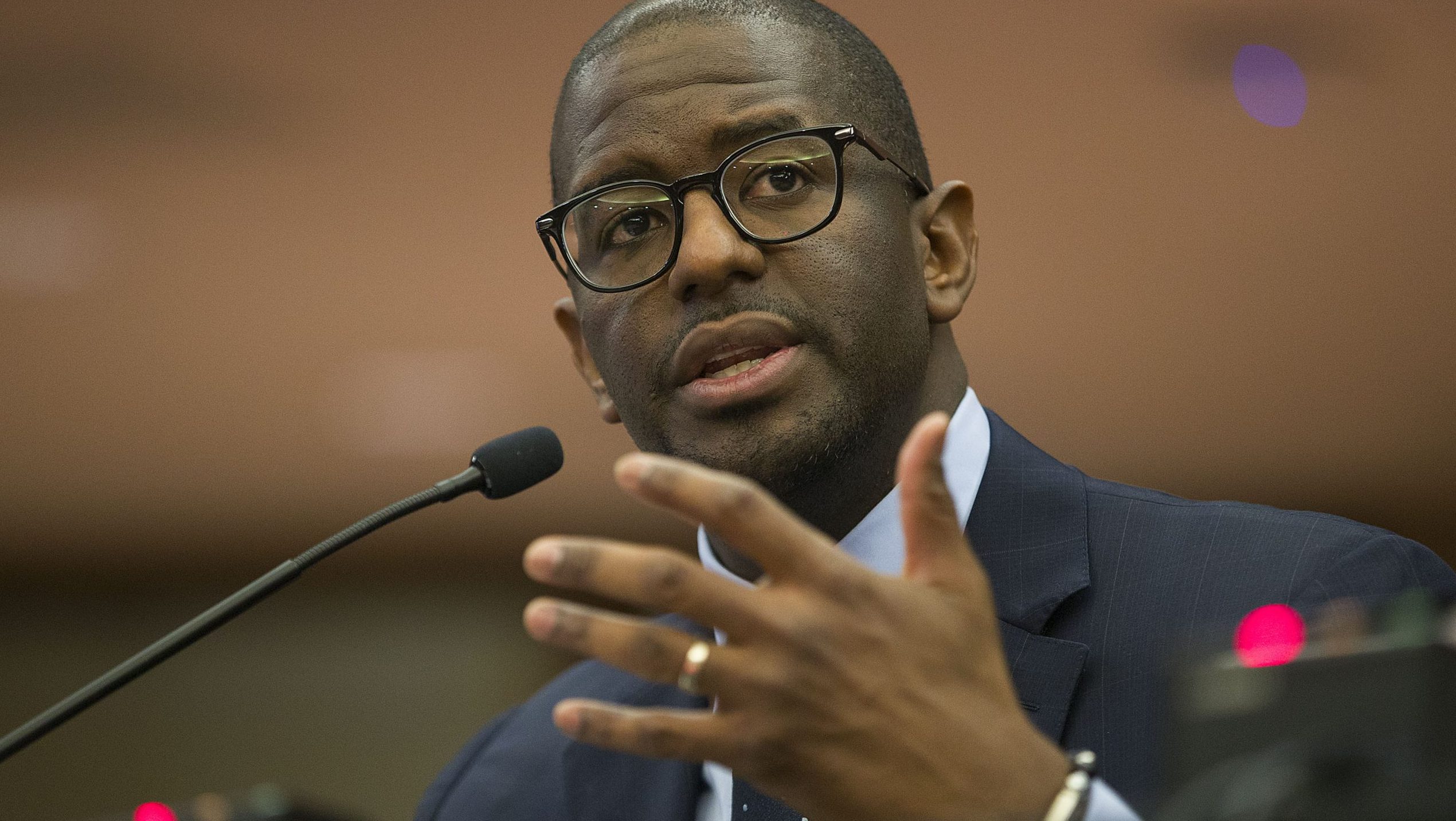 Andrew Gillum, Forward Florida Chair, speaks during The Elections Subcommittee field hearing on ‘Voting Rights and Election Administration in Florida’ at the Broward County Governmental Center on May 06, 2019 in Fort Lauderdale, Florida. The subcommittee is visiting different parts of the country examining voting rights, as well as evidence of voter purging and voter suppression efforts among other voting related issues. (Photo by Joe Raedle/Getty Images)

To be sure, no one is irredeemable, but society somehow seems to forget that when it comes to Black lives. We are witnessing a former elected official with a promising political career naked, lying around his vomit, potentially set up by people who claimed to be his friend. There are obviously many things happening at the same time. But instead of avoiding the conversation out of fear, we wanted to lean into it because we know that’s what grace, compassion, and nuance requires.

Though Gillum is a public figure and may eventually need to have a tough reckoning with the truth, whatever that truth is, he must also have time to do so. The problem with mainstream media and viewers is that we become desensitized to people leading complex lives and having real needs.

It is because of this that we expect instantaneous responses to trauma, but that isn’t safe and that is not how we live our lives. There’s a way to handle this with grace and authenticity, and Gillum must be provided space to do just that. This open letter was a mechanism people could use to support Gillum and his family’s right to privacy for the above-mentioned reasons. 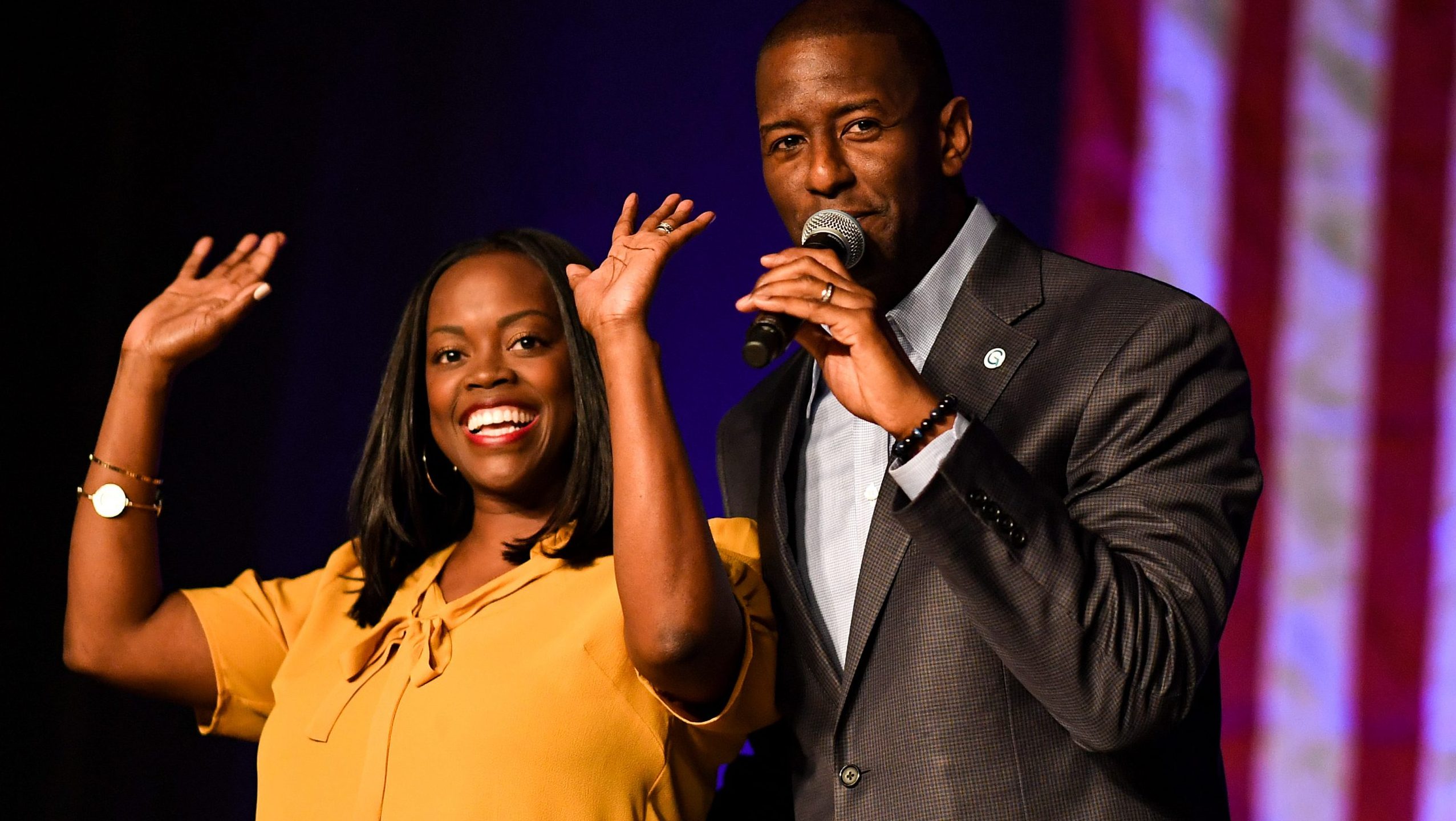 Florida Democratic gubernatorial candidate Andrew Gillum is joined by his wife R. Jai Gillum at a campaign rally in the CFE arena on November 3, 2018 in Orlando, Florida. Gillum, the mayor of Tallahassee, is facing off in a close race against Republican candidate Ron DeSantis. (Photo by Jeff J Mitchell/Getty Images)

Gillum’s layered, nuanced life is not an outlier in the Black community. There are many Black men (and women) whose lives are intricately woven through different intersections of race, class, sexuality, gender, religion, and, even, intellect.

We understand that not every person agrees with the support we have penned to Mayor Gillum, and we do not fault you for that. The American culture that we live in was not created by us, but it was inherited and is perpetuated by many of the people who did not sign the letter.

As author bell hooks says in her 2004 book We Real Cool: Black Men and Masculinity, “In patriarchal culture, all males learn a role that restricts and confines. When race and class enter the picture, along with patriarchy, then black males endure the worst impositions of gendered masculine patriarchal identity.”

In other words, men have been socialized into heteronormative patriarchal ideas for centuries. When you add race and class to that, as we must do with Gillum’s identities as a Black male politician, then you must understand that American society sees those identities as targets — games, in a sense, that are to be figured out, played, and mastered. This can become overwhelming and, sometimes, unbearable to endure.

As the open letter reads, “Black life, in moments of pain and terror, has long been delectable to the American palette.” We are thankful that nearly 450 Black men have signed onto this letter — and now leave it open to all Black people — agreeing that the vast majority of us deserve a second chance to learn and to redeem ourselves through community, grace, and accountability.

The letter serves as a start, not the end, of doing just that.

Preston Mitchum is a Black queer Washington, DC-based writer, adjunct professor of law in LGBTQ+ health, and policy advocate for reproductive health, rights, and justice. Follow him on Twitter.

Dr. Michael J. Seaberry is a Metro Atlanta-based secondary science teacher, researcher, activist, and curator of all things concerning the liberation of Black boys and men. Follow him on Twitter.