On the latest episode of ‘The Tiny Jo show’, Harris and co-host Shekinah Jo Anderson believed that Cosby has served enough time in prison for rape and that some of the women were lying 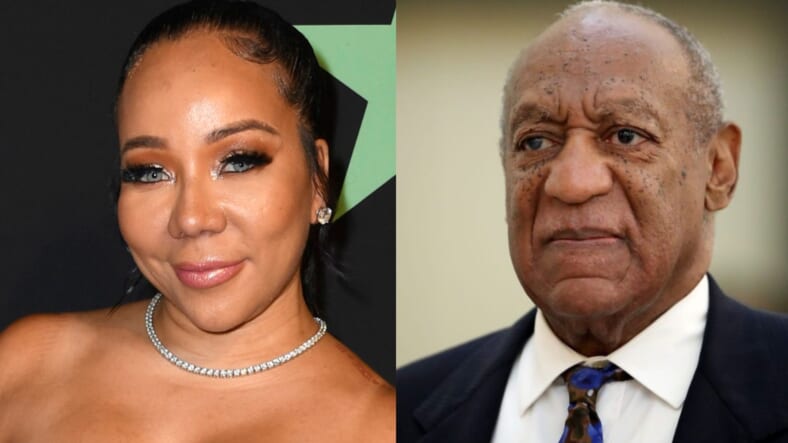 Tiny Harris is no stranger to controversy but this week both she and cohost Shekinah Jo Anderson raised some brows while sharing their views on Bill Cosby during an episode of their podcast.

In the latest installment of The Tiny Jo Show, the two women both confessed that they believed the disgraced comedy legend should be released from prison due to the coronavirus pandemic.

In September 2018, Cosby was sentenced to three to 10 years for drugging and sexually assaulting Andrea Constand at his home outside Philadelphia in 2004. More than 60 women accused the actor of sexual misconduct.

In this April 26, 2018 file photo, Bill Cosby, center, leaves  the Montgomery County Courthouse in Norristown, Pa. Cosby will be sentenced on Sept. 24, five months after he was convicted of sexual assault. Judge Steven O’Neill set the date on Tuesday, May 15, 2018. Cosby’s lawyers had asked to delay sentencing until December. (AP Photo/Matt Slocum, File)

There has been a call for prisons all over the country to convert the sentences of non-violent offenders to a home arrest to reduce the spread of COVID-19.

“I f*cking love it,”  Harris said at the prospect of the 82-year-old being sent home.

“No disrespect to the women that were involved,” she noted sheepishly. “I just feel like Bill [Cosby] is older, and he’s been in there doing his time. I’m not sure how much time he did.”

“I think it’s f*cked up that you women did that to Bill,” Anderson responded when asked how she felt about the case. “‘’Cause nine times out of ten, real talk, y’all was trying to f*ck y’all way to to the top.”

Anderson then went on to share her theory that many of the victims’ stories were untrue because some women will do anything for fame.

“You know how bad people want fame and want to be a celebrity these days? They’ll do anything for a role,” she opined.

Harris clarified that although she agreed that the entertainer should come home, she also acknowledged that her friend needed to be wary of victim-blaming.

“I feel like that’s not fair,” she rebuffed. “We know that goes on, but that’s not fair to do to the victims because we don’t really know they story.”

Do you believe Bill Cosby should serve the rest of his sentence under house arrest?