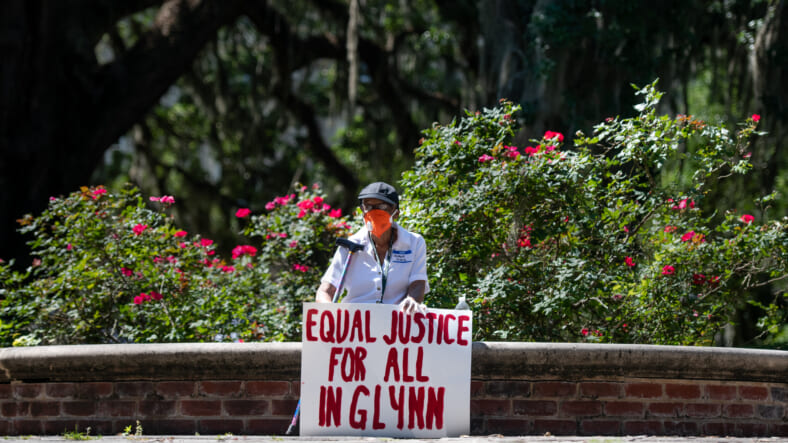 A demonstrators protests the shooting death of Ahmaud Arbery at the Glynn County Courthouse on May 8, 2020 in Brunswick, Georgia. (Photo by Sean Rayford/Getty Images)

The police department at the center of the Ahmaud Arbery murder case has been the target of blistering critiques over the last few weeks, due to what many believe was a gross mishandling of a modern-day lynching. Now it appears a Georgia bill could make that department obsolete.

READ MORE: Note left at Ahmaud Arbery’s death site ‘I should have stopped them’

Next month, state lawmakers will be voting on a measure that would allow Georgia voters to completely dismantle the Glynn county police department, which has a long history of tampering with crime scenes and using retaliation tactics against those they believe to be whistleblowers.

Senate Bill 504 calls for a November ballot referendum that would allow state residents to vote on whether county leaders should disband the department and merge resources with the county sheriff’s office.

Ligon Sen. Bill Ligon who introduced the bill earlier this year told WJCL-TV that it was based around a scandal in the department that included allegations of witness tampering and that police were sleeping with drug informants. Several Glynn county officers were indicted in that case in March, including Chief John Powell. Ligon will not seek reelection this year after a decade in office.

The original bill, introduced in January, had its legality challenged because it would have impacted county police departments across Georgia. But  Senate Bill 504 has now been amended to narrow its scope and only focus on the notorious Glynn County PD.

Arbery was killed on February 23, but it took media attention and a public outcry before Gregory and Travis McMicheals were arrested on May 7th. Gregory, Travis’ father was a police officer for the Glynn county police department and an investigator for the Brunswick, Georgia district attorney’s office before his retirement in 2019.