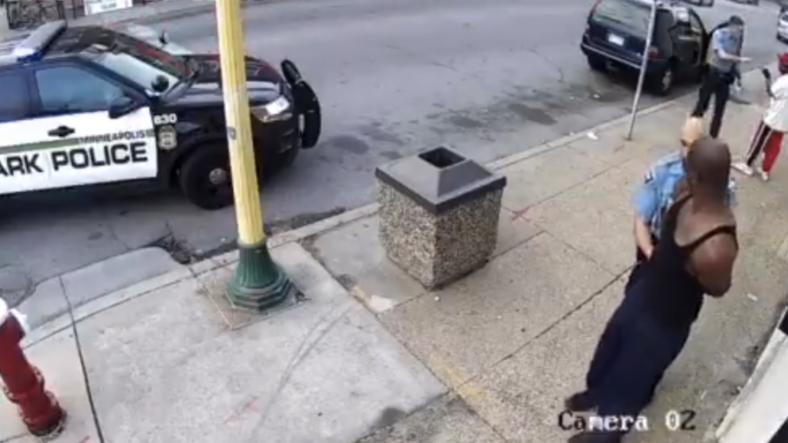 Screenshot from additional video of officers arresting George Floyd and him not resisting them.

Surveillance camera footage from a nearby restaurant shows a new angle of the arrest of George Floyd which ultimately led to the man’s death.

The video, which was obtained by CBS News was posted to Twitter yesterday.

This angle shows Floyd in handcuffs sitting against a wall. He is then lifted to a standing position by an officer and a second officer comes over. The two officers then walk Floyd toward the car, which is where the video ends.

MORE: Video obtained by CBS News shows what appears to be the start of the confrontation between George Floyd & Minneapolis police officers. A restaurant’s security footage shows cops taking him into custody, but the restaurant owner says it does not show Floyd resisting arrest. pic.twitter.com/KR8r7B1WPl

Fox 9 also published a video.  In this dashcam footage, taken even before this store’s surveillance video, viewers can clearly see officers placing cuffs on Floyd.

What happened next was captured on bystander video. It shows Floyd on the ground, handcuffed, with an officer pressing his knee into his neck for at least eight minutes.

Overnight, more details have emerged about the officers involved in the killing of Floyd.

Former MPD officers, Derek Chauvin and Tou Thao, who participated in the assault that resulted in the death of George Floyd. (Screenshot from video of assault)

While all four of the officers have been fired, but only two have been identified so far. The Asian officer seen standing nearby and talking to bystanders is Tou Thao and the officer who administered the deadly force keeping his knee on Floyd’s neck is Derek Chauvin.

Both officers have previous use-of-force complaints.

In 2006, Chauvin was present when another officer shot and killed a 42-year-old man named Wayne Reyes who reportedly pulled a shotgun on police.

Two years later, Chauvin himself shot and wounded Ira Latrell Toles in the abdomen during a domestic dispute call after he allegedly tried to grab an officer’s gun.

Thao was sued by a man named Lamar Ferguson who alleged that he was detained by the officer and his partner, Robert Thunder. According to the Minneapolis Star Tribune, they handcuffed Ferguson and Thao punched him in the face while Thunder kicked him.

The man was taken to the hospital for treatment and later taken into police custody. Despite protests from hospital staff to allow Ferguson to fully dress, the officers took him to jail in just his underwear and a t-shirt.

Have you listened to theGrio’s new podcast “Dear Culture”? Listen to our latest episodes on Apple, Spotify, and Switcher.