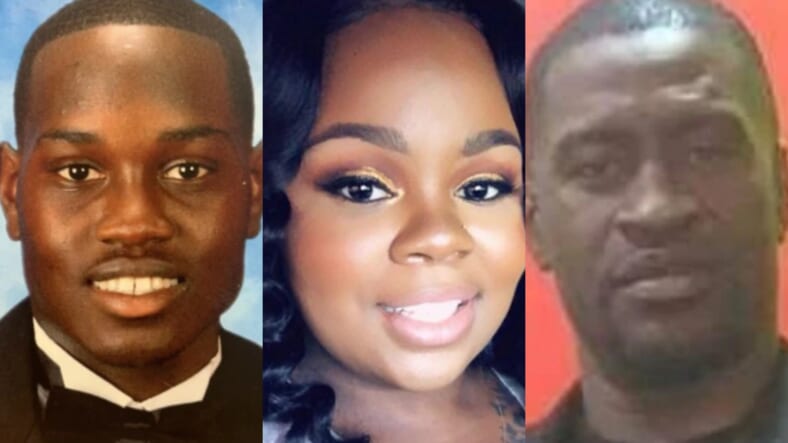 Civil rights attorneys Lee Merritt and Benjamin L. Crump were joined by CNN commentator Van Jones on Facebook Friday to share their expectations in the wake of the back to back tragedies.

They have called for the intervention of Congress to hold hearings and the creation of a national task force with the aim of police accountability and ending racial violence.

“We’re devastated about the senseless violence that has broken the hearts of our families,” the families said in a joint statement.

“While we are grateful for the outpouring of love and support, it’s important that now – more than ever – we use our voices to enact change, demand accountability within our justice system and keep the legacies of Breonna, Ahmaud and George alive. This is a national crisis and our government needs to take immediate and widespread action to protect our Black and brown communities.”

Merritt and Crump expanded on that statement against the backdrop of protests that have taken place across the country. Seven people were shot in Louisville, Kentucky as protestors demanded justice for Taylor. Minneapolis’ Third Police precinct was set ablaze and fireworks ignited as the anger over Floyd’s death continued into its third day.

Merritt stated it was time for a national response as civil rights attorneys across the country could not continue to “galvanize the community and demand they focus their energy on one instance of injustice when we know, there are over 1,000, on average officer-involved shootings a year; that we live in the most incarcerated nation on planet earth and in the process of maintaining that system of mass incarceration, we empower our law enforcement officers to brutalize, focus and over police Black and brown communities.”

Merritt also called on a measured and direct campaign to financially hold these places where police brutality repeatedly occurs.

“We are asking for economic boycotts and sanctions in these communities where these atrocities continue to occur.”

Crump said the “pandemic” of racism and the coronavirus has highlighted the multilayered issues African Americans are currently facing. Not only are they targeted when sleeping while Black and jogging while Black or just trying to breathe while Black; they are also disproportionately dying of COVID-19.

Crump called on Minnesota Attorney General Keith Ellison to take over the Floyd investigation. Crump said it was an insult to Floyd’s family that, at that time, the officers involved in his death had not been arrested yet. Since the virtual presser, Derek Chauvin, the officer shown with his knee on Floyd’s neck has been arrested and charged with murder and manslaughter.

“I really want people to understand how his family is feeling. They watched their brother, their father die while a police officer had his knee on his neck for over eight minutes,” Crump said.

“Put eight minutes on the stopwatch and just think about if somebody had their knee on your neck, constriction your airway and you’re trying desperately to breathe and you’re asking them ‘take your knee off my neck,’ and they won’t do it and you’re struggling until you suffocate to death. Well, that is the tragic last minutes of George Floyd’s life … it is murder.”

Crump also shared that there will be an independent autopsy on Floyd.

“We’re bringing Dr. Michael Baden to perform an independent autopsy because we saw in the Eric Garner case and so many other cases, where they have these people who work with the city come up with things that are such an illusion about ‘you didn’t know he had a heart condition’ or ‘he had asthma.’ All this stuff that is completely irrelevant because they were breathing, walking just fine until the police accosted them and assaulted and battered them,” he said.

Jones said this was an opportunity to end this terror, describing the deaths against Black and brown bodies by the police as an act of terrorism. He also thanked Jay-Z and Roc Nation for helping behind the scenes to help bring forth justice.