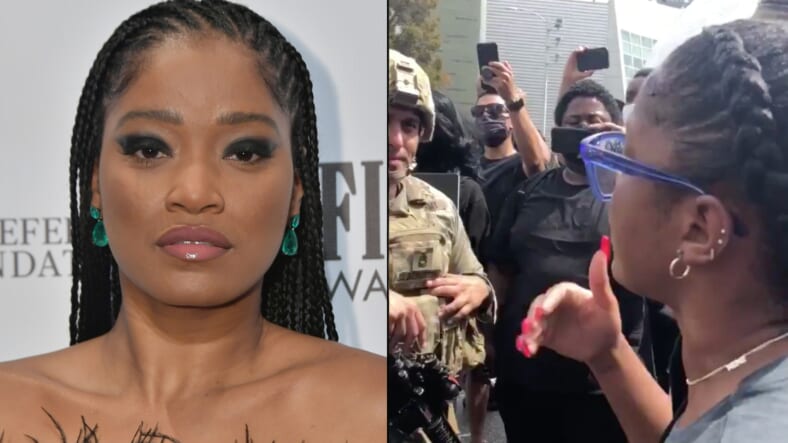 Keke Palmer, actor and co-host of the ABC talk show, Strahan, Sara, and Keke, went viral this week for a passionate plea to National Guard soldiers during a protest in Los Angeles.

Palmer spoke out against the rhetoric being espoused by President Donald Trump, particularly his tweet that read, “when the looting starts, the shooting starts.”

READ MORE: Chicago Mayor Lightfoot on Trump tweet: ‘What I really want to say’ begins with F and it ends with U’

“You have a president talking about the Second Amendment as (an excuse) for people to come out here and use firearms against the people protesting,” Palmer said, “This is the message that we’re seeing.”

“You have to pay attention to what’s going on. We have a president that’s trying to incite a race war, and when the borders are closed. We can’t leave. You have people in here that need your help,” the 26-year-old personality implored, “This is when you and y’all can stand together with the community, with society, to stop the governmental oppression. Period. We need you.”

Watch all of this. pic.twitter.com/YHq0QhXrnw

The viral video was initially posted by NBC News correspondent, Gadi Schwartz, and has garnered praise for Palmer. Fans tweeted kind sentiments like, “Keke Palmer, you won my heart.”

In an interview with Good Morning America this morning, Palmer said, “I wanted to just bring as much awareness as we all can to the injustices that are going on in America,” she told Robin Roberts. “Being there with everyone, we were all just so inspired and, empowered I think is the word.”

In the video, one National Guardsmen told Palmer that he agreed with her. Another said that while he could not march with the protesters, he would take a knee with them in solidarity.

“It would send a huge message,” Palmer said.

In her interview with GMA, the actress and media personality said, “I’m sure many of them feel the same way as we do. I wanted us to just unite as human beings above all.”