Despite announcing a million ticket requests, just over six thousand people showed up

Even though President Donald Trump attempted to take credit for making Juneteenth popular by scheduling his first post-COVID-19 campaign stop on that day, it’s pretty safe to say the rescheduled rally was a disaster, thanks in large part to internet trolls who flooded his website with fake ticket applications.

Although Trump’s campaign manager Brad Parscale once boasted that a million tickets had been requested for the 19,000 seat BOK Center event, when it was all said and done only a measly 6,200 people actually showed up, according to Tulsa officials.

To add insult to injury, due to the inflated attendance number organizers had even designated an outdoor event space to hold the expected overflow crowd, only to find out last minute that it wouldn’t be needed due to poor turnout.

Several reports say that sources close to the administration have privately admitted that approximately 300,000 of the people who signed up for Saturday’s rally were online pranksters trolling the president.

Trump expected tens and tens of thousands of people to show up for him in Tulsa.

I think there may be a sea change taking place around the country and people are catching on to the fraud that Donald Trump is. pic.twitter.com/Ew2rv1hLUF

But publicly campaign advisers have claimed that their supporters had trouble entering the arena, and blamed “radical” protesters and the media for the low attendance. 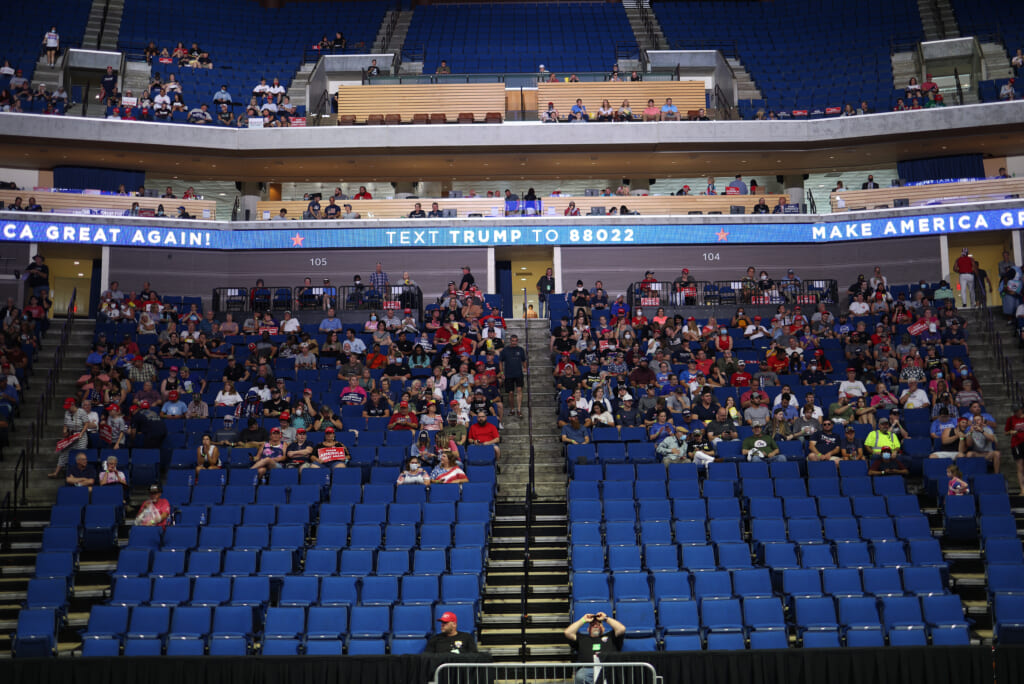 Supporters wait for the start of a campaign rally for U.S. President Donald Trump at the BOK Center, June 20, 2020 in Tulsa, Oklahoma. Trump is holding his first political rally since the start of the coronavirus pandemic at the BOK Center on Saturday while infection rates in the state of Oklahoma continue to rise. (Photo by Win McNamee/Getty Images)

“Sadly, protesters interfered with supporters, even blocking access to the metal detectors, which prevented people from entering the rally,” said Tim Murtaugh, the campaign communications director. “Radical protesters, coupled with a relentless onslaught from the media, attempted to frighten off the president’s supporters. We are proud of the thousands who stuck it out.”

Despite attempts to spin the narrative, barely getting six thousand attendees after claiming there were a million people interested, was such a clear and undeniable failure that Politico did an in-depth analysis breaking down what is now being referred to as “Trump’s Oklahoma debacle.”

1) Trump gazed in "horror" at the sea of empty seats at his rally, and raged at aides over it, a new report says.

His aides conceded to one another that he had failed to bend reality to his will.

This could go down as an iconic moment.https://t.co/RE6vFXA5zm

According to multiple reports, Trump is said to be “furious” that turnout was so low. Coronavirus fears and bad weather in Oklahoma including 95-degree heat and torrential thunderstorms, reports NBC News, may have impacted attendance. But other political observers believe that as the coronavirus continues to spread and protests have rocked the country since the death of George Floyd, Trump’s reelection campaign is on shaky ground.