Already under fire for racially insensitive comedy in the past, the late-night talk show host has been exposed again when audio of a parody album surfaced 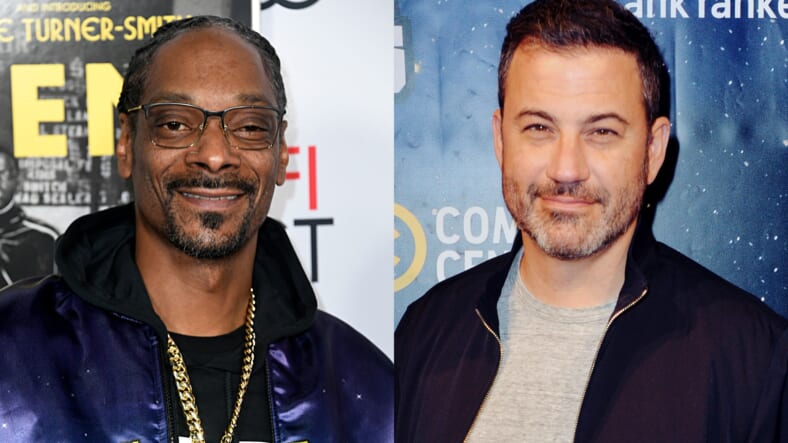 Jimmy Kimmel has already apologized for wearing blackface in the past. But the late-night talk show host may be forced to issue another mea culpa now that new audio has emerged of him repeatedly using the N-word while imitating Snoop Dogg.

Over the weekend Fox News obtained audio of a podcast interview from 2013 with radio personality Adam Carolla, in which Kimmel openly admitted to imitating the rapper’s voice in Snoop’s 1996 “Christmastime in the LBC” track.

“This is when Snoop Dogg first came out, hit the scene, and I used to imitate him by only saying, ‘You know what I’m saying?”’ Kimmel said of the impersonation.

On the track Kimmel can be heard rapping, “Me and my n***er down in LBC, we’ll smoke that motherf***er Christmas tree.” In other parts he repeats the racial slur by saying, “fat n***er in a sleigh giving sh*t away” and also “n***er in the manger.”

Fox also obtained the liner notes which name “Jim Kimmel” as a co-producer.  Kimmel also appears on the album cover.

When asked during the interview if he only impersonated Black people, the talk show host admitted, “I prefer them, yes.”

Kimmel is already facing backlash on Twitter for other racially offensive content in his skits, including wearing blackface, which he apologized for in a statement.

Kimmel recently announced that he was taking the summer off of his talk show, saying that he just needed a break which led to speculation that he took the time off as a way to deflect the criticism. In his statement, he says the vacation was planned for the last year and will happen for the next two years.

“There’s nothing wrong me, my family is healthy, I’m healthy. I just need a couple of months off,” he told viewers. “So, while I’m gone, a cavalcade of very kind and capable people will be filling in for me. I think you’re going to be very happy with them. They will be guest hosting the show.“

JIMMY KIMMEL KNEW. HE KNEW STUFF WAS ABOUT TO HIT THE FAN SO HE TOOK TWO MONTHS OFF. I TOLD YOU. https://t.co/b4Vo8kf8fh