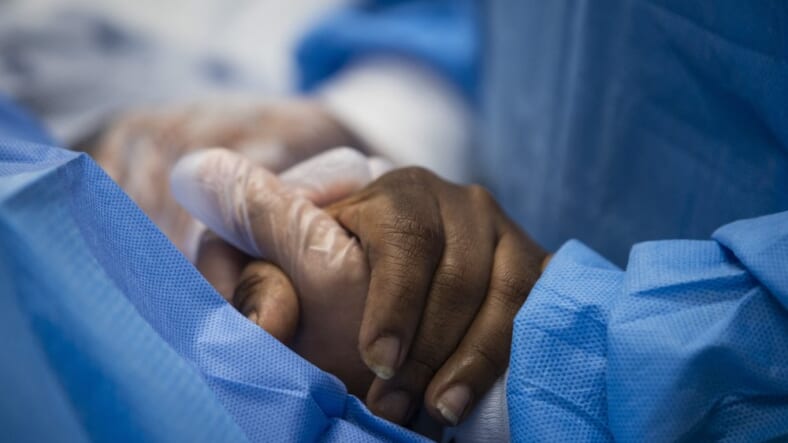 In this April 28, 2020, file photo, nurse practitioner talks to a patient and holds her hand while a doctor administers an IV at Roseland Community Hospital in Chicago. (Ashlee Rezin Garcia/Chicago Sun-Times via AP, File)

The system of racism and white supremacy continues to bear a heavy burden on African American communities throughout the U.S. This is manifested through a lack of employment, high incarceration rates as well as access to health care services.

George Floyd’s death by Minneapolis police has brought about a seemingly national reckoning on racism and the power structures that control our society. Millions of people have taken to the streets to protest Floyd’s death and are demanding changes in a system built upon structural racism.

Pastor Michael McBride and comedian W. Kamau Bell also find themselves in the streets during these times. The pair are well aware of the inequities faced by Africa -Americans, which is why the humanitarian campaign Masks For The People was created to provide personal protective equipment to Black communities.

Masks for the People began as a response to COVID-19 after a conversation McBride had with a friend who worked in health care.

RELATED: Chicago businessman says his PPE supplies were turned down by officials

“He shared with me that PPE was not only very sparse, but there was no dedicated supply chain to ensure that folks in prison, Black and Brown folks in urban neighborhoods, have access to masks,” McBride detailed. “He said that we would need to raise $100,000. I said well, let’s raise $1,000,000.”

Big night on #MasksForThePeople w/ special guests @karankendrickofficial @therealcatbrooks @etanthomas36 @mattday_from_thebay. We got multiple pandemics happening all at once. Let’s get some knowledge to navigate this season and keep donating! We will have some great updates tonight!

McBride called people like Bell, Alicia Garza, Erica Campbell and Bishop Noel Jones to jumpstart his humanitarian campaign and so far has raised $1.4 million and provided PPE to over 20 cities, including Chicago, Dallas, Los Angeles, Atlanta, and New York City.

Fundraising efforts saw a $1 million donation from Twitter CEO Jack Dorsey. They continue to garner support for Masks for the People during Facebook live streams, where McBride and Bell bring on guests to help fundraise and talk about the humanitarian campaign.

“We have handed out over 820,000 masks, 50,000 ounces of FDA approved hand sanitizer that we now make from scratch and sell to corporations,” McBride said, adding that Masks for the People is ready if there is a second spike in coronavirus cases in the fall, which is expected, according to some reports.

McBride is also vocal on his views on alternative policing and says that he supports the demands of protestors to defund the police. He says that people are asking for a refund of their tax dollars that have been used to fund public safety that has only worked at the expense of Black and Brown bodies.

“Most police departments take up to at least 50% of the general fund of our city’s budget and that money can not be used for general services,” he said. “Services like making sure that our schools are well funded and ensuring we have public health specialists that can address issues that police officers should not be responding to.”

Members of gun violence and faith-based organizations and other volunteers make up the workforce needed to package and distribute Masks for the People protection equipment kits.

McBride’s work revolves around reducing gun violence in urban communities through his Live Free organization. He is a native of San Francisco and has been in ministry for over 20 years. McBride says he only has one word he would use to describe the times we are living in: “wicked.”

“I think Black people have to look amongst ourselves for self-determination, taking care of one another and cultivating an imagination for the post-COVID and post Trump era. We must really rally our power—our collective and individual power,” McBride said.