Michigan ‘Karen’ points gun at Black woman: ‘Get the f–k back’

Takelia Hill says that she and her daughters were traumatized, as the woman pointed the pistol in their faces 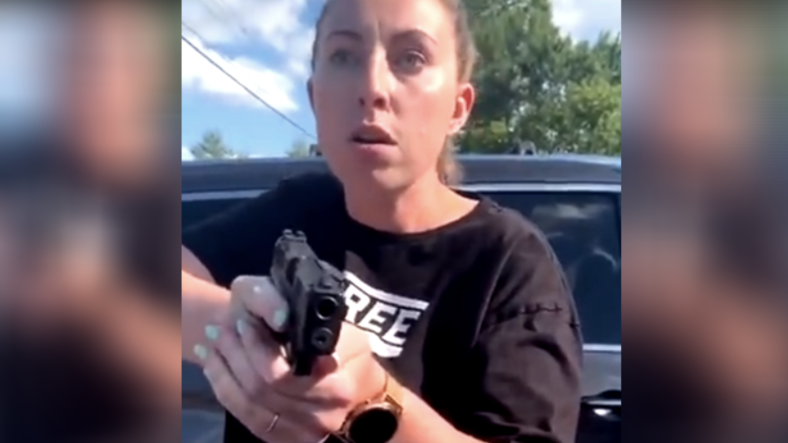 Orion Karen with a Gun (Screenshot)

A disturbing video is circulating online of a white woman in suburban Detroit pulling a pistol on a Black mother and her teenage daughters outside of a Chipotle restaurant.

The incident occurred in Orion Township, Michigan where Takelia Hill was picking up dinner with her daughter, Makayla Green.

“Before I could walk into Chipotle, this woman was coming out, and I had moved out the way so she can walk out.” Green told the Detroit Free Press. “She bumped me, and I said, ‘Excuse you.’ And then she started cussing me out and saying things like I was invading her personal space.”

The newspaper reports that Green called her mother over and that Hill witnessed the woman screaming in her daughter’s face. The initial confrontation was not caught on camera, but Green started filming during the second half.

Hill stated that the woman and her white male driver aggressively backed their minivan up. Feeling threatened, she hit on their back window. It was then that the woman emerged from the car pointing a pistol at the family.

She kept the gun trained on the woman. According to the report, a man later helped the woman into the car. He also yelled at Hill and her daughters saying, “Who the f**k do you think you guys are?”

As the woman returned to her car, Hill asked her why she bumped into her daughter. The woman replied, “You cannot just walk around calling white people racist … White people aren’t racist … I care about you and I’m sorry if you had an incident that has made someone make you feel like that. No one is racist.”

According to Green’s Twitter, the couple was not arrested. However, the police took away their guns.

Update!!!!! They were let go !!! The police just took the guns away !!! Ridiculous!!!! They said they couldn’t arrest her because my niece mother hit there car (with her hand ) to stop them from hitting my niece!!! Justice needs to be served! This is white privilege ??‍♀️

Takelia Hill said that the incident has traumatized her family. In addition to Makayla, Hill’s other daughters were inside the family’s car.