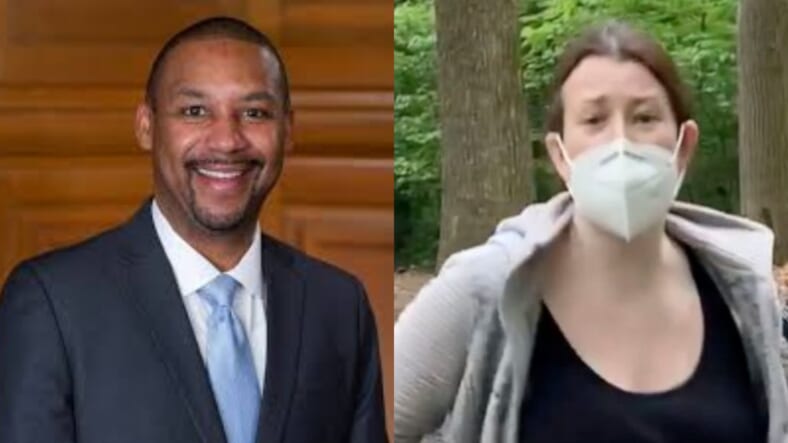 So-called Karens have dominated the news cycle recently for their entitled, racist ways. Amy Cooper, the white woman who called the police in Central Park on an African-American bird watcher after her politely asked her to put her dog in a leash, is perhaps the most egregious latest example.

After calling police on Audubon Society member and Harvard graduate Christian Cooper, saying an “African American man” was threatening her, she has been let go from her corporate job and charged with making a false report.

A San Francisco lawmaker would like to make those kinds of calls a crime. Newsweek reports that San Francisco Supervisor Shamann Walton introduced the ordinance this week. The acronym Caution Against Racially Exploitative Non-Emergencies takes its name from the ‘Karens’ of the world who use white privilege to intimidate others and waste police time and resources by responding to nuisance calls.

“This is the CAREN we need,” Walton tweeted.

“The CAREN Act will make it unlawful for an individual to contact law enforcement solely to discriminate on the basis of a person’s race, ethnicity, religious affiliation, gender, sexual orientation, or gender identity,” Walton said.

While it may seem a trivial ordinance to some, 911 calls have been he catalyst in many fatal police shootings and brutality cases. George Floyd, Elijah McClain, and John Crawford were all killed by police because of 911 calls.

In the case of McClain, the Colorado massage therapist was walking down the street with a face mask on last August after paying for items he purchased in a convenience store run. His family says he wore the mask because he was anemic and often cold.

McClain had the bag with his items in his hands when police stopped him simply because a 911 caller deemed him “suspicious” but also said they didn’t believe he was out to harm anyone.

In Amy’s case, while calling 911 for racially charged reasons is not against the law in New York state, Gov. Andrew Cuomo has gone on record saying it should be. Christian’s viral video led to the outrage that likely led to Amy, who has no relation to him being charged. It was obvious he was not threatening her despite her hysterical call to police.

Amy will be arraigned in October. However, Christian told the New York Times he will not cooperate in the case.

“On the one hand, she’s already paid a steep price,” Christian told the Times. “That’s not enough of a deterrent to others? Bringing her more misery just seems like piling on.”(Photo: Twitter/Screenshot)