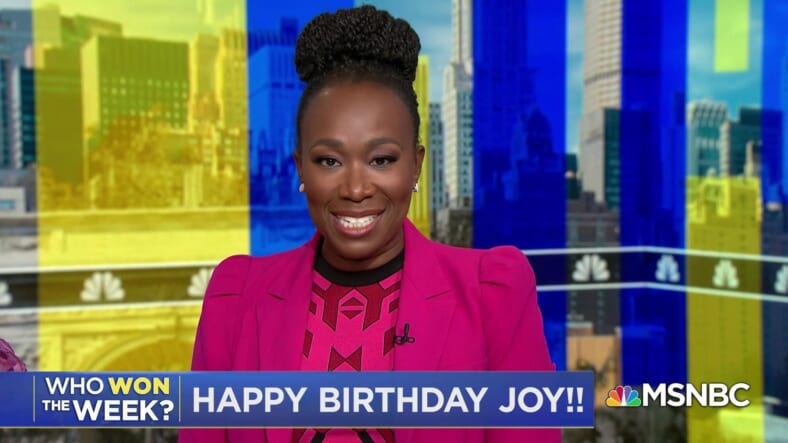 Congratulations are in order for theGrio alum, Joy Reid, who has been named host of The ReidOut, a new weeknight evening program at 7 p.m. EST.

Reid’s new show will premiere Monday, July 20 on MSNBC. Reid will be taking over the time slot previously held by veteran journalist Chris Matthews, host of Hardball with Chris Matthews. This shift will take Reid from her weekend morning show, AM Joy, to prime time.

Some of you may recall our very own Joy Reid was the Managing Editor of theGrio from 2011-2014, and with the launch of The ReidOut, Joy Reid will become the first Black woman to host a prime time talk show. Let that sink in.

Before joining MSNBC in 2011 as a contributor, Reid held a myriad of media-related positions ranging from the co-host of Wake Up South Florida, a political columnist for Miami Herald, press secretary in south Florida for the Obama campaign, and the editor of The Reid Report, to name just a few.

Reid received her degree from Harvard University and concentrated in documentary film.

Reid has published three books and is also a New York Times best-selling author having penned “The Man Who Sold America: Trump and the Unraveling of the American Story” (Harper Collins, 2019).

Reid’s other books include, “We Are the Change We Seek: The Speeches of Barack Obama” (co-authored with E J Dionne, Bloomsbury, 2017) and  “Fracture: Barack Obama, the Clintons, and the Racial Divide” (Harper Collins, 2015) which explores the complicated relationship between Barack Obama and the Clintons, and delves into how faithful Democrats were caught in a whirlwind of swiftly shifting allegiances.

Reid’s new show will be based in D.C. and “will feature one-on-one conversations with politicians and newsmakers while addressing provocative political issues both inside and outside of the beltway. It will draw from her decades-long experience in politics and passion for covering the intersection of race, justice and culture.”

I had the chance to speak to Joy Reid and asked her about the goal of her show.

First and foremost, Reid seeks to inform her audience. As the first prime time bite from Washington, D.C., Reid wants to give people a first look at what’s happening, why it’s happening, and what will happen next, from her unique perspective.

Reid’s goal is to reach audiences of all backgrounds and understand the ways in which particular issues affect them and their real lives.

When I asked Reid what she was most excited about, she said it was the prospect of taking what she and her team built at AM Joy to prime time. The aim is to be as informative and fun as one can be in these crazy times.

What has made Reid a success is that she and her show have always been approachable and accessible to a variety of different audiences. And as Reid takes a new version of her show to prime time, she will build upon the relationships she has built with her viewers.

When I asked Reid if she could give me a scoop, that is, will there be any surprises when the show airs on July 20, she laughed and said, “Surprise! There will be a Black lady in primetime.”

As we move through this new racial reckoning, we must reflect upon the fact that Reid will be the first Black woman to host her own show on prime time cable television. We must celebrate and support this new endeavor, and we must continue to pressure news organizations to cultivate and promote the talented Black journalists in their ranks.

As Reid builds a show that will keep viewers engaged and informed, she was clear to note, “A big part of what allows me to get here is because of my time as Managing Editor at theGrio. Being there and covering stories is a huge part of this opportunity. Thank you all for being there.”

Well, theGrio family could not be happier to have one of our own as a trailblazer and history maker.

For those who are curious, there will be a rotating group of hosts during the current AM Joy time slot until a permanent decision is made in the fall. You can also listen to Reid’s podcasts What to Reid and Reid This, Reid That (with journalist and play cousin Jacque Reid).

Reid’s new show will premiere Monday, July 20 on MSNBC at 7 p.m. EST. Go to @JoyAnnReid on Twitter, Instagram and on Facebook @JoyReidOfficial to send your congratulations.

Christina Greer, Ph.D., is an associate professor at Fordham University, political editor at The Grio, the author of “Black Ethnics: Race, Immigration, and the Pursuit of the American Dream”, and the co-host of the podcast FAQ-NYC. You can find her at @Dr_CMGreer on Twitter and Instagram.