‘Punching the Air’ novel inspired by Dr. Yusef Salaam of The Exonerated Five

Dr. Yusef Salaam and award-winning author Ibi Zoboi craft a tale about a Black, Muslim teenager who is wrongfully incarcerated 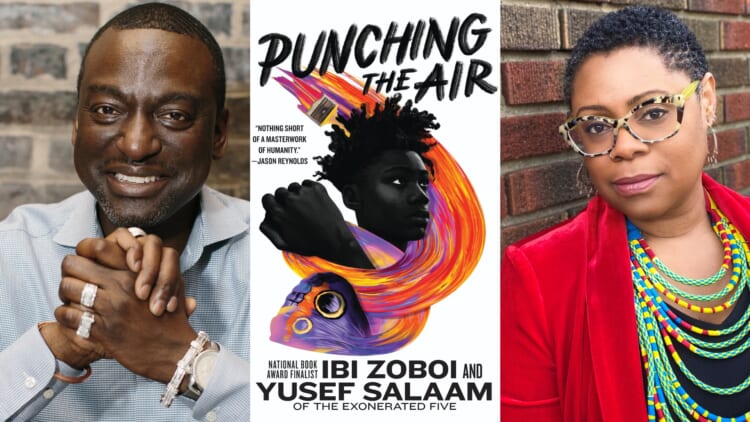 Punching the Air is a novel about a 16-year-old Black and Muslim teenager whose life is interrupted after being wrongfully incarcerated for a crime he didn’t commit in a gentrified neighborhood. Amal Shahid is a fictional character ,but his narrative is lifted from the lived experiences and verses of Dr. Yusef Salaam.

“We didn’t want to tell my story per se, but wanted really to tell the story of the juxtaposition of two Americas,” Salaam exclusively tells theGrio.

“One where you have all of the rights afforded to you under the sun, and the other, where you have to fight for everything. As we see what’s going on right now, we are continuing to fight—a fight that we’ve been fighting since, seems like forever.”

Ibi Zoboi, his co-author and National Book finalist, was in agreement and recalls first meeting Yusef more than 20 years ago at Manhattan’s Hunter College.

“The professor [who] invited Yusef to her classroom was a member of SNCC, the Student Non-Violent Coordinating Committee, and she had gone to Guinea West Africa with the late John Lewis, and they were fighting for change in the ’50s, in the same way that my professor was teaching us to fight for change in the late ’80s and ’90s,” she relays.

She continues, “And then here we are. Still doing the same thing… we’ve had a Black president. We have a Black woman vice-presidential candidate. There are some changes, but systemically, it’s going to be a long haul because systems have not changed much.”

Read More: Quarantine and chill with these books during pandemic

Salaam is one of the five members of the exonerated “Central Park Five.” In 1989, Salaam, Antron McCray, Korey Wise, Kevin Richardson and Raymond Santana were arrested for the brutal rape and assault of jogger Trisha Meili. The teenagers, all of whom were boys of color, were all convicted and sentenced to prison.

Salaam served nearly seven years before his conviction and that of the others were vacated in 2002 after Matias Reyes confessed to being the sole perpetrator.

In Punching the Air, set against the background of today’s world, Shahid “has always been an artist and a poet. One fateful night, an altercation in a gentrifying neighborhood escalates into tragedy, and Amal is convicted of a crime he didn’t commit and sent to prison. Despair and rage almost sink him until he turns to the refuge of his words: his art.”

In recent years, the circumstances surrounding the Central Park incident have once again become a part of the national discourse.  Ava DuVernay’s Emmy award-winning Netflix limited series When They See Us examined what Salaam and the other men went through in precise storytelling.

Salaam explains that the memories are never far from his mind but serve a greater purpose.

“The trauma was necessary because we had to go back and get it, we had to go back and describe it and talk about it and share it in a way that was meaningful, and not just say, ‘I wanna curl up in a ball and cry.’ We had to then toughen up, and I think that that’s what happened over the past 31 years,” he says.

“We were able to transition from the Central Park Five to the Exonerated Five, which was a celebrated transition, and then also use the platform that we’ve been given in order to really effect change.”

Through it all, Salaam’s natural state of optimism, spirituality, and love of arts didn’t diminish. These are traits that flesh out Amal, who has a love of hip hop and painting, and the hope that better days will come.

“We wanted to show the resilience of Amal, in that in his self was the seed of hope. For him to be hope locked in prison as we read the story of Punching The Air, we understand that he is also the water giving us hope, allowing us to be able to find a way out of no way, allowing us to be fruitful and multiply and blossom into the thing that God wants us to be,” Salaam explains.

“And it’s not to say that trauma doesn’t happen, but it becomes pornographic when you’re just showing it for the sake of showing it.”

The authors are also mindful that Punching the Air is being released at a time of civil and racial unrest in the country. Amal’s story of falling victim to the criminal justice system is one that seems to be repeating itself. But neither feels that has to be the default for marginalized children.

“Racism is still brewing beneath the surface when it looks good on the top. Even if this sells a lot of copies, if there isn’t a shift in how people view Black children and criminality, then I don’t think we’ve done the work no matter how successful the book is,” she says.

Zoboi wants the book to be in classrooms and to rethink how art is treated in underserved communities and prison populations. Salaam punctuated her point by wanting hope to be emphasized.

“We want the idea of hope to be placed back into the world, through the story of Amal,” Salaam says.

“The name of the title, Punching the Air, I think was such a befitting title that we chose. Because oftentimes, you go through situations and you have questions to God, or to Creator and say, ‘Why me,’ without understanding that God’s hand is in everything.”

Punching the Air will be released on September 1 from Balzer + Bray, an imprint of HarperCollins Children’s Books, and available for sale in bookstores and online outlets. Entertainment Weekly exclusively revealed that Ethan Herisse, who portrayed a young Salaam in When They See Us, will narrate the audiobook.