The system failed Breonna Taylor. It will meet the wrath of Black America.

OPINION: Wednesday's grand jury decision was felt in Louisville, Kentucky and across the nation. We must not rest until there is true justice. 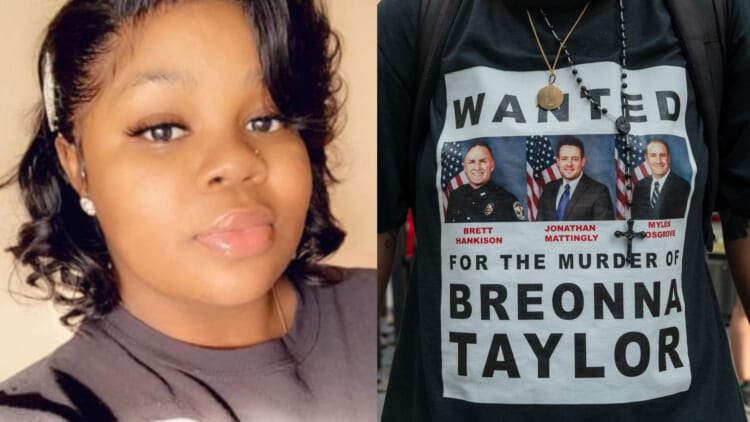 Every Black person walking this earth is literally a miracle.

I don’t want to start this letter to you with any hopes of you being well. I will not use my breath to insult you or the way in which you left this earth. I am not sure what religion you practiced, if any, but I do know that Black women, like yourself, become angels on the other side of this life. I am angry that you have become one so soon.

For a moment, I would like to imagine a world in which you were not killed in a state-sanctioned murder. Imagine that you are asleep in your bed in the early hours of March 13 and you hear a knock on your door. They announce themselves as the Louisville Metro Police Department, there to serve a warrant. You and Kenneth, your boyfriend, hear their announcement and Kenneth immediately jumps up to protect you as any Black Man would and you reassure him that all is well.

The both of you walk to the door, led by Kenneth’s bravery, and answer to find three police officers serving a search warrant. They hand you a warrant for your review, attempt to enter your home, and you remind them that the warrant is issued for another address, another person. They apologize and leave. You and Kenneth go back to bed until your alarm rings to wake you up for work. You lean over and reach to your boyfriend, kiss him softly, and begin to prepare yourself for a day of saving lives as an EMT.

Since the early hours of March 13, 2020, we have been keeping a record of the wrongs done against you, a deity, a goddess in her own right. We have recorded that your boyfriend, Kenneth Walker III, a Black man, tried to protect you from Louisville officers Jon Mattingly, Brett Hankinson, and Myles Cosgrove and was later charged with attempted murder of a police officer.

Breonna, we all knew how this would end. Before you left this earth, you saw that justice does not exist for Black people in this nation. We knew that when they called us 3/5ths of a person, created the Constitution, Bill of Rights, and many other federal documents that did not consider us, and designed a penal system to target Black people in a country where we constitute far less than half of the population.

We knew it when we saw the outcome of Emmett Till, Sean Bell, Korryn Gaines, Atatiana Jefferson, Trayvon Martin, Botham Jean, Sandra Bland, and the many others that preceded you. What we did not expect was a Black male attorney general to slap us in the face with a politically-driven, callous, and indirect response to the grand jury’s announcement that there would be no criminal charges against the officers who murdered you in your own home. As a Black man, I was hoping that he would see his sister or his mother in your face.

Instead, we watched Attorney General Daniel Cameron, a member of a historically Black Greek organization, save face to keep his ties to the White House and to keep his name on the shortlist of nominees for the open SCOTUS position, preceded by the late Justice Ruth Bader Ginsburg.

Read More: Ruth Bader Ginsburg’s dying wish: ‘I will not be replaced until a new president is installed’

Just like the aftermath of all the deaths of Black people by the hands of police, this nation will not rest until there is true justice. We owe it to you, our ancestors, and our future descendants. There is nothing we can do that will equal the life you lost in March. We will not pretend to get justice for your life. However, we will get justice from the systems that are in place to allow bullets to pierce your body with less repercussions than bullets piercing a wall. We love you, Breonna, and this community, the Black community, will continue to fight for you.

Wednesday’s grand jury decision was nothing new to us. I was driving as I listened to the announcement. My body became numb and I had to position myself in a grocery store parking lot for safety. My mind went blank and it felt like there was no fight left in me to convince this nation that our lives are worth something — anything besides death. According to the timeline on my social media accounts, people are angry, disgusted, hurt, scared, and disappointed. However, people are not tired, yet. My heart bleeds for the Black women in my life who are raw, who are tender, and feel as though they do not have any protection in this world.

Read More: Black women are enough and deserve the benefit of the doubt

I sat and wondered what was left for us to do. We have attempted to write new policies, infiltrate political systems, organize and advocate for vulnerable communities, protest, riot, and even burn down buildings. None of those actions have caused widespread change, at least not enough to stop the murders. Then, I was reminded of Audre Lorde’s “The Master’s Tools Will Never Dismantle the Master’s House.” We cannot fight this fight with the tools they give us. What sense would it make to build a house, then give someone the very tools to tear it down? We have to continue creating our own avenues in which the majority populations recognize our power and begin to create change themselves.

Adam Smith, an HBCU professor and social change agent, eloquently stated, “Until white supremacy deems Black lives valuable and prioritizes Black life above the current establishment, we will see no change. Until whiteness decenters its own interests and deprioritizes its systemic dominion in favor of the lives and liberation of the oppressed, we will continue to revolt.”

For the sake of Breonna and all of the other bodies that have been slain on these hallowed grounds, we must allow Black people to occupy a multiplicity in this fight. We must intentionally make space for each other and force ways in which we can work alongside each other to abolish some systems, reform others, and strategically take back what we built — a nation that has given itself qualified immunity after the murders of our people. Little did they know, we have over 400 years of resistance built within us. Ain’t no immunity to our wrath.

Dr. Michael Jamal (MJ) Seaberry is a Metro Atlanta-based secondary science teacher, researcher, activist, and curator of all things concerning the liberation of Black people. Follow him on Twitter.