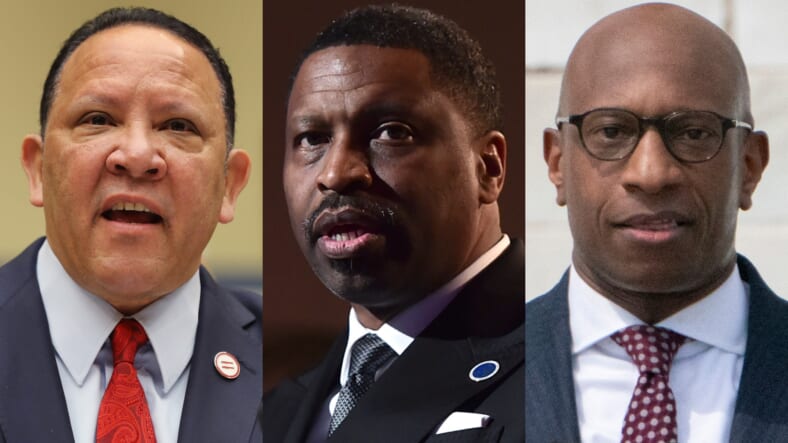 The presidential election is just over a week away and the stakes are higher than ever as the nation is gripped by racial tensions, along with a still-raging pandemic among other concerns. This Monday (Oct. 26), a number of leading organizations are uniting their efforts in support of the Black electorate while addressing their concerns with an aim of inspiring the base to turn out at the polls.

The Lincoln Project, working in collaboration with the NAACP, National Urban League, Black Economic Alliance, and BlackPAC, will host a virtual town hall that will serve as an opportunity for an array of speakers to discuss how Black Americans should mobilize, organize, and take their place in the electoral process up and down the ballot.

They will be joined by analyst and former South Carolina congressman Bakari Sellers, and Philadelphia 76ers Head Coach Doc Rivers among other special invited guests.

Mr. Clunie spoke with theGrio over the weekend from New York while laying out in detail the town hall’s larger aims and what the event hopes to achieve beyond Election Day.

“The goal of the town hall is to demonstrate how impactful the Black vote can and should be, but in particular why it’s so important this year,” Clunie said of why the organizations are holding the event.

“We really want people to understand the collective power of the Black vote. In 2012, Black voters had a higher turnout rate than even White voters but in 2016, we had a significant dip in that regard, and you see how that turned out for us and now we have an opportunity to make a difference,” he added.

Clunie shared that the Black Economic Alliance and its partners have conducted research and focus groups, discovering in their findings that during the last presidential election cycle, Black voters made up the majority of Democratic Party voters in three states President Donald Trump won in 2016 In Georgia, South Carolina, and Mississippi.

With Georgia and South Carolina featuring Black candidates vying for U.S. Senate seats, Clunie made note of how the Black vote can shift the tide in Congress as well as the White House.

“If you think about the history of how many Black people have been elected to the U.S. Senate, only 10 have made it to that level and there are seven Black candidates running for seats this election cycle. With that backdrop, there is so much potential for the Black vote this year and we really have to get folks engaged because clearly, we were not engaged in 2016,” Clunie remarked of the U.S. Senate races nationwide.

“But we didn’t have folks talking directly to us, and there’s that old adage ‘If you’re not at the table, you’re on the menu,’ so we have to take our rightful seat at the table.”

When asked about the difficulties faced by Black Americans in connection to civic participation, Clunie was candid in pointing to the veiled attempts to suppress and disrupt the vote even up until the final days.

“First of all, voter suppression is real. There are strategic, coordinated efforts to make certain that Black voters do not turn out in larger numbers,” Clunie said before launching into a response about how Black voters can get involved beyond voting and maintaining engagement.

“I think a lot of the split happens from Black folks thinking their votes don’t matter. And that happens across the entire nation. Here in New York, we have an idea of how the state is going to go,” Clunie said.

He continued with, “But in battleground states, many Black voters have a problem in seeing the link of showing up at the polls and how it relates to their daily lives. The Black Economic Alliance and our partners that will be at the table for the town hall, we’re attempting to make sure we provide a forum for those voices to be seen and heard.”

theGrio inquired about the Black Economic Alliance’s front-facing stance in that they are a nonpartisan organization and their partnership with The Lincoln Project, which does take a position and is comprised of former or current Republican Party members.

Clunie explained that the Black Economic Alliance is comprised of several components, citing its 501(c)(4) (social welfare organization) status while adding that an internal political action committee is taking a position to vote out President Trump this November and to also vote in fresh, new leadership in Congress as well.

“For this event, really, we want the focus to be on the power of the Black vote and us speaking up. It isn’t about a particular party or standing with a particular candidate, or even standing with the opposition. This issue is bigger than Donald Trump and it’s bigger than any party. This is about Black folks exhibiting the fullness of civic participation based on the power of our vote,” Clunie said.

To register for this free and virtual event, please click here [add this on the WordPress backend to the word “here.”