Republicans speaking against Trump aren’t off the hook

OPINION: GOP members of Congress and the administration helped Trump douse gasoline on America, but now want to blame him for lighting the match 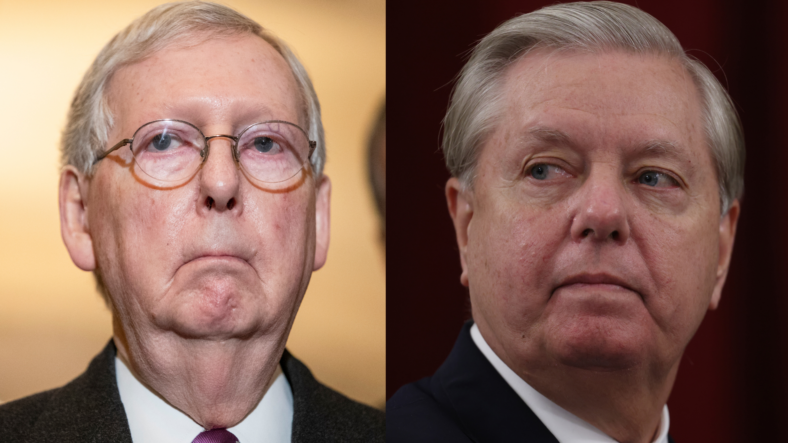 Some Republicans just had an epiphany. They are speaking out against President Donald Trump for inciting insurrection at the U.S. Capitol, where he encouraged his armed followers to storm the Senate and the House of Representatives in an effort to shut down the certification of Joe Biden’s presidential victory.

Five people were killed in the act of domestic terrorism, including one of the terrorists who fatally shot and a federal police officer who was hit in the head with a fire extinguisher.

Now that Trump is leaving office with a legacy of death and destruction — hundreds of thousands of COVID-19 deaths, economic devastation for millions of Americans, and now white mob rule and treason — some Republicans are publicly condemning Trump, and a number of cabinet members and White House staffers have resigned to spend more time with their family, like rats fleeing a sinking ship.

While it is a beautiful thing that we can all come together to shame and call out Trump in his final days in office, we should not let these Banana Republicans off the hook. Republicans should not get a pass after they have enabled this monster for four years, only to finally admit — as some of us have known all along — that Trump is unstable and irrational, a deranged lunatic and a dictator, and a threat to national security.

As longstanding victims of racial authoritarianism in this country and some of the primary targets of this administration, Black America knew this all along. Trump couldn’t do this alone, and now some of his enablers want to throw him under the bus. That’s OK, except they should be under the bus with him.

Perhaps the most glaring examples of GOP leaders seeing the light in the eleventh hour, long after the damage was done, are soon-to-be Senate minority leader Mitch McConnell (R-Ky) and Sen. Lindsey Graham (R-SC). McConnell rebuked Trump and other election deniers for attempting to overturn the election results, and attacked the “unhinged thugs” who “tried to disrupt our democracy.”

The United States and the Senate will not be intimidated.

We are back at our posts. We will discharge our duty under the Constitution for our nation.

And we are going to do it tonight. pic.twitter.com/YH0PtXKDzt

Graham, who once called Trump “a race-baiting, xenophobic religious bigot”– then became a foremost Trump lapdog and golfing sidekick after Russia hacked his email — now blames Trump for instigating the mob and the violent siege that ensued.

“When it comes to accountability the president needs to understand that his actions were the problem not the solution,” said the South Carolina Republican, also blaming Trump lawyer Rudy Giuliani.

Figures such as McConnell and Graham have been instrumental in creating this monster known as Trump. They were in lockstep with their God Emperor and mafia boss when it was politically advantageous to do so. After all, they came to the Trump Party for the tax cuts, the gutting of Obama-era regulations and policies, a white nationalist majority on the U.S. Supreme Court and eliminating voting rights for Black folks.

And when they had the opportunity to shut him down for good through impeachment, they protected him and his criminality. Now the party is over, and someone has to clean up the sh-t that Trump’s MAGA army smeared throughout the Capitol building.

This, as departing and former cabinet members line up to rebuke Trump after the damage has been done and it’s far too late.

Mick Mulvaney resigned as Northern Ireland envoy, claiming others would follow, and that Trump has changed. “We didn’t sign up for what you saw last night,” Mulvaney said. “We signed up for making America great again, we signed up for lower taxes and less regulation. The president has a long list of successes that we can be proud of.”

As Citizens for Responsibility and Ethics in Washington (CREW) tweeted: “Elaine Chao and Betsy DeVos aren’t taking some brave moral stand by resigning now. They knew how terrible he was. By getting out now, they avoid the 25th Amendment debate. They’re enabling Trump, not standing up to him.”

Former White House Chief of Staff John Kelly, who helped Trump enact a racist policy of putting migrant kids in cages, now serves on the board of the largest company locking up migrant children. Kelly, who also disrespected Rep. Frederica Wilson and exposed the Black congresswoman to death threats by calling an “empty barrel,” now supports the 25th Amendment to remove his ex-boss.

And Attorney General Bill Barr, who acted as Trump’s personal attorney and presided over the hollowing out of the Justice Department, civil rights and the rule of law, had his own phony coming to Jesus moment when he condemned Trump for “orchestrating a mob to pressure Congress” and committing a “betrayal of his office ”— as if everything up to that point was fine.

Those who wallowed in the filth of this administration are now taking the high road as if we have forgotten these Republicans were Trump cheerleaders and devoted MAGA cult members just a few days ago. Trump sycophants and foot soldiers are trying to rehabilitate their image, find another lucrative job and pretend they never knew Trump — or pretend they were the adults in the room, remaining in the White House only to preserve democracy.

Not only should the public remember the role they played, but these enablers should be held accountable, ostracized and barred from public life. No corporate boards, speaking gigs, book deals or university professor gigs.

They helped Trump douse gasoline on America, but now they want to blame him for lighting the match. Come on, now.