OPINION: If Black police chiefs such as Danielle Outlaw are unwilling and unable to do right by the community, they must get out of the way 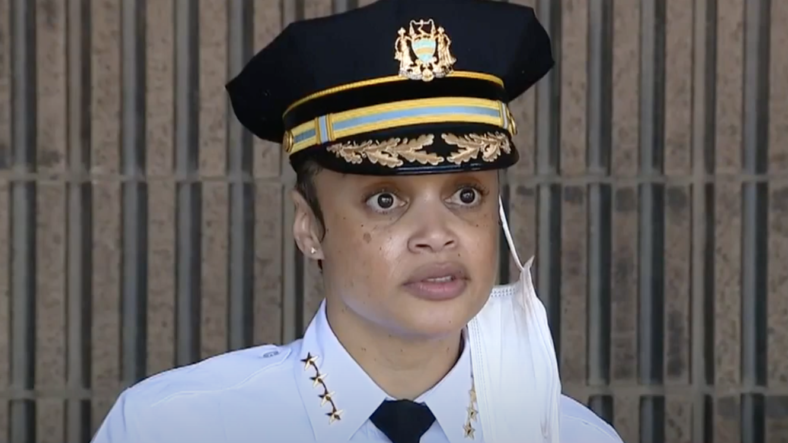 The first Black woman to lead the Philadelphia Police Department, Police Commissioner Danielle Outlaw authorized tear gas on peaceful Black Lives Matter protesters. Outlaw must go because she is doing the Black community no good, but the larger issue is, what exactly should be the role of the Black police officer, and what is their responsibility to the community?

Outlaw took the helm only months before the Black Lives Matter protests that erupted last spring and summer following the murder of George Floyd by Minneapolis police. Hopes were high that she would clean up a department infested with corruption, racism and sexual assault.

Those hopes were dashed when Outlaw’s riot police rolled out with tear gas and rubber bullets against peaceful Black Lives Matter protesters in West Philly and on I-676.

An extensive report from Philadelphia City Controller Rebecca Rhynhart breaks it down in its entirety. According to the report, Commissioner Outlaw supported the use of CS Gas, also known as tear gas, on the people, which Mayor Jim Kenney opposed but nonetheless failed to show leadership and block its use.

“Teargas is banned in warfare and has not been used in Philadelphia for civil unrest since the MOVE crisis in 1985. Despite this, teargas was deployed on our own people several times during the unrest. The negative and painful effects of teargas cannot be overstated, and it should not have been used the way it was,” Rhynhart said, referring to the 1985 police aerial bombing attack on a home that left 11 dead and an entire city block burned to the ground.

“The report details how our own police department shot tear gas canisters down residential streets in West Philadelphia, hurting children in their own homes and innocent bystanders. This is not acceptable. It should not have happened, and I don’t want to see it happen in our city again,” she added.

And the heavy-handed tactics used by the police against the protesters contrasts with the hands-off approach police took toward white mobs. Police took no action when white vigilantes armed with guns and bats went to Marconi Plaza to fight the removal of the statue of Christopher Columbus and protect “western civilization,” or when pro-police mobs roamed the streets in the Fishtown neighborhood after curfew.

Outlaw, who along with her top brass were given gas masks, was on the scene when police were violent toward demonstrators, and she either did nothing to take control or left the scene. Outlaw, who used tear gas on protesters when she was the Portland police chief, says she will not resign. But she must.

In Portland in August 2018, Outlaw sicced Portland police on anti-fascist counterprotesters at a white supremacist rally held by Patriot Prayer and the Proud Boys. Some counterprotesters were sent to the hospital with serious injuries after police shot flash-bang grenades, pepper spray and rubber bullets directly at them.

“I tell you, ‘Meet me after school at 3:00. Right? We’re gonna fight’,” Outlaw told conservative radio host Lars Larson regarding the incident and her critics. “And I come with the intention to fight. And then you get mad because I kicked your butt. And then you go back and you wail off and whine and complain.” While not calling Antifa a terrorist group, she said they came to the event to “cause physical harm and confrontation.”

Outlaw was criticized for claiming Antifa protesters had weapons without providing evidence, and for sweeping protesters from an Occupy ICE encampment without the mayor’s approval. During her tenure, in 2019, the city witnessed the most fatal shootings of people in a mental health crisis by Portland police in nearly a decade. Ultimately, as a Black woman police chief, she provided cover to the city that could claim they weren’t racist, as the police cracked down on a racial justice movement fighting against police brutality and Nazis.

Black police officers have a choice when they join the force. Either they serve their communities and save lives, like Capitol police officer Eugene Goodman on the day of the Capitol siege, or they prey on the Black community and are just as violent as the white cops.

This is a message I heard constantly from community members and Black officers during my days as a police brutality activist in New York during the regime of Mayor Rudy Giuliani. Officers of color could be just as brutal, and those who sought justice and fought corruption and violence in the department were sidelined and ostracized, and sometimes received death threats from fellow officers.

Given its origins in the slave patrols of the plantation police state, law enforcement is inherently racist. White supremacists did not merely infiltrate the police forces of Philadelphia and elsewhere, they were always there. Hence, the calls to defund the police and reform, if not transform the function, purpose and structure of policing in America.

Like their communities, Black officers always faced discrimination, such as the Louisiana deputy who recently committed suicide over the racism in policing and the criminal justice system. In some departments back in the day, Black cops could not arrest white people. Black police formed their own organizations and even their own unions to push for reform and sidestep the white police unions that stood in their way.

As the National Association of Black Law Enforcement Officers noted, white privilege in policing was on full display on Jan. 6 as “white criminals, anarchists, segregationists, and domestic terrorists “ had a license to desecrate the Capitol and created a security failure, as recent events “made the world witness in real-time what Black and Brown American citizens have been saying for decades. There is both a conscious and unconscious level of institutionalized, systemic racism in the manner in which Black and Brown citizens are policed as compared to White citizens.”

Meanwhile, police chiefs — Black ones included — perpetuate systems of racial violence as they lead police departments whose officers brutalize peaceful protesters, and participate in the attempted overthrow of the U.S. government. “There will be officers from all of the U.S. connected to the insurrection in D.C. This will not be the last of these stories,” tweeted the Ethical Society of Police, a St. Louis-based organization of Black police officers founded to address racial discrimination.

If Black police chiefs such as Danielle Outlaw are unwilling and unable to do right by the community, they must get out of the way.