This week, high school players from an Oklahoma girls basketball team have broken their silence after a game announcer made headlines earlier this month for making racist remarks during one of their games.

Thursday, Norman High School girls basketball team found themselves thrust into the national spotlight after a broadcaster publicly made racist comments ahead of the team’s quarterfinal game.

theGrio reported on Friday that as “The Star-Spangled Banner” began to play, broadcasters informed listeners on the NFHS Network stream that they would return after a break. However, shortly thereafter, one of them didn’t realize his audio was still live. Everyone heard him as he used an expletive and a racial slur in seeming response to the Norman players kneeling during the anthem.

“They’re kneeling? F— them,” announcer Matt Rowan was heard saying in the audio. “I hope Norman gets their ass kicked. … F—ing n—–s.” 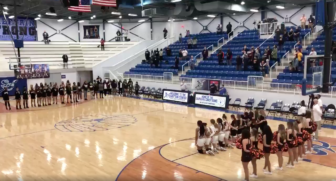 Despite Rowan’s wishes, the Norman High School girls basketball team known as the Tigers, went on to victory in the Oklahoma 6A state championship, capping off their (19-0) perfect season with a 48-37 win over Bixby on Saturday.

Sunday, the WNBA players’ association released a statement congratulating the team and showing support in the face of their unexpected controversy.

“To our young sisters, the future stars of our sport and rising leaders of this country: We cannot let another day go by without you hearing from us,” the statement read. “You demonstrated great courage and conviction in your decision to take a knee for justice. You clearly love this country and desire that it loves you back. We are with you. You have our support.”

Monday, the young women broke their silence by confirming that civil rights attorney  Ben Crump – whose high profile clients include the families of Ahmaud Arbery, Breonna Taylor, George Floyd, and Jacob Blake – would be representing them in the matter.

“We’re demanding that they who regulate the state tournament and all athletic sports in the state of Oklahoma will publicly condemn this racist, terrible, nefarious awful language directed at these young ladies for taking a stand,” Crump said in a clip obtained by TMZ.

“I took a knee to stand against social injustice and racism,” said Zaya Vann, one of the Black players on the team via video. “And when I first heard the news that our team was called the n-word I was just in disbelief. And the broadcaster should be held accountable so something like this doesn’t happen in the future.”

“Choosing to kneel was something that was a team decision. We all decided to do it,” said one of her white teammates, who also spoke out via Zoom. “They are all of my best friends and no matter what happens I’m always gonna stand by them… and stand with them against racism.”

After realizing his words had been heard by the public, Rowen later responded to the backlash by apologizing for his language, noting that he has type-1 diabetes. He claims he loses his ability to censor himself when his blood sugar gets too high, and that’s what was responsible for his lack of candor that evening of the game.