The rapper's latest documentary 'Stockholm Syndrome' premiered at Tribeca Film Festival on Sunday, and is said to chronicle 'the meteoric rise of this contemporary trendsetter.'

While at the red carpet for the premiere of his documentary Stockholm Syndrome at the Tribeca Film Festival on Sunday, the rapper opened up about his documentary and the support he’s felt from his celebrity friends, including his girlfriend Rihanna. 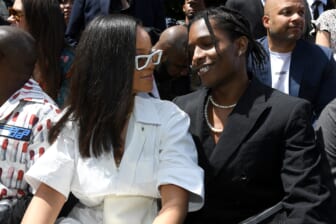 In an interview with Entertainment Tonight, A$AP Rocky beamed as he opened up about his latest project. When asked about the numerous celebrity friends who are supporting him, including his girlfriend Rihanna, he shared, “It was supportive having that support in real life.”

He continues to explain, “It’s amazing and I’m honestly truly blessed, for real.”

As theGrio previously reported, the rapper recently referred to Rihanna as “the love of his life” in an interview with GQ in May, sharing at the time, “[Relationships are] so much better when you got the One…she amounts to probably, like, a million of the other ones.”

He continued, “I just wanted to tell my story without really complaining or without, you know, seeming like a victim, or like I wanted a pity party or what not, so, here it is.”

Later in the interview, the rapper also teases what is to come for him in his career, seemingly excited about the future.

He explained towards the end of the conversation, “What’s next for me was what I was doing before I went to prison. Me and the prettiest muthaf—- ever, we breaking headlines and making history with creativity.”

As theGrio previously reported, Rocky’s highly anticipated documentary is a part of the line-up at this year’s Tribeca Film Festival. Check out the official synopsis for the documentary per the official Tribeca website, below:

“Harlem-bred Rakim Mayers rode a rocket to stardom as multi-platinum rapper A$AP Rocky, on the strength of his energetic performances, cutting edge fashion, and irreverent attitude. All of this came crashing to a halt in 2019 when he was thrown in a Stockholm prison following a violent altercation with a pair of local provocateurs.

Stockholm Syndrome chronicles the meteoric rise of this contemporary trendsetter, capturing the exuberance of youth and urgency of hip-hop in equal parts, before taking a detour into darkness.”