On Instagram, Samuels shared a photo of himself holding the swaddled newborn with the caption, "MR Straittt Jr is here!!"

Love & Hip-Hop stars Erica Mena and Safaree Samuels announced that their second child has arrived amid the couple’s divorce.

Samuels shared a photo of himself holding the swaddled newborn on Tuesday, with the caption, “MR Straittt Jr is here!!,” followed by several prayer hand emojis.

Straitt was the title of Safaree’s 2020 rap album.

He also posted an Instastory in which he shared a picture of the baby gripping his finger, writing, “Another me…. That’s all the world need.”

Mena hasn’t posted on social media about the arrival of their baby yet. Her most recent Instagram photo, from days ago, shows her heavily pregnant. She writes she’s “just trying to keep myself comfortable at this point.”

The couple has been estranged since late May after being married for a year and a half.

Mena filed for divorce in May and asked for child support and physical custody of their 1-year-old daughter, Safire, as well as exclusive use of their home. She says their marriage is “irretrievably broken” with “no hope of reconciliation.”

As previously reported, Samuels tweeted earlier this year “getting married was 1 of my BIGGEST mistakes and it will never happen again.”

His soon-to-be ex-wife responded: “since you always run to social media like a little girl I might as well join in. I absolutely agree with you on this. You are the most selfish, vain, and inconsiderate person. And not just with me but your only daughter!” 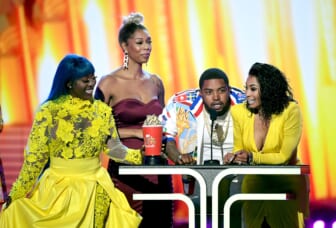 Despite the end of the marriage, the couple now has two children. Much of their union was depicted in Season 10 of Love & Hip-Hop: Atlanta. A release date for Season 11 has not yet been announced.

On the June 18 episode of The Wendy Williams Show, Mena’s Love & Hip Hop: Atlanta co-star Spice delivered a message from Mena to Williams. “She said you were right,” Spice told Williams. “I don’t know what you said, but whatever you said about Safaree.”

“I said don’t have him in the birth room when you deliver,” Williams replied. “Divorce him, and go on with your life while you’re still young and can get another.” The talk show hostess said she likes the rapper, but that he’s “trouble.”